Romeros is an alien investigator who looks like an alpaca. When he lands on Earth, he finds his spaceship damaged and becomes disconnected with his planet. He arrives on a mountain where a person wearing a weird mask is waiting for him.

Romeros is being held prisoner by the masked man, who is preparing to make Romeros into a meal. Romeros steals the key to his restraints and escapes from the masked man, but not before adding a "special ingredient" to the masked man's cooking pot.

Romeros is corned on a cliff by the masked man so he uses his secret weapon, a pill that makes his muscles grow exponentially. The masked man is intimidated to the point that he drops his knife, until it begins to rain and Romeros shrinks back to his normal size. After which, the masked man easily tosses Romeros through a rock face.

Romeros is being chased through a forest by the masked man and two bats, but he has to stop to pee. His pursuers sneak up on him as he urinates, causing him to spray one of the bats out of surprise, melting it. The masked man then lunges at Romeros with two machetes, but slips in the pee, landing face first in the puddle. The masked man writhes in agony as his face is melted off by the urine. 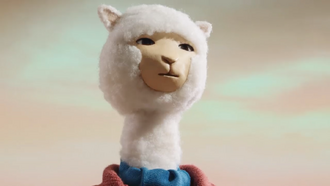 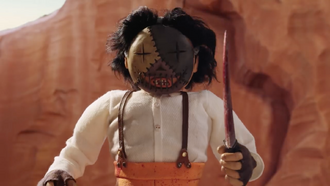