June 5-26, 2004[3][4]
Astro Boy (lit. Astro Boy: Mighty Atom in Japanese) is a remake of the 1960s anime series of the same name created by Osamu Tezuka, which was produced by his company, Tezuka Productions, Sony Pictures Entertainment and Fuji Television network. It was directed by Kazuya Konaka and written by Chiaki J. Konaka. The series premiered on Fuji TV and subsequently aired on Animax, who broadcast the series across its respective networks worldwide, including Japan, Southeast Asia, South Asia, East Asia, and other regions.

The series was created to celebrate the birth date of Astro Boy (as well as the 40th anniversary of the 1963 series). Under its original English name, it kept the same classic art style as the original Astro Boy manga and anime, but was reimagined and modernized with more lush, high-quality, near-theatrical animation and visuals. It combined the playfulness of the early anime with the darker, more serious and dramatic Science Fiction themes of the manga and the 1980s anime. The series premiered in Japan on the same date as Astro's birth in the manga (April 6, 2003) across Animax and Fuji Television.

Astro Boy premiered on Cartoon Network's Toonami block on Monday, March 8, 2004, but the series was not well received by viewers (as stated by TOM in the Astro Boy: Omega Factor Game Review) and the series was not shown to completion, only a total of 16 episodes aired. In fact, only 17 episodes of the series were aired in the U.S. before 2007, when Toon Disney aired the entire series.[5]

The show is set in the year 2043, where robots are a common part of humanity's everyday lives. In Metro City, the renowned Doctor Tenma disappears after trying to construct an AI robot using a new technology called Kokoro. Dr. O'Shay replaces Tenma as head of the Ministry of Science and discovers a boy-like robot, he brings it to life and names him Astro. Astro soon discovers he can fly via rocket boosters in his hands and feet, has superhuman strength, and other such abilities. Astro must deal with robots and villainous robot-hating humans who threaten his friends, fellow robots, and Metro City, becoming a hero in the process.

Astro — A robot built with "Kokoro", an advanced form of artificial intelligence, and also the protagonist of the show. Astro appears as a young boy who works as a superhero of sorts for Metro City. He continuously tries to stop the collapsing relationship between mankind and robots, despite numerous attempts to destroy him by various parties. He can fly using rocket boosters concealed in his limbs and possesses great strength. Astro was originally constructed by Doctor Tenma to recreate his deceased son Tobio, but Astro rebelled against Tenma when he saw how robots were brutally destroyed in an area of the Ministry of Science and was shut down by his "father".

Dr. Ochanomizu — Head of the Ministry of Science, Dr. Ochanomizu is an elderly man with a distinguishable large nose. He led the project to revive Astro and is his guardian and protector. Ochanomizu, like Astro, is very defensive of the relationship between mankind and robots, often defending Astro when he is accused of being dangerous to Metro City. He is portrayed as being a bit clumsy and quick to anger, but is very intelligent and compassionate.

Dr. Tenma — The main antagonist of the series and Astro's creator. Dr. Tenma was a former scientist working at the Ministry of Science, but lost his beloved son Tobio after showing him how discarded robots were scrapped. He built Astro to replace Tobio but found Astro was more powerful than he thought and shut him down. Dr. Tenma becomes somewhat insane and believes robots are superior to humans, and that Astro should be their leader. In the final episodes, he tries to coax Astro to his side but fails, only to be forgiven by Astro. Dr. Tenma then willingly surrenders himself to the authorities. In this series, it didn't show him creating Astro.

Detective Tawashi — A police inspector who has a large nose resembling a shoe brush. While at first he shows a distrust towards robots in general, he grows to trust those closest to him, including his own robotic partner Delta, and Astro. He often banters with Dr. O'Shay in arguments.

Epsilon — A female robot (hinted to be Australian) that protects Metro City's wildlife, most notably the marine animals. Also she can alter the weather however only uses her abilities for peaceful purposes.

Uran — Astro's younger sister, constructed by Dr. Ochanomizu with the same AI technology seen in Astro. She shows the ability to talk to animals and understand their languages, befriending a bird who she names Houdini. She has a rather excitable personality, but at times envies Astro for the amount of attention he receives and is overemotional at times too, but she also looks up to and protects her brother. She claims herself to be the biggest fan of the rocket ball player robot Harley.

Delta — A robot policeman that serves as the leader of the "Anti-Robot Robot Squad", a division of the police force.

Reno — A close human friend of Astro. He originally started off in a robot circus where he disguised himself as a robot to avoid being separated from the other robotic performers whom he saw as his family. He becomes a student of Dr. Ochanomizu's and becomes quite skilled around robotics, but still maintains his acrobatic skills from the circus.

The Blue Knight — A gallant anti-hero of sorts who was badly treated by humans and was rebuilt by Dr. Tenma and Shadow to act as a catalyst to boost Astro's power. He instead decided to wage war against mankind to bring freedom to robots. He dresses in blue armour and rides a white horse, his main weapon being a laser-based lance of sorts. He ultimately builds a robotic empire towards the end of the series.

Shadow — A highly intelligent robot created by Dr. Tenma to help him make Astro stronger. He wore a mask over his face for most of the season, eventually revealing his face after some reconstruction to be based on Dr. Tenma's.

Drake — A secondary antagonist of the series. Drake is a politician who deeply hates robots, particularly robots with AI. He grows more paranoid over the course of the series, haunted by memories of a robot he knew in the past whom he considered his friend but drove him to his hatred for machines.

Skunk — A recurring villain who uses robots to commit various crimes, showing no concern and care for the robots he uses. Before his final capture, the police told Astro that he was one of Metro City's most dangerous criminals. He acts as a secondary antagonist throughout the series.

Pluto — A powerful combat-based robot built by Shadow to challenge Astro and other robots including Epsilon, Hercules, Harley and Delta. He gains emotions and befriends Astro and Zoran, and commits suicide to save the two from a clone of him, plunging into a volcano. However, he is rebuilt later on in the series.

Nora — A yellow, cylindrical robot which acts as Dr. O'Shay's housekeeper as well as a nanny, who takes care of Zoran. She appears in most of the episodes, although having a relatively minor role which has little impact on the storyline.

Duke Red — The primary antagonist of the later episodes, Duke Red is a high-ranking officer who thinks of robots as mere tools. His hatred towards them later intensified after his domestic robot supposedly tripped his daughter. In the final war, he is the leader of the human troops.

Kenedy, Abercrombie, and Alejo — Astro's good friends and schoolmates. Kenedy plays soccer for his local team and has somewhat of a short temper. Alejo is portrayed as a science geek that is fascinated by Astro. Abercrombie is a bully that, at first, dislikes Astro, but soon becomes friends with him. Astro, along with Kenedy, Abercrombie, Alejo, and a robot named Denkou, were also the founding members of a club called the "Skyriders".

Denkou — A small robot who has the power to turn herself invisible. Her debut is in the episode Into Thin Air. Although this episode is her first major appearance, she is a minor character in the series. 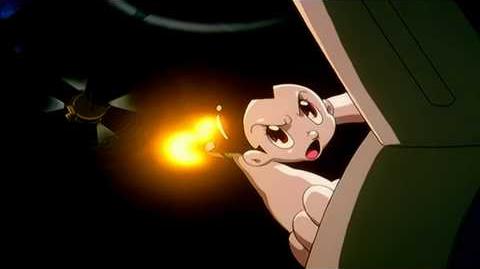 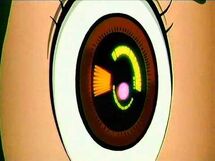 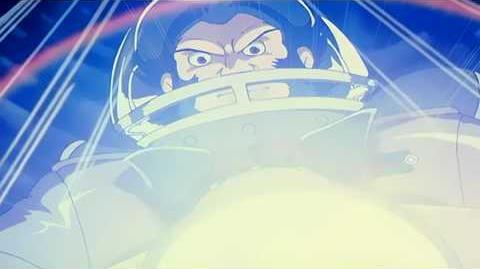 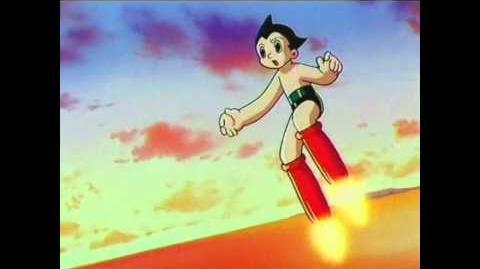 The episodes aired in the U.S. in a different order than the original order (shown by the episode numbers, which go by broadcast order). The series originally consisted of fifty episodes, but in America, one episode was omitted called "Dawn of the Techno Revolution" and replaced with a clip show episode. Many episodes of the series can be regarded as "free-standing" in as much as they do not have anything to do with the series' major story arcs, but overall, the 2003 series can be regarded as having a well-defined beginning, middle and end. Although the series appears to initially have two main plot lines - Doctor Tenma's eventual plans for Astro to evolve and another plotline about robot rights - these two story arcs dovetail toward the end of the series.

All episodes of Astro Boy have been released on DVD in the United States, including a complete box set produced by Mill Creek Entertainment, and released in 2015.