52 (List of Episodes)
Bakugan Battle Brawlers is a Japanese action adventure anime television series produced by TMS Entertainment and Japan Vistec under the direction of Mitsuo Hashimoto. The story centers on the lives of creatures called Bakugan and the battle brawlers who possess them. Though initially a failure in Japan, the series became popular in the United States and Canada, prompting the creation/order of several follow-up seasons (New Vestroia and Gundalian Invaders) which aired in other countries before Japan. The fourth and final season, Mechtanium Surge, was never broadcast in Japan and instead aired in Canadian and U.S. markets.

The Bakugan franchise is a co-production from Nelvana Enterprises, Spin Master, Sega Toys and TMS Entertainment, with animation by TMS Entertainment in association with Sega Toys. The English-language version premiered on the Canadian network Teletoon in July 2007 and then on Cartoon Network on February 24, 2008.[2]

Bakugan Battle Brawlers premiered on Cartoon Network's Toonami block on March 22, 2008, and only ran for one week, after which it was replaced by Blue Dragon.[1]

Dan Kuso's life changed one day when random cards fell out of the sky. He and his friend Shun invented a game called Bakugan with these. Together with his friends Runo, Marucho, Julie, Shun, and Alice, they form the Bakugan Battle Brawlers and its members are accidentally dragged into fighting for the fate of Vestroia (the Bakugan's home dimension) against the Doom Beings.

Daniel "Dan" Kuso — The human main protagonist in the series. Dan is an impulsive 12-year-old boy who, after creating the rules for Bakugan, wants to be the number one Battle Brawler. However, after teaming up with a Pyrus Dragonoid named Drago, Dan starts to realize there are more important things. He is 12 years old in the first season, 15 in New Vestroia, 16 in Gundalian Invaders, and 17 in Mechtanium Surge. In the beginning he is ranked #121, and by episode 39, he is ranked #1, and has become ranked #4 or under in episode 6 of Mechtanium Surge.

Shun Kazami — The former 1st ranked Bakugan brawler but after Masquerade showed up, he moves down to 6th, then back up to 5th after defeating Komba, then 2nd and ultimately to 3rd by the end of the first series. He is 13 years old, has black hair, which is tied into a long ponytail, and wears a purple jacket. He is a master of Bakugan and co-created the rules with Dan. He is also Dan's childhood best friend. Shun is a loner, a boy of very few words, but yet is willing to help his friends at almost every turn. He is a Ventus brawler and he approaches Bakugan like a ninja. He lives with his grandfather, who used to be a famous ninja warrior, who once expected Shun to follow in his footsteps instead of playing Bakugan. His Guardian Bakugan is a Ventus Skyress, whom Shun received from his sick mother.

Choji "Marucho" Marukura — He loves to play Bakugan, but is fonder of creating strategies rather than just using brute force. He used to be very obedient to his parents just because he wanted to please them, but that changed when he met the Brawlers and Preyas. He now has no regrets for the past, realizing that he only wanted to make his parents happy. He is an Aquos battler. His guardian Bakugan is his Aquos Preyas, which, later in the series, is revealed to have a special evolution, allowing him to burp up his two twin brothers, Preyas Angelo, who resembles an angel, and his brother, Preyas Diablo, who resembles a devil, and this allowed Marucho to not only keep Preyas in his original form, but his 'brothers' as well.

Runo Misaki — A 12-year-old tomboy who loves playing Bakugan against skilled people so she can show off. Runo is a Haos brawler. She is also Dan's girlfriend. She also made out with him many times. Her Guardian Bakugan is a Haos Tigrerra (the others being Terrowclaw and Saurus), who is very obedient and powerful in battle. Tigrerra later evolves into Haos Blade Tigrerra.Though underage (in the first season), she helps her parents run their family business in a cafe. Alice also works there. Runo is a bit jealous of Alice because she attracts a lot of the guys at the cafe, which draws attention away from her.

Julie Makimoto — A 12 year old girl from Australia who tries to stay happy even when the worst has happened (for example, when Billy ended up under the control of Masquerade); she acts happy after something bad happened but she generally does that just to cover up her true feelings. Julie forgets things easily, proving that she is a little scatterbrained at times. In the Japanese version, Julie spices her speech with American phrases, differentiating her personality from the others. She is a Subterra battler and her guardian Bakugan is her Subterra Gorem. Gorem then evolves into Subterra Hammer Gorem. Julie has a sister named Daisy who has bested her in everything since she was a child. She reached 8th in the rankings. She chose not to brawl against Zenoheld in the final showdown as Gorem did not want to put her into trouble. She returns in Gundalian Invaders as a neighbor of Dan's once he moves. She hates Dan. She works at a cafe and in Revelation, it is revealed she is a cheerleader for the team Jake plays for. This strongly suggests she is already in high school in her first year with Dan. She's believed to be about 16 years old. In Brawler To Be, Jake is having his first battle and Jake gets scared, so Julie teaches Jake some lessons. Her role is basically that of a supporting character. Julie returns in Mechtanium Surge as a news reporter.

Alice Gehabich — A 13-year-old girl from Moscow, Russia. Although she knows almost everything about the game, she rarely plays it. She usually just gives advice to the other brawlers, which she prefers over battling. Alice is kind and caring worried for others and does not think of herself. Alice was sometimes unconsciously possessed by "Masquerade" (her mysterious alter-ego), and with a sudden jolt, her hair rises up and turns blonde, and clothes and a mask come out of nowhere on her, and finally, she turns into a male. This was caused by her exposure to the Silent Core. Alice might seem to be less important than the other brawlers, but in fact she plays an important part, not as Masquerade, but without her, the brawlers might have already lost to her alter ego.

Joseph "Joe" Brown — In the first season, it was revealed that due to an unknown health condition, he basically lived in a hospital for some time. During this time, the Brawlers thought that he was working for Masquerade. After Dan confronted him, he told Dan that he would only tell him the truth if Dan could beat him in a battle. In the middle of the battle, Joe fainted, and when he awoke he revealed that the brawlers' theory was untrue and he actually sent a message to all of the Bakugan players around the world to warn them that Masquerade was plotting against them. After the truth was revealed, they asked him if he wanted to become a Battle Brawler, which he gladly accepted. 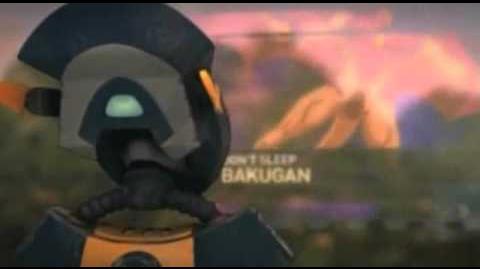 Bakugan Battle Brawlers is a 52 episode Japanese anime series produced by TMS Entertainment and Japan Vistec under the direction of Mitsuo Hashimoto. In North America, eight DVD compilations were released by Warner Home Video between August 26, 2008 and July 6, 2010. Volumes 1 and 6 contained 5 episodes each, volumes 2 through 5 each had 4 episodes, and the seventh and eighth volumes, titled Chapter 1 and 2, each had 13 episodes.

The series aired on Cartoon Network's Toonami block only once, on March 22, 2008, replacing the cancelled series One Piece. However, the following week, Bakugan was itself removed from the block and replaced with another new series, Blue Dragon.[1]