20 (List of Episodes)
Ballmastrz: 9009 is an American animated series, created by Christy Karacas and produced by animation company Titmouse, Inc., that officially premiered on April 8, 2018 on Adult Swim. However, the pilot for the series originally aired in 2015.[2] The series is characterized by anime-style iconography, dark humor, adult jokes, and shock value. The series' second season premiered on February 23, 2020. The series is rated TV-14 on Adult Swim.

In a post-apocalyptic world that has been ravaged by a string of devastating "Rad Wars," a god-like entity named Crayzar founds a bloodsport known as "The Game," in which two teams try to kill each other using a ball. The Game has made sure there were no more wars. Gaz Digzy, is a washed-up superstar for the Boom Boom Boys, and notorious party gal who, after a spiral of destructive antics, is demoted to The Leptons, the worst team in The Game. Her only way back to the top is to somehow lead these pathetic misfits and “ultimate losers” to victory.

Gaz Digzy — a Queens-accented star member and a former captain of the Boom Boom Boys who wrecked her own career due to sheer boredom and subsequently found herself teamless, out of shape and maligned by various diseases. She is a foul-mouthed, hard-drinking has-been whose only hope is to join the Leptons and reclaim her glory.

Ace Ambling — a 12-year-old orphan and the lead player of the Leptons. He is bright, cheerful, and optimistic, but will lose his patience when things don't go as planned. He looks up to Gaz, and though he seems oblivious to her indifference to him, he eventually realizes her flaws and tries to bring out the best in her. Despite his cheery demeanor, he does feel sad when he feels neglected or looked down upon by the team.

Babyball — a crass and cynical ball member for the Leptons. Similar to Gaz Digzy, he looks down on his own team and wishes for better players. However, he can access a special ability when paired with Ace, whom he dislikes due to his cheeriness.

Flypp Champion — a body stump with a sensory deprivation helmet. A true warrior, Flypp must rely on his navel to perform certain tasks. Despite claiming to have amazing abilities, which he arguably does, he still seems rather useless, and is usually brushed aside with ease by other players. He was apparently once a great defender of the innocent, but through a series of training regimes he chose to simplify himself and put all his energy in his power Umbilicus, a large umbilical cord that extends from his navel.

Duleena "Dee Dee" Duneeda — an anime-esque girl on the Leptons. She is usually softspoken and cares for her teammates, but will occasionally explode in a rage when provoked. She is also shown to have a crush on Leto Otel and gets angered when he tries to downplay it. She is a former vampire hunter and thus has a large knowledge about the occult.

Leto Otel — a very lethargic and pessimistic member of the Leptons. He lacks the motivation and prowess to actually be effective and does not seem interested to the point that he is not phased about having mortal injuries. He quotes poetry and seems intelligent at times.

Lulu — a giant, green, bestial creature and member of the Leptons who, despite her intimidating appearance, is afraid of everything.

Bob — a grey alien, who appears to be totally useless and is typically the member of the Leptons that gets beaten the worst.

Crayzar — the ruler of the new world who created the Game to please humanity. He has lived for thousands of years and lacks any sort of genitalia, as he is implied to be some type of artificial lifeform. He has lived through the Rad Wars and gave life to all the game balls, which were originally used as weapons in the Rad Wars. 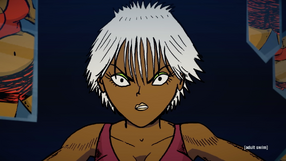 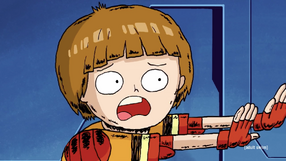 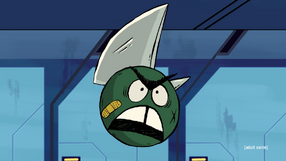 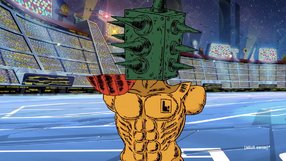 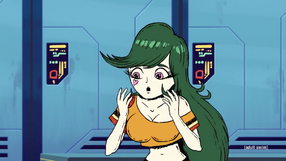 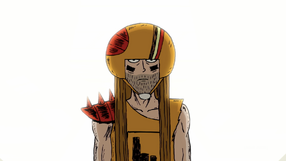 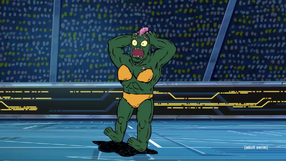 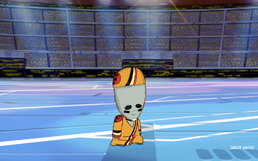 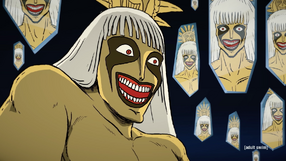 Ballmastrz: 9009 premiered on Adult Swim's Toonami block on June 6, 2020, replacing JoJo's Bizarre Adventure in the 2:00 AM time slot.[1] As each episode is only 15-minutes, two episodes are aired each week to fill a half hour time slot. The series was removed from Toonami after August 8, 2020, before it could air its final 2 episodes on Toonami. It was replaced in the lineup by Assassination Classroom after two weeks of Batman movies.