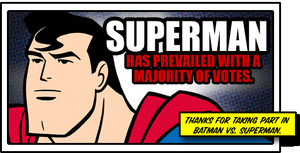 Batman VS. Superman was a Toonami Event and Contest which ran from Monday, January 21, 2002 through Friday, January 25, 2002. Every night, Monday-Friday, Toonami aired back-to-back episodes of Batman: The Animated Series and Superman: The Animated Series from 6:00 PM - 7:00 PM. Viewers could then log on to Toonami.com to view the site's first "gomic," an exclusive interactive hybrid combining a video game and a comic, to cast their vote for the superhero of their choice.[1]

On Saturday, January 26, there was a six-hour marathon from 1:00 PM - 7:00 PM. At 5:00 PM, the winner of the online vote was revealed to be Superman and the final two hours were dedicated to the victorious superhero.[1]

Beginning on Monday, January 21 and throughout the week, fans were able to go to Toonami.com to play "The World's Finest: The Gauntlet of Doom," an exclusive comic and online game and to vote for their favorite superhero. Each day, one of five comic book covers became active with each day's comic coming to a close by positioning both Batman and Superman in a competitive challenge against an enemy. The player selected the superhero that they thought was best equipped to beat that enemy and that choice counted as one vote in favor of either Batman or Superman.[4]

Retrieved from "https://toonami.fandom.com/wiki/Batman_VS._Superman?oldid=48874"
Community content is available under CC-BY-SA unless otherwise noted.