46 (List of Episodes)
Ben 10: Alien Force is a 46 episode American animated series created by team "Man of Action" (a group consisting of Duncan Rouleau, Joe Casey, Joe Kelly, and Steven T. Seagle), and produced by Cartoon Network Studios. It takes place five years after the series, Ben 10. The series takes a different turn than its predecessor, taking on a somewhat darker tone. It was nominated for four Emmy Awards, winning one for Outstanding Sound Mixing - Live Action and Animation. The series premiered on Cartoon Network on April 18, 2008[2], in the United States and ended on March 26, 2010. This series is followed-up by another sequel series titled, Ben 10: Ultimate Alien.

The series premiered on Cartoon Network's Toonami block on May 24, 2008[1] and stayed on the block until its demise on September 20, 2008. The series also appeared on Toonami Jetstream.

Five years after the original series, 15-year old Ben Tennyson has returned to a normal, everyday life. His adventures all done, Ben has taken off the Omnitrix and has grown from a young boy into a confident teenager; however, the mysterious disappearance of Grandpa Max makes Ben put back the Omnitrix again, as well as forcing him, his cousin Gwen, and his old enemy Kevin to search and locate Grandpa Max. At the same time, they must enlist the help of the Plumbers' kids (children or grandchildren of retired Plumbers which are commonly half human and half alien) and repel attacks from a new enemy, the Highbreed.

In the third and final season, Vilgax returns as the main antagonist forcing Ben, Gwen, and Kevin to tackle bigger problems and find out more secrets about the Omnitrix.

Ben Tennyson — At the age of fifteen, Ben fills the role of the leader after Grandpa Max mysteriously disappears. The Omnitrix has recalibrated, giving him access to a new set of alien heroes. Over the past five years, Ben has matured dramatically, and has gained wisdom.

Gwen Tennyson — At the age of fifteen, Gwen is much more skilled and proficient with her magical powers, able to control and manipulate pure magenta/fuchsia-colored magical energy directly as opposed to casting magic spells and reciting incantations (this is eventually revealed to be due to Gwen having an alien heritage from a free-spirited alien race called "energy beings" or Anodites), where she can freely create, control and manipulate pure magenta/pink/fuchsia-colored energy to create incredibly strong magenta energy blasts, energy bursts, energy waves, energy beams, shields, barriers, and energy-like grapple holds. Although she's not nearly as fiery or short-tempered as before, Gwen is still always looking out for her cousin Ben.

Kevin Levin — A former nemesis of Ben, Kevin is now getting by as an alien tech dealer. He unintentionally gets involved in the Highbreed plot, and joins Ben out of a desire to make up for his actions. His Osomosian abilities now allow him to absorb the properties of any solid matter he touches.

Julie Yamamoto — Julie is Ben's love interest and girlfriend in the series. She enjoys tennis, eating chili fries, and caring for her pet, Ship (an alien Galvanic Mechomorph found by her and Ben)

Max Tennyson — Max is a semi-retired member of the Plumbers and Ben and Gwen's grandfather. He disappears while investigating the Highbreed plot, leaving only a few cryptic messages for Ben to find. He is briefly reunited with his grandchildren in "Max Out", but sacrifices himself to destroy a Highbreed factory at the end of the episode. In the episode "Voided", Ben and Max reunite in the Null Void, and he promises Ben that he'll come back soon. He eventually returns in the second season finale of the show to aid Ben in his final assault against the Highbreed.

Humungousaur- A humanoid dinosaur that has super strength and can grow taller than he already is.

Chromastone- A humanoid crystal like alien that can shoot energy beams.

Brainstrom- An intelligent crab with the abelite to shoot lighting from his brain.

SpiderMonkey- A blue monkey with the abilities of a spider.

Goop- A living green piece of slime with acid powers and has a anti gravity projector that lets him fly.

Alien X- A power alien who has the abelite to do anything just by thinking it, but the power is limited by two heads in alien which has to agree to what alien x can do.

The Highbreed — The Highbreed believe themselves to be the purest and most powerful of all species, and intend to cleanse the galaxy of impure lower life forms. It was later revealed that they were dying out, having become sterile and vulnerable to disease due to heavy inbreeding, and that they intend to destroy the rest of the universe with them.

DNAliens — Hybrids of humans and alien drones that serve the Highbreed called Xenocytes, the DNAliens are able to disguise themselves as humans using special identity masks, called ID Masks.

Vilgax — Vilgax returns in Season 3 with new powers and abilities. He loses to Ben in the episode "Vengeance of Vilgax" and was banished from Earth, though he swore vengeance. Keeping his promise Vilgax returned in the episode "The Final Battle" to procure the Omnitrix and destroy Ben, but was unsuccessful.

Albedo — Albedo is a young and arrogant Galvan. At one point, he was the assistant to Azmuth, whom he asked for an Omnitrix of his own. When Azmuth refused, he built one of inferior quality and synchronized it to work exactly like Ben's; but as Ben's form is the default, Albedo was transformed into a clone of Ben (until his Omnitrix came into contact with Ben's, giving him whitish-gray hair, a dark red jacket, black pants and deep red eyes). As a result, he also developed many of Ben's habits, which he considers utterly repulsive. 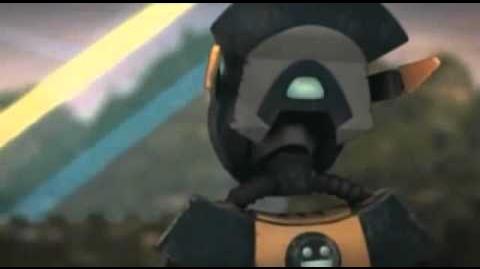 Originally, series producers Dwayne McDuffie and Glen Murakami designed the first 26 episodes to be the first season. Cartoon Network, without their consent, split the order into the first two seasons. At the 2008 Comic Con, series producers revealed the show was picked up for a third season. The third season was revealed to have 20 episodes (instead of the usual 13) on story editor/executive producer Dwayne McDuffie's forum.

All episodes of Ben 10: Alien Force have been released on DVD in the United States.

Ben 10: Alien Force premiered on Cartoon Network on April 18, 2008, in the United States and ended on March 26, 2010. The pilot of the series set a record as the most-watched original series premiere in Cartoon Network history among various young age groups according to preliminary data from Nielsen Media Research. The one-hour premiere also scored as the highest-rated telecast of the day on both cable and broadcast among similar age groups.[2] Internationally, the series also aired on Cartoon Network in the UK, beginning on May 5, 2008, as well as Teletoon in Canada beginning on September 6, 2008.