7:00 PM
Bionicle 2: Legends of Metru Nui is the second film in the Bionicle series and is a prequel to Bionicle: Mask of Light. This movie was released on October 19, 2004 as a direct-to-DVD release and was the last film in the franchise to be given a rating by the MPAA.

In this film, Vakama recalls events that took place long before the classic Bionicle stories at Mata Nui, during which he, along with his friends Nuju, Matau, Onewa, Whenua, and Nokama were chosen to be the new Toa of the island of Metru Nui. To save the city, they must prove themselves worthy Toa, find their mask powers, and protect the "Heart of Metru Nui." However, they also find themselves caught up in the schemes of the evil Makuta.

The film received mixed reviews, with some noting the filling-in of major plot holes that had been present in the first film. The series also continued to be praised for its visual effects and musical score. It was followed by a sequel film, Bionicle 3: Web of Shadows.

The film begins with Turaga Vakama describing a land that existed before Mata Nui called Metru Nui. The residents of the great city believed that the warriors known as the Toa would protect them, but eventually they were all defeated by an unrelenting shadow that sought to conquer the city.

Lhikan, the last remaining Toa, travels throughout the entire city, giving Toa stones to six Matoran: Whenua, Nuju, Matau, Onewa, Nokama, and Vakama. After giving the last stone to Vakama, Lhikan is captured by two Dark Hunters called Nidhiki and Krekka. Vakama later meets the other Matoran at the Great Temple in Ga-Metru; there, they are transformed into six new Toa. After Vakama has a vision, they all set out to recover the six Great Disks hidden throughout Metru Nui, hoping to prove to Turaga Dume, the city's leader, that they are worthy Toa.

The Toa Metru retrieve the discs and bring them to the Coliseum, but Dume issues that "small gifts" won't confirm them as Toa, and proceeds to test them by starting a sea of rising metal in the Coliseum. When the six fail to pass the test, Dume denounces them as "imposters" and unleashes the Vahki (the city's law enforcers) upon them. In the ensuing commotion, Onewa, Nuju, and Whenua are sucked into a massive vortex and imprisoned while Vakama and the others escape the Coliseum by leaping into a chute system, with the Dark Hunters giving chase.

Vakama, Nokama, and Matau abandon the chute system at Ko-Metru when the Dark Hunters get the flow reversed. Reaching the ground, Vakama spots Lhikan’s "spirit star" soaring overhead; as long as it burns in the night sky, it means that Lhikan is still alive. The trio hitch a ride on a Vahki transport to follow the star. Arriving in Po-Metru, they are suddenly ambushed by the Dark Hunters, but lose them when a herd of Kikanalo beasts stampedes through the canyons. As the Toa Metru flee, Nokama discovers that her mask allows her to speak and understand foreign languages, including that of the Kikanalo. She stops the stampede and speaks to the leader of the herd, who tells the Toa that Lhikan was taken by the Dark Hunters to the "Canyon of Unending Whispers". With the help of the Kikanalo and Matau's newly discovered mask power of illusion, the Toa Metru bypass the Vahki guarding the canyon, as well as the Dark Hunters.

Meanwhile, Onewa, Whenua, and Nuju are trying unsuccessfully to break out of prison when they are approached by a mysterious Turaga, who explains that Toa mask powers are needed to escape. To teach them how to find their mask powers, the Turaga puts them through a test in which they perform seemingly pointless tasks. Eventually, during an argument with Whenua, Onewa discovers his mask power, mind-control. Nuju, trying to halt their quarrel, also discovers his mask power, telekinesis, which he uses to create a way out. As they traverse the tunnels of Onu-Metru, Whenua finds his mask power, night-vision, before the four reunite with Vakama, Nokama, and Matau.

To their surprise, the Turaga reveals himself to be Lhikan, whose power was drained from him when they became Toa. He inquires as to the safety of the "Heart of Metru Nui", which Vakama believed was Lhikan himself, but is actually the Matoran. As Vakama despairs at the misinterpretation, he discovers a small canister that contains Dume; the Dume from before was an impostor. Pursued by the Vahki, the Toa Metru, along with Lhikan, set out to stop the false Dume, who has summoned the Matoran to the Coliseum to be placed in canisters. By the time the Toa Metru and Lhikan arrive, all the Matoran are now asleep.

The false Dume is revealed to be the Makuta in disguise. Having betrayed the Great Spirit Mata Nui and the Matoran, Makuta plunges the former into slumber and begins absorbing energy from the city. The Toa rush to find the Matoran, but only a small amount can been carried on the transport; the rest will have to wait. The Toa gather as many Matoran capsules as they can and race to escape the crumbling city. On the way out, the Dark Hunters attack them again, but are killed, along with a Nivawk (Makuta's spy), when the Makuta absorbs them.

Before becoming a Toa, Vakama was a Mask Maker in Ta-Metru, creating Kanohi masks from Kanoka disks. Prior to the start of the movie, he was requested by the false Dume to create the legendary Mask of Time. Initially, he was not successful, but he is now able to create the Mask of Time out of the six Great Disks. As the heroes make their way away from Metru Nui, Vakama realizes that Makuta wanted control of time to accomplish his goals.

To save the Matoran, the Toa must "follow the light" to a place far beyond Metru Nui. However, they are met en route by Makuta, now an almighty winged being. Donning the Mask of Time, Vakama confronts Makuta, but, unable to fully control the power of the mask, he only slows time down, rendering him unable to dodge the Makuta's next attack. Lhikan intervenes and takes the attack himself, but is fatally injured and dies moments later with Vakama at his side, while Makuta claims the Mask of Time.

Anguished, Vakama discovers his mask power, invisibility, which he proceeds to use against Makuta. With a single shot from his Kanoka disk launcher, Vakama knocks the Mask of Time out of Makuta's hands and into the sea. The enraged Makuta attempts to kill Vakama, but is defeated when he accidentally grabs a humongous boulder, causing him to be embedded into the Great Barrier. Vakama's fellow Toa join him, and they combine their powers to seal Makuta in a protodermis prison. Vakama glances back towards Metru Nui one last time, and then continues with the other Toa towards the light, arriving on the island of Mata Nui.

Just as Lhikan sacrificed his power to create the Toa Metru, Vakama and his friends now do the same to awaken the Matoran, a process that transforms them into Turaga. One of the Matoran, Takua, leads Vakama to another Matoran, Jaller, whose mask has been damaged. Vakama gives him Lhikan's mask, and the other Matoran cheer as the symbol of the Three Virtues (Unity, Duty, and Destiny) materializes in the skies above. 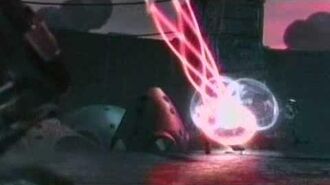 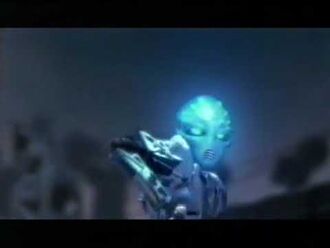