24 (List of Episodes)
Black Lagoon is a Japanese anime series based on the manga series of the same name. The series was produced by the Japanese production company Madhouse, and aired on Chiba TV from April 8, 2006 to June 24, 2006, for a total of twelve episodes. A second season, labeled Black Lagoon: The Second Barrage, ran for twelve more episodes on Sendai Television from October 2, 2006 to December 18, 2006. The second season focuses less on character development than the first season and more on the jobs they do. A five volume original video animation series, titled Black Lagoon: Roberta's Blood Trail, was released from July 2010 to June 2011.

Rokuro Okajima is meek, mundane, and metropolitan. His business trip to South East Asia turns from pleasure cruise to festival of pain when modern pirates board the ship and take him hostage. Revy, Dutch and Benny are merciless, maniacal, and mean. Together, they make up the crew of the Black Lagoon. Making a living in a city where the most villainous of villains make themselves at home isn't without its risks, but they take on any job available to them. Smuggling guns, drugs, kidnapped children, and stolen goods is all part of a hard days work.

Their base of operations is located in the fictional harbor city of Roanapur in southeast Thailand (somewhere in the Amphoe Mueang Trat district, likely on the mainland north/northeast of the Ko Chang island or on the island itself). They transport goods in the 80-foot (24 m) Elco-type PT boat Black Lagoon. Lagoon Company does business with various clients, but has a particularly friendly relationship with the Russian crime syndicate Hotel Moscow. The team takes on a variety of missions—which may involve violent firefights, hand-to-hand combat, and nautical battles—in various Southeast Asian locations, even going as far as Phu Quoc island of Vietnam and when not doing much, the members of the Lagoon Company spend much of their down time at The Yellow Flag, a bar in Roanapur which is often destroyed in firefights.

Black Lagoon includes a considerable amount of graphic violence, often involving violent gun fights and spectacular physical feats in battle. Many of the characters who are most skilled with weapons (mainly guns) are women, thereby bearing a similarity with "girls-with-guns" genre with the six strongest women in the series adhering to some type of stereotype (dragon lady, referring to Revy, maids, referring to Roberta and Fabiola, nuns, referring to Eda, etc.). Some of the scenes and dialogue are within the realm of dark comedy, as humorous moments occur or are mentioned during and after many violent battles.

Rock (Rokuro "Rock" Okajima) — is the main protagonist of the series. He is a Japanese salaryman who joins the crew of the Black Lagoon after they kidnap him. Rock does not fight but is an excellent negotiator and translator, and apparently does the accounting for the Black Lagoon Company. He is often scared by the methods Revy sometimes uses to achieve her goals. He appears to be quite intelligent and can talk himself out of trouble as seen when he manages to talk a very angry Balalaika out of shooting him for arguing with her. Dutch states that he sees a darkness in Rock as well as in Benny. As the show progresses Rock's personality seems to change as he does not like to take violent measures or harm others but starts to care less when others suffer starting with Gretels death at the hands of Balalaika.

Revy — is the female protagonist of the series, she provides the muscle for the Lagoon Company. She is of Chinese descent and grew up in New York City. Revy is exceptionally skilled with using firearms in battle, but is not much of a people person. She enjoys killing her enemies and seldom stops to negotiate. Despite her usual indifferent demeanor, her tendency to enjoy taking the lives of others is a result of her internal emotional instability, as evidenced by her more conflicting interactions with Rock. While her personality constantly clashes with Rock's, she seems to spend quite a bit of time with him and admits that she does consider him her friend. It is possible she has romantic feelings for him since she can never seem to give Eda a straight answer when she asks about her and Rocks sexual relations. Her signature weapon is a brace of custom-made stainless steel 9 mm Beretta 92 "Sword Cutlass Special" pistols. Her nickname "Two Hand" reflects her ability to use both pistols simultaneously. Because Japanese-to-Western transliteration conflates R with L, and B with V, her name is sometimes rendered as Levy, and sometimes attributed as a nickname for Rebecca (which she has identified herself with in the English dub).

Dutch — is the leader of the Lagoon "trading company." An African-American, he captains the PT boat Black Lagoon, and coordinates his crew. Although he seldom participates in battle, he is still a deadly adversary, stemming from his time as a Marine in the Vietnam War. He is much smarter than he appears and can easily read people intentions and feelings. He seems to have some past relation with Balalaika where either one or both of them owe the other some form of debt. He is always calm and level headed and keeps Rock and Revy's emotions in check and keeps them thinking clearly.

Benny — is a former post-graduate student at the University of Central Florida. He is of Jewish descent and serves as the Lagoon's technical expert. He joined the crew when he "managed to piss off the FBI and the mafia at the same time" prompting Revy to step in and save him, offering him a job with Lagoon. Like Rock, he is not a gunfighter and does not have the capacity to kill in cold blood. However, he is hardened to the job and willing to overlook almost anything to get the job done. 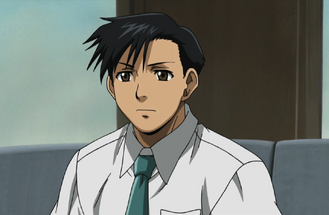 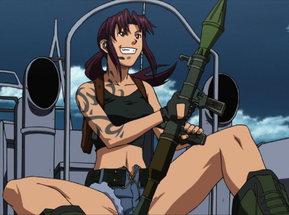 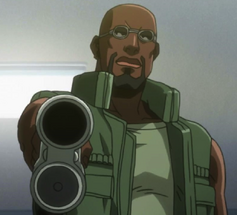 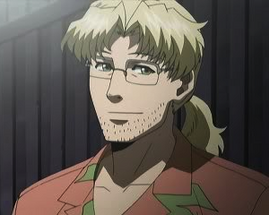 Black Lagoon consists of two seasons and one 5 episode original video animation series. All twenty-four episodes of the series were released in Japan on DVD across twelve volumes from July 26, 2006 through June 27, 2007. Blu-ray Disc releases—eight volumes in total—followed from December 23, 2009 through March 25, 2010. In North America, these seasons were first released across six DVD volumes with English and Japanese audio tracks and English subtitles from May 22, 2007 through October 28, 2008. The first three of these were distributed by Geneon Entertainment itself before Funimation Entertainment took over distribution of the series in mid 2008, and released a hybrid DVD and Blu-ray Disc collection of both seasons on December 4, 2012.