January 30, 2009
Blue Dragon is an anime adaptation of the video game series with the same name. The series was directed by Yukihiro Matsushita, animated by Studio Pierrot and co-produced by SKY Perfect Wellthink, TV Tokyo and Pierrot. The series began airing on TV Tokyo on April 7, 2007, featuring a different vocal cast than that used for the game. It also ignored most of the game's plot, and ran for 51 episodes. A sequel season to Blue Dragon, titled Blue Dragon: Trials of the Seven Shadows premiered on TV Tokyo on April 5, 2008.

On April 16, 2007, Viz Media announced that it had licensed the series for release in North America and Europe. An edited English language dub of the series premiered in the United States on Cartoon Network on March 28, 2008. The series then began airing on Cartoon Network's Toonami block on March 29, 2008, replacing Bakugan Battle Brawlers. The series also aired on Toonami Jetstream until Jetstream was cancelled on January 30, 2009.

As Shu's village was being attacked by an unknown enemy, he and his friends Jiro and Kluke decide to defend their home. They soon meet warrior Zola and receive the powers of Shadow, an ability that lets them transform their shadows into powerful monsters. Shu receives one of the most powerful monsters, Blue Dragon, and they all set out to defeat their enemy.

The characters of Blue Dragon were designed by Dragon Ball creator Akira Toriyama.

Shu — The main protagonist in the Blue Dragon universe. He has a brash and impetuous nature that has often gotten him into trouble. But his courage, strength and dogged determination has saved him from certain death many times. He is also protective and caring of his friends. Shu is the owner of the shadow Blue Dragon, which often uses magic sword attacks. In the anime, Blue Dragon doesn't cooperate with Shu at first until their fight with Ivanov and Gustav when Shu managed to gain enough power to control him. For most of the anime, Blue Dragon constantly criticizes everything Shu does. The Blue Dragon has a very violent personality, and is extremely cold, not caring about anything or anyone but himself, but does show concern when Shu is hurt.

Kluke — is a bit more mature and responsible than her age implies, Kluke's parents were tragically killed in the annual disaster that struck Talta Village, but her loss brought her closer to her friends, Shu and Jiro. Like her parents, who were doctors, she has a kind and caring nature, always willing to fight alongside her friends. Kluke is the owner of the Phoenix shadow. Kluke does not receive Phoenix until late into the story and therefore stays out of combat early on. Phoenix has a kind motherly side to her that teaches Kluke how to protect her friends. Phoenix can also summon barriers, teleport, and breathe fire.

Jiro — He is the smart one of the group. Both of his parents and his sister are dead. His village was burnt down when he was younger and he ran into Zola, where he learnt to summon his Shadow. Jiro has a hard time controlling his emotions in contrast to the game counterpart of himself. He's usually cold against the others, and the only one he seems to like is Zola. Jiro is the owner of the shadow Minotaur. Minotaur is always chiding Jiro for overusing his energy in battle but generally takes a calm approach to opponents.

Zola — Considered a Knight Master for her senses and expert sword skills, she was looking for descendants of the Seven Soldiers before meeting with Shu. Zola lost her father in accident researching ruins with him and Nene. She was the only survivor besides Nene and in sadness and despair she gave into the darkness, and the creature sealed within the ruins, Killer Bat. In the end, she turns evil because of Killer Bat and her "good-side" was chased out of her because of Killer Bat's power. Her shadow, the gargoyle like Killer Bat, is the only Shadow of the party who is armed with a weapon (a sword). Killer Bat possesses the power to purge the host of the goodness in their hearts. It is implied that he was the leader of all of the darkness, and that even he with all of his power was also afraid of Blue Dragon's power and thus saw him as his biggest threat.

Bouquet — She has an overall fan-service appearance, in that her breasts are very large. This is censored in the dub, with smaller breasts, instead of the actual breast size in the original version. Being a member of the Ra Clan, Bouquet has the ability to become invisible, but must strip in order to be completely unseen, which is edited out in the dub where she is depicted as being able to turn invisible whenever she wants. On one occasion, she was somehow detected by Delphinium and later by Investiture beings. Her shadow Hippopotamus may be weak and somewhat cowardly, but he has the ability to shapeshift sometimes using that ability by wrapping around Bouquet to provide her with a disguise. He also worries for Bouquet's well-being whenever a battle begins. Hippopotamus later gains the ability to copy the attacks that he is hit by.

Marumaro — A member of the Devee Tribe (a race of yellow humanoid creatures that wear pots for hats). Marumaro is obsessed with girls (he also acts like a pervert, and his actions often end up angering Kluke and Bouquet). He joins up with Shu and Co. after the village he was staying at was destroyed and its inhabitants were captured by twin Shadow users Ivanov and Gustuv. He owns the shadow Saber Tiger. Saber Tiger thinks of himself as a defender of justice and encourages Marumaro to feel the same way. 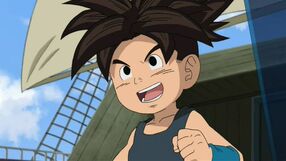 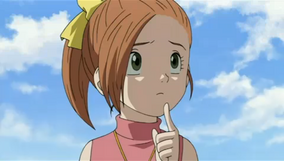 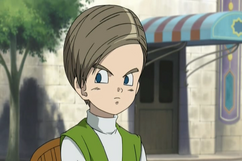 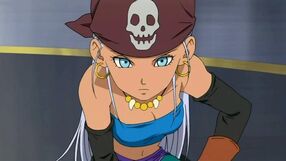 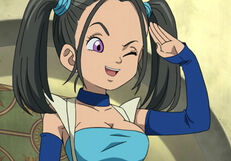 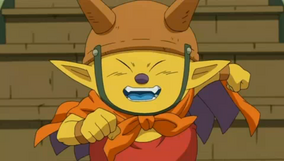 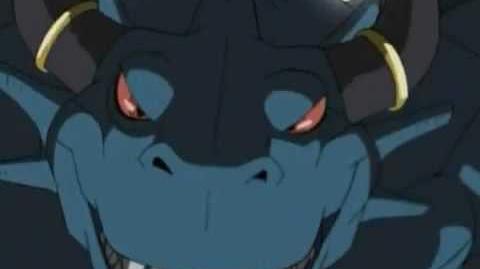 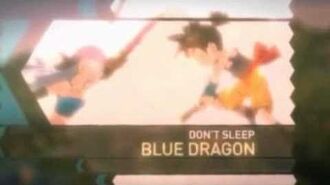 Viz Media also made an uncut version of the series but never released it in North America. However, on July 22, 2011, Viz Media started streaming Blue Dragon uncut subbed episodes on VizAnime/Hulu. Viz Media stated at Otakon 2011 that if the streaming numbers were good, they might release the uncut DVDs in North America. An uncut version of the series was released by Manga Entertainment, exclusively in the UK. These uncut episodes, unlike the North American DVD releases, fully restores the original Japanese opening and closing, all edited scenes from the Cartoon Network version are restored including the original music, as well as having the option to view the series in Japanese with English subtitles.

The series aired in the United States on Cartoon Network's Toonami block from March 29, 2008 to May 2008. After its Toonami run, the series moved to an early Saturday morning time slot.[5] After being removed from Cartoon Network the series became a Toonami Jetstream exclusive until it ceased functions in 2009.