Castle in the Sky

Castle in the Sky

In the late 1980s, an English version of Laputa was briefly shown in the United States by Streamline Pictures. This dub, produced for showing on international flights to Japan, was created by Magnum Video Tape Dubbing and commissioned by Tokuma Shoten. Streamline licensed Laputa from Shoten in late 1988 or early 1989, and was sent a print from Japan that had already been dubbed into English for use as an in-flight film by Japan Air Lines on its trans-Pacific flights. Reportedly, Carl Macek was disappointed with this early dub, which is available only on the Japanese DVD release.

The Disney-produced English dub was recorded in 1998 and planned for release on video in 1999, but Disney eventually decided to release it to theaters instead. After Princess Mononoke flopped financially in the United States, Laputa's release date was pushed back yet again. The film was finally released on DVD and video in the U.S. on August 16, 2005, alongside Kiki's Delivery Service and Spirited Away. As with Mononoke and Kiki, critical opinion was mixed about the new dub, but Cloris Leachman and Mark Hamill's performances as Dola and Muska drew praise. Laputa was the second-best selling DVD from Studio Ghibli distributed by Disney in the year of its release. Laputa was reissued on American home video in March 2010 as a tribute accompanying the home video release of Ponyo. The film was released on Blu-ray in North America on May 22, 2012, alongside Whisper of the Heart and The Secret World of Arrietty.

In the film's backstory, human civilizations built flying cities that were later destroyed by an unspecified catastrophe caused by people who became too proud of their power. This forced the survivors to live on the ground while the sole exception, Laputa, remains in the sky, concealed within a powerful thunderstorm. In the story's opening, an airship carrying a girl named Sheeta and her abductor Muska is attacked by the air-pirate Dola and her sons in search of Sheeta's crystal amulet. In the resulting struggle, Sheeta falls from the airship, only to be slowed by the amulet mid-fall. On the ground, she is received by a youth named Pazu, whose father had earlier been in search of Laputa. The next day they are pursued by Dola's pirates, and later by Muska's soldiers. Eventually, the two fall into a nearly-exhausted mine. There, they encounter the local eccentric Uncle Pomme, who informs them that Sheeta's amulet is one of the 'volucite' crystals ('Aetherium' in the American release) formerly used to keep Laputa aloft.

Upon leaving the mines, Sheeta says that her real name is Lusheeta Toel Ul Laputa; whereupon they are captured by Muska. Later, Muska shows Sheeta a dormant Laputan robot and reveals his knowledge of her secret name, which he interprets as that of a Laputan royal line, and threatens Pazu, whom she therefore orders home. Disappointed in her, Pazu returns to his own house, where he is seized by Dola's sons. Sheeta, retained by Muska, recites an apotropaic verse and unexpectedly activates the robot, who begins to destroy Muska's fortress to find her, while Pazu and Dola's pirates embark in winged 'flaptors' to rescue her themselves. Meanwhile the robot seizes Sheeta; but when struck by Muska's artillery, retaliates against the fortress, until Sheeta orders it to desist, losing her amulet in the meantime. The robot is then overcome by the airship Goliath; and Pazu rescues Sheeta, while Muska retrieves the amulet. The pirates, accompanied by Pazu and Sheeta, return to their airship Tiger Moth, where Dola assigns Sheeta to the galley and Pazu to assist her engineer, and in which they pursue the direction identified by Sheeta's amulet as that of Laputa, while Muska follows the same in the Goliath. Both airships arrive at Laputa on the following day, where the two children, separated from Dola's pirates, discover a city devoid of human life, but possessed of a parklike woodland maintained by a robot resembling that of the fortress, while Muska's soldiers plunder the city's treasures, holding Dola's pirates captive. Upon gaining entrance to the city's central sphere, Muska captures Sheeta; whereupon Pazu frees Dola's pirates and pursues Muska.

In the center of Laputa, containing the immense 'volucite' crystal keeping the city aloft, Muska identifies himself as one of the "Romuska Palo Ul Laputa", another royal line, and uses Laputan technology to destroy the soldiers accompanying him; whereupon Sheeta seizes her crystal amulet and flees, prompting him to pursue her. Encountering Pazu through a gap in an internal wall, Sheeta gives him her amulet, and is herself later cornered by Muska in Laputa's abandoned throne room. Arguing with Muska, Sheeta says that their ancestors, the old Laputans, left Laputa to live on earth because mankind's insatiable hunger for Laputa's power has caused much turmoil and led to a place without love. Sheeta and Pazu then read out the "Spell of Destruction', blinding Muska and destroying much of the city. Having escaped the collapse, Pazu and Sheeta re-unite with Dola's pirates, and later part from them, whereupon the ending credits show the remains of Laputa, maintained by the roots of an immense tree, in orbit above the earth. 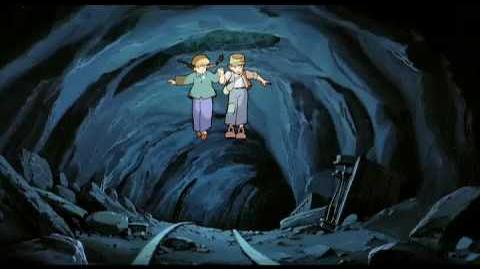