2:00 AM
Children Who Chase Lost Voices is a 2011 Japanese anime film created and directed by Makoto Shinkai. It is described as a "lively" animated film with adventure, action, and romance centered on a cheerful and spirited girl on a journey to say "farewell." The film was released in Japan on May 7, 2011 and was subsequently released on DVD and Blu-ray in Japan on November 25, 2011.

The film has been licensed by Sentai Filmworks in North America and was released on DVD and Blu-ray in November 2012.

Asuna is a young girl who has been forced to grow up quickly due to the death of her father, while her mother, a nurse, works long shifts at a hospital. Asuna spends her solitary days listening to the mysterious music emanating from the cat's-whisker receiver her father gave to her as a memento, accompanied by Mimi, her little cat with strange red markings.

One day, while walking to her clubhouse across a bridge, she is attacked by a fearsome creature and saved by a mysterious boy who calls himself Shun. Asuna treats Shun's wound from fighting the creature and later they both listen to Asuna's radio. Shun tells Asuna he is from another country called Agartha and that he came to this place to find something. He then gives Asuna a blessing in the form of a kiss to the forehead. Asuna leaves hurriedly and tells Shun she'll be back tomorrow. Shun, now alone, looks up at the stars and falls from the ledge to his death.

The next morning, Asuna hears from her mother that a boy was found dead in the river, but refuses to believe it's Shun. In school, Mr. Morisaki, a substitute teacher, is giving a lecture on a book which grabs Asuna's attention when he mentions Agartha, the land of the dead. After school, she visits Morisaki and asks him about Agartha. Morisaki explains that long ago when humankind was young, it needed the guidance of Quetzalcoatls, keepers of the dead, until humans matured and no longer needed them. They went underground along with a few humans who joined them.

Afterwards, Asuna goes to her hideout to find another mysterious boy who looks like Shun standing on the ledge. Just then, a group of armed men called the Arch Angels, appear and attack both of them. The mysterious boy hides in the underground entrance with Asuna, and the two proceed further into the cave when the cave's entrance is bombed. The two meet a Quetzacoatl who had apparently lost its physical senses and attacked the boy. He refuses to kill the gatekeeper, giving Asuna his clavis, a crystal, and fights back. The Arch Angels interfered, annihilating the gate keeper and the Arch Angel commander captures Asuna and uses the clavis to open a gateway to Agartha. The commander and Asuna enter the gateway followed by the boy. Once inside the commander reveals himself to be Morisaki and the boy also reveals himself to be Shin, Shun's younger brother. Morisaki tells him that all he wants is to bring back his late wife from the dead. Shin leaves Asuna and Morisaki.

Morisaki tells Asuna that she can go back but she decides to accompany him. They both go into the realm via an underwater entrance. Once inside, they go on a journey, along with Mimi who had snuck inside Asuna's backpack, to the Gate of Life and Death which can bring the souls of people back from the dead.

Upon arriving in his village, Shin is told that he has failed in his mission to retrieve that clavis, because Asuna has unknowingly returned with a fragment of one. Shin re-embarks to stop Asuna and Morisaki from wreaking havoc in Agartha.

Along the way, Asuna is kidnapped by a race of monsters called the Izoku. She awakens in an closed area and meets a young girl named Manna; they both try to escape but are not able to. The day begins to darken and the Izoku begin to appear amongst the shadows, but they can only move in the shadows. In their escape attempt, they encounter Shin who helps them but is wounded by an Izoku during the escape. Morisaki finds Asuna and Manna down the river as well as Shin with the help of Mimi. Shin tries to retrieve the clavis crystal that belongs to Asuna. However, he is too weak to put up a fight and Morisaki easily defeats him. Asuna convinces Morisaki to take him with them while Manna leads them to her village.

Once there, the villagers are, at first reluctant to help the "top-dwellers" but the village elder convinced the guards to let them in. The elder allows them to stay one night at the village because they had brought Manna back but they cannot stay more than that due to past history in that top-dwellers bring bad luck to Agartha. Meanwhile, Asuna checks up on Shin but he yells at her to leave him alone.

The next morning, Asuna and Morisaki depart from Amaurot by boat, but Mimi could no longer accompany them. Shin wakes up later and finds that Mimi had passed; Shin, Manna, and the elder proceeds to offer Mimi's corpse to the Quetzacoatl. When Shin sees the villagers riding away to kill them, he decides to follow in order to protect Asuna. Morisaki and Asuna are walking towards a steep cliff when they are attacked by the villagers but they are saved by Shin. Asuna, being too scared to climb down, stays while Morisaki continues on, after trading his gun for her clavis shard and telling her to go above.

Meanwhile, Shin is fighting the villagers and is about to be killed when the villagers sense that the clavis crystal has reached the Gate of Life and Death. They leave Shin to wander aimlessly, having betrayed his country.

Asuna, following Morisaki's instructions to stay in the water during nighttime because of the Izoku, walks aimlessly and asks herself why she came to Agartha; she finally accepts that she came to Agartha because she was feeling lonely. She is then attacked by the Izoku but is saved by Shin again. The two return to the cliff after seeing the Ark of Life descending. They encounter a Quetzalcoatl who is about to die. Before he dies, the Quetzalcoatl sings its' songs to preserve its memories; Asuna connected that the last song she heard in her world was Shun's song before he was to die. The Quetzacoatl offers to take them to the bottom of the cliff.

At the bottom of the cliff, they both find the Gate of Life and Death and enter it. Morisaki has already made a wish for his late wife to return, however, she requires a vessel. Asuna and Shin find Morisaki who tells Asuna she shouldn't have come and she is soon possessed by Lisa, Morisaki's late wife. Including taking over Asuna's physical body, Morisaki also paid with the loss of his sight. Believing the only way to undo Morisaki's wish was through the clavis, Shin destroys the crystal despite Morisaki having a knife to his throat. Breaking the clavis brings Asuna's soul, seen having a small reunion with Mimi and Shun, back to her body. Before Lisa leaves Asuna's body, she tells Morisaki to find happiness without her. Asuna is now back to her normal self but Morisaki is devastated and asks Shin to kill him. Shin tells him that carrying the burden of a deceased love one is humanity's curse and tells Morisaki to live on. Asuna heads back to the surface, making her farewell to Shin and Morisaki, who chose to stay behind. The film ends with Asuna, looking out her window at the cliff side where she met Shun and Shin. She then says her goodbyes to her mother as she hurries to her graduation ceremony as an older teen. 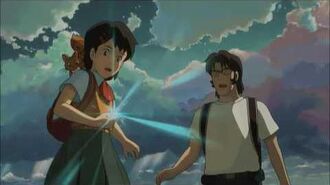