This was Toonami's first non-canonical T.I.E., meaning it features the Toonami characters (i.e. TOM and SARA) but does not impact the ongoing Toonami narrative or the characters themselves.[1][2] The event is directed by Toshiyuki Tsuru and animated by Telecom.[3][4] All dialogue in the T.I.E. is spoken in Japanese with English subtitles, similar to the April Fools 2018 broadcast.

With the Absolution under attack from an unknown enemy, TOM is force ejected by SARA in an escape pod. During the countdown to warp, TOM's pod is damaged by the enemy. His hyperspace jump is successful but only lasts a few seconds before the pod makes an emergency warp out of hyperspace and explodes. A broken TOM is then seen floating in space before fading from consciousness. However, TOM is awakened by a group that calls themselves the Cosmo Samurai, aboard their ship the Cosmo. The Cosmo Samurai are a vigilante group that keep the system safe from space pirates and other extraterrestrial threats. The members include: Tsuruhime, a girl descended from a shogun that wields a samurai sword; Awaji, a ninja; Yasuke, a warrior that wields a spear; and Hakase, A cat hooked up to a floating pod that possesses the third most genius intellect in the universe.

In a flashback TOM explains to the crew of the Cosmo how he ended up with them. The Absolution is attacked by an unknown force of space bandits. TOM attempts to defend the Absolution from the robot attackers but is quickly swarmed and defeated, leaving him heavily damaged, while SARA can only watch in horror. Back in the present, aboard the Cosmo, Tsuruhime deduces that the force which attacked the Absolution was their mortal enemy the space pirate crew Akutou. Tsuruhime asks TOM to become their ally in order to take them down, and he swiftly agrees. Hakase then explains to TOM that he is already in the process of building him a more battle ready body.

The Cosmo Samurai board the Akutou mothership. As the team progresses through the mothership towards the central command center, they easily destroy the swarms of enemy robots they encounter. Tsuruhime uses her katana, Awaji uses his shuriken and a fire Jutsu, Yasuke uses his spear and machine gun, and the newly upgraded TOM uses his blasters and lasers. Upon reaching the central command center, the Cosmo Samurai confront the Mid Boss of the Akutou who reveals he has captured SARA. TOM vows to save SARA and the Mid Boss mocks them before Tsuruhime charges at him to attack, only to be deflected by a barrier. Awaji then tries to get through the barrier with a fire Jutsu, but is also unable to get through. Hakase scans the barrier and realizes that it protects Akutou from all angles of attack. The Mid Boss then activates the ship’s weapons system, but Awaji uses an earth Jutsu to summon a barrier that the team ducks behind. The Mid Boss then summons a vast number of robots that quickly approach the Cosmo Samurai from behind.

With their backs against a wall, the Cosmo Samurai struggle to defend themselves from the onslaught of robots. As the weapons system of the mothership slowly destroys their barrier, Hakase manages to successfully hack into the ship and uses the weapons system to destroy the remaining robots. He's also able to deactivate the Mid Boss' barrier leaving him vulnerable. The Mid Boss tosses SARA away out of rage, with TOM catching and releasing her, before Tsuruhime and the Mid Boss square off. The Mid Boss rips off his own tail to use as a weapon and attacks Tsuruhime, but she manages to slice his tail in half before killing him with her sword, avenging her father’s death.

While the team regroups, a drone activates off of Mid Boss' body and fires at the team. Awaji quickly protects Tsuruhime from the blast as it hits him in the back. TOM attacks the drone with his blasters, while Hakase tries to hack the drone but is unable to, causing him to realize that someone else has taken external control. TOM activates his new targeting system and manages to blast the drone before Yasuke destroys it with his spear. The team then gathers around Awaji, who dies from his injuries. However, Awaji quickly reveals himself to be alive as they find him hanging from the ceiling, while the dead Awaji is revealed to be a clone.

Suddenly, the ship’s computer activates and a shadowy figure appears on screen and expresses his disappointment at failing to kill one of them. He then reveals that he watched the entire battle and mocks them. Tsuruhime demands to know who he is and the shadowy figure reveals himself as the "real" Boss of the Akutou and that the Mid Boss was merely a pawn in his syndicate. TOM then makes a declaration that they’re coming for him next. 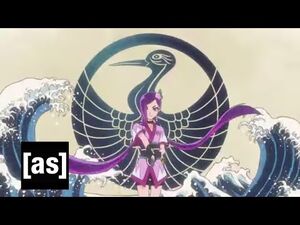 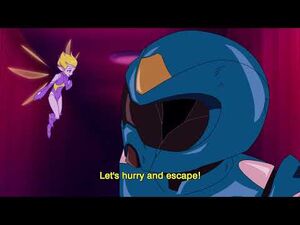 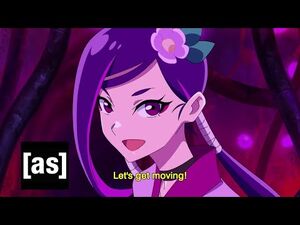 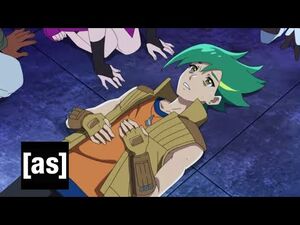 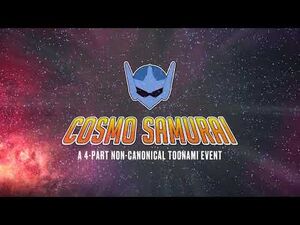 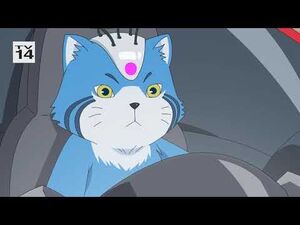 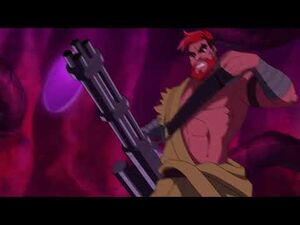 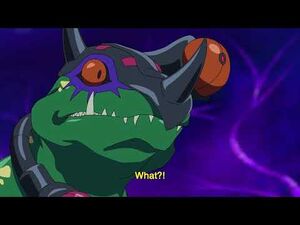