September 9, 2017[6] - October 13, 2018
Cowboy Bebop is a 1998 Japanese anime series developed by Sunrise. It featured a production team led by director Shinichiro Watanabe, screenwriter Keiko Nobumoto, character designer Toshihiro Kawamoto, mechanical designer Kimitoshi Yamane, and composer Yoko Kanno. The twenty-six episodes ("sessions") of the series comprise a complete storyline set in the year 2071. It follows the adventures, misadventures, and tragedies of a bounty hunter ("cowboy") crew travelling on the Bebop, their starship. The series is rated TV-14 LV on Adult Swim.

In December 2012, Anime Limited announced via Facebook and Twitter that they had acquired the home video license for the United Kingdom. Part 1 of the Blu-Ray collection will be released on July 29, 2013, while Part 2 and the standard DVD Complete Collection was released on September 23, 2013. In North America the series was acquired by FUNimation who announced that they plan to release the series on Blu-Ray and DVD on December 16, 2014.

On September 2, 2001, Cowboy Bebop became the first anime title to be broadcast on Adult Swim in the United States. Since then, the series has aired continuously in rotation due to its success.

The 26-episode series revolves around the often violent adventures undertaken by the arguably mismatched crew of the BeBop spaceship. The crew is made up of four unique characters: Jet Black, a former ISSP police officer who retired following a mob hit that cost him his arm, Spike Spiegel, a laid-back exiled hitman of the ruthless Red Dragons' Syndicate, Faye Valentine, a beautiful amnesiac con artist who awakened into the future world after a lengthy period of cryogenic hibernation, and Radical Edward, a hyperactive and barefooted preteen girl with a reputation as a prolific computer hacker. They are also accompanied by Ein, a hyper-intelligent, genetically-engineered stray Corgi.

By a strange twist of their respective fates, this foursome ends up partnering together, using their unique talents to become a ragtag team of bounty hunters, although their fortunes as such are at best mixed.

Throughout the series, Bebop crew members' deal with unresolved issues from their pasts, and the show regularly utilizes flashbacks to illustrate the history of the main characters. The day-to-day life of the crew is also explored throughout the series. The series is set in the year 2071, when the entire Solar System has been made accessible through reliable hyperspace gates. In 2022, an explosion of an experimental hyperspace gateway severely damaged the Moon, resulting in a debris ring and meteor bombardments that eradicated a large portion of the Earth's population. As a result, many survivors abandoned the barely habitable Earth to colonize the inner planets, the asteroid belt, and the Moons of Jupiter.

Mars has become the new central hub of human civilization, and interplanetary crime syndicates exert influence over the government and the Inter-Solar System Police (ISSP), limiting their effectiveness in dealing with crime. As a result, a bounty system similar to that in the Old West is established to deal with fugitives, terrorists, and other criminals; the bounty hunters involved are frequently termed "cowboys".The standard currency is the woolong, which is roughly equivalent to the present-day Japanese yen.

The technology in Cowboy Bebop's world is a mixture of the futuristic (cybernetics, jump gates, energy weapons) and the modern (cars, handguns, zippo-styled lighters), both of which are blended together. Yet, even "new" technology often looks a bit older and battered.

The three main classes of vehicles are ground vehicles, air vehicles, and space vehicles. Ground vehicles are the most mundane of the three, being wheeled automobiles not much different from modern automobiles. Aircraft are mostly jet-powered, although helicopters are not uncommon. Spaceships range in size from small one-man "fighters" to immense passenger liners and cargo ships.

Spike Spiegel — the main protagonist of Cowboy Bebop, Spike is a former member of the Red Dragon Crime Syndicate. Spike is a master in firearms and hand-to-hand combat, practicing Jeet Kune Do, and is also a skilled pilot. He flies a red customized Mono Racer, an atmosphere-capable spacecraft called Swordfish II. His right eye is cybernetic. He is haunted by the memory of his time in the syndicate, and particularly by his romantic relationship with a mysterious woman named Julia, and his conflict with arch-rival and former syndicate partner, Vicious. He is also a skilled pickpocket.

Jet Black — is a former ISSP (Inter-Solar System Police) detective and is the owner of the Bebop. Once called "The Black Dog" by his fellow officers, he left the ISSP in disgust due to its corruption and red tape, and turned to bounty hunting as a way to apply justice. Although medical science could replace his lost arm, he voluntarily wears a cybernetic prosthetic as a reminder of the consequences of rushing into danger. He also owns a small yellow utility ship called Hammerhead. The Hammerhead has been equipped with a mechanical claw, and a harpoon that can be used as a tow cable. Like Spike, he too is haunted by the memory of a woman, Alisa, his longtime girlfriend who left him without reason.

Faye Valentine — is a novice bounty hunter with a gambling addiction. She joins the crew of the Bebop uninvited, to the consternation of Jet and Spike. Though she abandons the ship several times during the course of the series, her attachment to the crew always brings her back. These feelings are apparently reciprocated, as Jet and Spike always allow her to return despite claiming they're pleased to see her leave. She pilots a generic heavy spacecraft called Red Tail which is pale blue despite the name and has been heavily modified with armament and tracking sensors. Her gambling, cheating, and competitive skills are unrivaled except by Spike. Much of her past and her real last name are a mystery, however it appears that she was severely injured in a space shuttle accident and was then cryogenically frozen until she could be healed. This expensive medical procedure left her deeply in debt, made worse when she inherited the debts of her husband (a man who married her shortly after her surgery, then later faked his death in an automobile accident). She emerges from the cryonic sleep in an amnesiac state, from which she eventually recovers. All vestiges of her past — home, family, possessions — are gone.

Edward (Ed) — is a young computer genius and master hacker. She uses the alias Radical Edward when hacking. Ed is a girl, though her name and androgynous appearance suggest otherwise. She had followed the travels of the Bebop before encountering the ship, and agrees to help the crew track down a bounty-head in exchange for becoming a member of the crew. Although extremely intelligent, Ed is still a child, and looks up to the crew of the Bebop as members of her family. She uses the fanciful name Edward Wong Hau Pepelu Tivruski IV, but an odd encounter with her father reveals that her real name is Françoise Appledelhi. She spends much of her time with Ein.

Ein — a former lab animal identified as a "data dog" by the scientists who reared him. The scientists used him for unspecified experiments, enhancing him to give him extraordinary data-sniffing and pattern-recognition abilities. It is suggested that he possesses enhanced intelligence, which he subtly displays throughout the series, including showing the ability to speak to other animals (and possibly Ed), and perfectly hacking the Scratch website in session #23. The rest of the Bebop crew, with the exception of Ed, often fail to notice these qualities and treat Ein as an average pet.

Vicious — is a grim enforcer of the Red Dragon Crime Syndicate, a former ally of Spike within the syndicate and now his nemesis. Vicious wields a katana for a weapon and is always accompanied by a strange, crow-like bird perched on his shoulder. He lives up to his name both through his violent actions and his treacherous scheming within the syndicate. Vicious is the series' only recurring antagonist, appearing in five episodes. 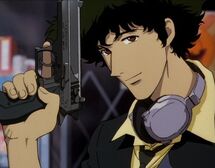 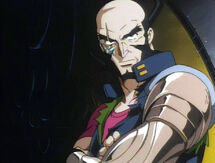 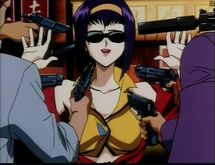 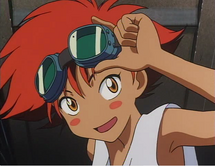 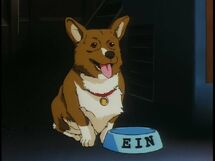 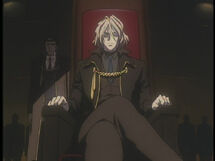 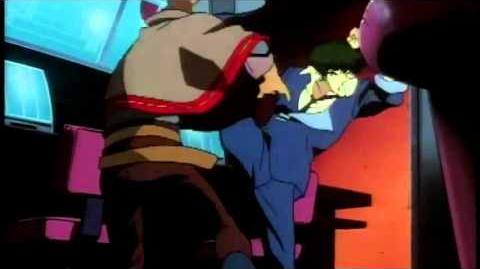 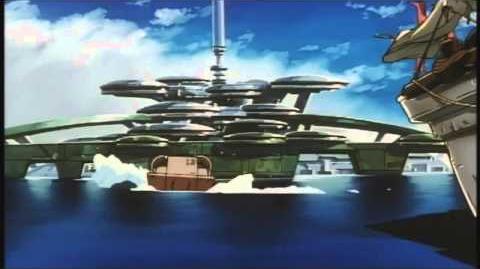 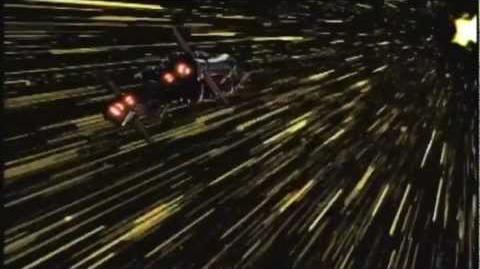 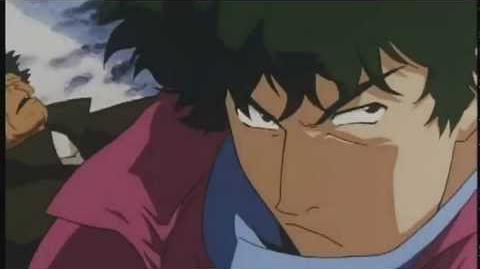 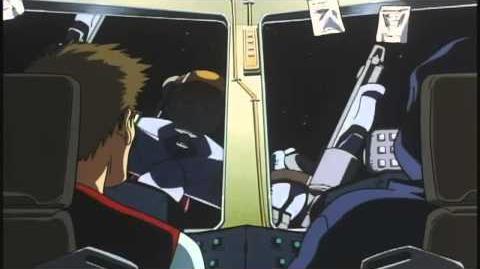 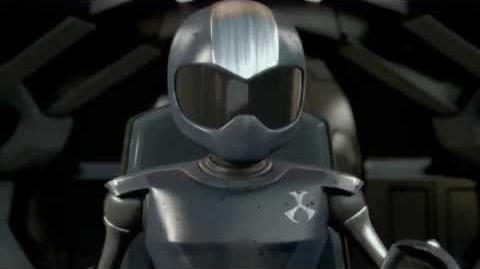 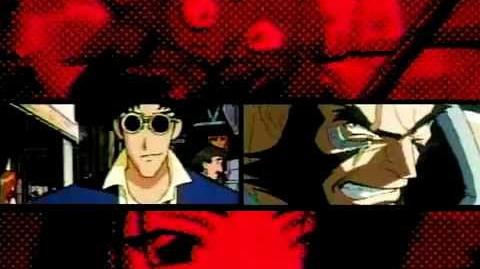 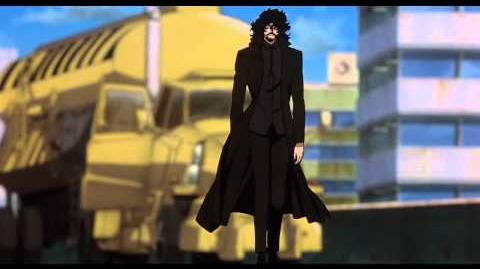 Cowboy Bebop is a 26 episode anime series developed by Sunrise. Most episodes ("sessions") are named after a musical concept of some sort, usually either a broad genre (i.e. "Jupiter Jazz") or a specific song (i.e. "Honky Tonk Women"). "Cowboy Bebop Session XX" is a special clip show that was created as the final episode, when the show was briefly canceled because of violence in Japanese schools after 13 episodes had aired. A movie was released in 2001, titled Cowboy Bebop: The Movie. It serves as a midquel taking place between episodes 22 and 23 of the anime series.

Cowboy Bebop was originally released on DVD by Bandai Entertainment, but said release has gone out of print since Bandai halted DVD production. The series was released in three separate editions in North America. The first release was sold in 2000 individually, and featured uncut versions of the original 26 episodes. In 2001, these DVDs were collected in the special edition Perfect Sessions which included the first 6 DVDs, the first Cowboy Bebop soundtrack, and a collector's box. At the time of release, the art box from the Perfect Sessions was made available for purchase on The Right Stuff International as a solo item for collectors who already owned the series.

The second release, The Best Sessions, was sold in 2002 and featured what Bandai considered to be the best 6 episodes of the series remastered in Dolby Digital 5.1 and DTS surround sound.

The rights to Cowboy Bebop now belong to FUNimation Entertainment whom released the entire series on DVD and Blu Ray in December 2014.

In the United States, the English dub of the series premiered on Cartoon Network's brand new Adult Swim programming block on September 2, 2001, making it the first anime series to air on the block. Unfortunately, after the terrorist attacks on September 11th, the series was put on hiatus and was replaced with reruns of ToonHeads and The Bob Clampett Show.[8] The series returned to Adult Swim on September 23, 2001 but skipped episodes 6 and 8, due to the content of the episodes being similar to the recent catastrophe. (episode 22 was also later skipped)[9] After the initial run was completed, the series was rerun and two of the previously skipped episodes (6 and 8) were aired for the first time. Episode 22 was accidentally skipped for a second time but was aired the following week.[10] The series has aired on Adult Swim consistently since its premiere in 2001.

The following is a list of Toonami marathons in which at least one episode of Cowboy Bebop appeared.