40 (List of Episodes)
D.I.C.E. (DNA Integrated Cybernetic Enterprises) is an animated television series produced by Bandai Entertainment, Xebec, and Studio Galapagos (computer animation), with the English dub provided by Blue Water Studios. Originally created for the United States, the first episode of the series was released online, on toonami.com, before it aired on television.[4] On December 6, 2005, the Japanese version premiered on Animax under the title Dinobreaker.[5]

In Sarbylion galaxy, there is an organization named DICE (DNA Integrated Cybernetic Enterprises) to help those in need. Among them, F-99 is the only unit composed entirely of children. Often being trivialized by their young ages, DICE member use RADOC to summon the Gild suit (Gild jacket) to help them to gain some respect among suspicious locals. When a problem arises, DICE is called to the rescue. With the Dinobreaker, which can transform from Vehicle Mode to Dino Mode, the DICE team can always get the job done. D.I.C.E. is sometimes compared with Thunderbirds, not only because of the rescue theme, but also the GTR catchphrase, which means "Good to Roll". (Some prefer it as 'got the request')

Jet Siegel — A hot-headed pilot who always rushes into danger with little or no forethought. Despite his hot temper, Jet has a strong moral sense and isn't afraid to take risks to rescue those in need. His fierce competitive streak often leads to friction with his teammates. Jet's Dinobreaker is Motoraptor, it's dinosaur form is a Velociraptor.(Age: 12)(Red)

Tak Carter — Captain of F-99. As the second oldest member of the team, he is looked upon by his other teammates as an older brother. A well-respected and capable leader, Tak always stays calm and decisive even under enormous pressure. In episode 8, it was hinted that he and Marsha are dating. Tak's Dinobreaker is Dimetrover, it's dinosaur form is a Dimetrodon.(Age: 15)(Yellow)

Robert Clapice — Described best as "a pretty-boy pilot who is always concerned about his looks." As the pilot of the only flight-capable Dinobreaker, Robert is often sent to the frontlines to scout the situation. Though Robert and Jet always compete over everything, they also make the best partners on the DICE F-99 team. It is shown often throughout the season that he is close friends with both Sam and Marco. Robert's Dinobreaker is Hoverptera, it's dinosaur form is a Pteranodon.(Age: 12)(Purple)

Marco Rocca — Jet's buddy in the orphanage and a close friend of Robert. Always complaining about something, especially how cramped his cockpit is, Marco and his Dinobreaker are often assigned to heavy-duty tasks such as demolitions and heavy lifting. Despite his constant gripes, Marco always gets the job done. He can be relied on to solve tough situations and often remains calm and in control in bad situations. Marco's Dinobreaker is Monocrawler, it's dinosaur form is a Monoclonius.(Age: 12)(Blue)

Puffy Angel — Holds the position of data analysis expert on board F-99. She sees Marsha as an older sister figure and happens to be a bit of a shop-a-holic. She is sometimes temperamental and hates Jet to the core, however in the last episode of Season 2, when Jet was commissioned in the hospital after the final battle with the Immortal Pharaoh, she watched over and cared for him every day until he recovered, hinting that she has deeper feelings for him. Puffy can also guild up but does not have a dinobreaker. (Age: 12)(Pink)

Sam N'Dool — A mechanical expert and another close friend of Robert. Though the youngest of the team,he is also referred to the brains of bunch. Sam drives the Dinobreaker Paratricar, it's dinosaur form is a Parasaurolophus, capable of turning invisible. He also prays in his free time and for the safety of his crew-mates(Age: 11)(Green)

Chao Lee — Both the pilot and navigator of F-99. He is the giver of advice to anyone who seems to be troubled or upset, and is willing to speak out against his captain if he has to. (Age: 17)(Brown)

Marsha Rizarov — Serves as second-in-command of DICE F-99. In episode 8, it was hinted that her and Tak are dating. Marsha can also guild up, but does not have a dinobreaker. She is seen by all of her teammates as an older sister. (Age: 14)(Teal) 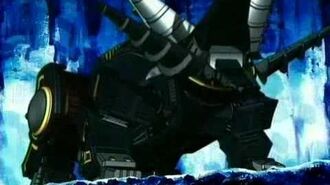 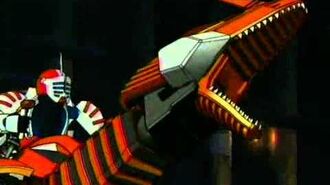 Bandai released both seasons of the series on DVD in 2005.

D.I.C.E premiered on Cartoon Network's Toonami block on January 22, 2005. The series was not recieved well by Toonami viewers and only 10 episodes aired on the block. Episodes 1 through 8 aired in order, but episodes 24[7] and 25[3] were the last two episodes aired on Toonami. The series was then moved out of the Toonami block to Cartoon Network's Saturday morning 6:00 AM time slot, to premiere all unaired episodes of season 1 remaining. Season 2 has never aired in the United States.