26 (List of Episodes)
Dai-Guard is a 26 episode Japanese anime series, produced and animated by XEBEC, and directed by Seiji Mizushima. The series premiered in Japan from October 5, 1999 to March 28, 2000 on TV Tokyo.

In the United States the English version of the series was licensed by ADV Films whom released the series on DVD. The series had a very brief run (two episodes) on Cartoon Network in 2003 through Toonami's "Giant Robot Week"[1] and also aired on The Anime Network.

The series is based around three office workers of the 21st Century Defense Security Corporation's Public Relations Division 2, who, with the company's giant robot, Dai-Guard, fight interdimensional alien beings called "Heterodynes". Unlike most giant robot anime, Dai-Guard performs on much more realistic physics, making it heavy, slow, and a hassle to control. Also, the Heterodynes seem to be the least of the 21st Century Corporation's problems as they experience opposition in the form of massive damage claims, lawsuits, rivals and a jealous and antagonistic military who wishes to take back Dai-Guard for themselves.

Dai-Guard — Dai-Guard stands 25 meters high, and weighs 156 tons. It is composed of multiple pieces, which were originally transported to the site of battle, and assembled on location. Initially, it was poorly maintained and essentially mothballed due to the absence of the Heterodyne threat. With their return, Dai-Guard is recommissioned and underwent several upgrades throughout the series. Due to its configuration, pilots are required to apply for a 'vertical-model special vehicle license,' which can take a minimum of 2 months to complete. It was stated that Akagi got a score of D minus, which barely made him eligible to be Dai-Guard's main pilot.

Shunsuke Akagi — The primary pilot of Dai-Guard. The headstrong, idealistic and impulsive, 25-year-old Akagi can be seen as the heart and brawn of the three Dai-Guard pilots. Beforehand, he was merely an office worker for the 21st Century Defense Security Corporation, but he manages to achieve his dreams of becoming a "Giant Robot pilot." During the return of the Heterodynes, he and his two friends Ibuki and Aoyama become the pilots of Dai-Guard, and intend to put it to use in order to fight off the Heterodyne threat. Akagi loves his job a little too much and manages to stick out among his fellow workers as the more enthusiastic one. Akagi always has the best intentions, even though they usually get him into trouble. Intriguingly, his distinctive personality makes him a natural as Dai-Guard's primary pilot and his cartoon-samurai ethical code quickly wins him a place in the hearts of the public. He refuses to take or allow actions that will endanger civilian lives and/or property if there is any alternative whatsoever.

Ibuki Momoi — Years ago, during the last Heterodyne attack, Ibuki's father (a scientist whose theories predicted the appearance of the Heterodynes) was killed in the attack. Ever since that incident, Ibuki wanted revenge against the Heterodynes. She becomes the navigator of Dai-Guard for this very reason. However, she learns the less than heroic truth about her father, and it leaves her without an emotional anchor. Ibuki has a rather strained relationship with her stepfather, who at first is against Ibuki piloting Dai-Guard, but becomes the person who helps her understand her father and fight her personal demons in time to save the world with much more clarity. As with Akagi, her personality meshes well with her position as Dai-Guard's navigator-she is so obsessed with details that she can make quick and precise summaries of a Heterodyne's abilities, often noticing subtle flaws in a given Heterodyne that allow the team to destroy it with minimal casualties.

Keiichiro Aoyama — Both a veritable ladies man and somewhat mysterious, Aoyama is the engineer of Dai-Guard. Most of the time, Aoyama disappears after work, often taking off early. While his friends believe he is off womanizing, it turns out that Aoyama is caring for his sick mother, who personally does not want to become Aoyama's top priority over piloting Dai-Guard. As his experiences grow during his time piloting Dai-Guard, he meets more people from his past that he once again crosses paths with. Like his fellow pilots, he possesses personality traits that assist him in his role as Dai-Guard's engineer. Aoyama is always looking for ways to save time and effort, so not only does he regulate the robot's systems with clockwork proficiency, but he will intuitively notice methods by which the team can accomplish its goal with less effort.

President Ookouchi — The president of 21st Century Defense Security. He was previously an army officer, and was the one responsible for ordering the use of O-E Weapons during the Heterodyne attack twelve years ago. Because of this, he is determined to avoid the use of these weapons again, and is thus very supportive of the Dai-Guard team. He was briefly voted out of office by the company's board of directors, but was reinstated when the company began to flounder without him.

Haruo Oosugi — The chief and supervisor of Public Relations Division 2. He has a very easy going personality, and is always supportive of his staff.

Shinyu Yokozawa — The aid to Chief Oosugi, who also helps oversee Dai-Guards' operations. He is married with a young daughter. As his daughter has a sickly constitution, he is often concerned with the safety of his family.

Noriko Ooyama — At 28, she is the oldest of the girls that work in the Public Relations Division 2 office, and is seen as an older sister figure to the other employees. Her hometown of Hiroshima helps inspire her to help people, on account of what happened to the city during the War. Among the girls employed by the division, she is the most responsible. She is often concerned about the well being of Akagi, and often nags him about his work and health.

Chiaki Nakahara — Despite being the second oldest of the office girls at 25, she is very shy, easily flustered, and the shortest member of Public Relations Division 2. However, she is very dependable at doing her job, being the head of accounting for the division. She has a slight crush on Aoyama.

Fuuka Tanigawa — Tanigawa is the most outgoing of the office girls, and has a hyperactive personality. She is somewhat of an office gossip, often repeating dubious information heard from other parts of the company.

Shizuku Irie — Notable for her calm demeanor, Shizuku most often speaks in a low, almost emotionless, tone. However, she occasionally, and randomly, acts out various other characters' behaviors and is known for her sarcastic remarks.

Tomoyoshi Ishizuka, Tomorou Taguchi, and Hirotaka Ijyuuin — This trio of salarymen have almost identical physical appearances and personalities; all three are overweight and easygoing. They are all 27 years old, and began working for the company at the same time. As a result, they work well together. Ishizuka is in charge of the office work, Taguchi is the events planner and coordinator, and Ijyuuin is in charge of domestic public relations.

Younei Sumida — The head of Dai-Guard's ground crew, who oversees the repair and maintenance of the robot. His crew is also responsible for the construction of Dai-Guard's new parts and weapons. He is often seen assisting Prof. Domeki, who he harbors feelings for.

Rika Domeki — An eccentric 17-year-old child genius, who is the head of the Technology Division, and the company's resident scientist. She insists that others refer to her as "Professor". She is an expert on the research of Heterodynes, and is also the one responsible for designing new parts for Dai-Guard. She often takes advantage of Sumida's willingness to help her.

Shirou Shirota — An army officer who is assigned as the Tactical Advisor to the Dai-Guard team. He is originally very strict with regulations, and insistent that civilians should not be allowed to handle the Heterodyne crisis. However, his interactions with the employees of Public Relations Division 2, especially Akagi, causes him to change his views. He eventually becomes one of their biggest supporters in the army, and often risks his own career to help them. 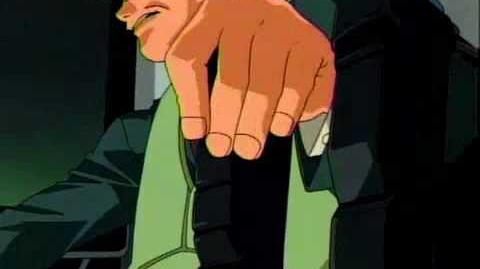