June 9, 2007[2] - July 14, 2007
Fantastic Four: World's Greatest Heroes is an animated television series based on the Marvel Comics' Fantastic Four comic book series and the 2005 movie. The series is the team's fourth foray into animation, and combines two-dimensional anime-style art and three-dimensional computer animation produced by the France-based animation company Moonscoop, and is also produced by Moonscoop division Taffy Entertainment. All in collaboration with Cartoon Network. It is distributed in the U.S. by 20th Century Fox and 20th Television, and in other countries by Warner Bros. Television Distribution.

In the United States, the show suffered an erratic airing schedule on Cartoon Network, having premiered as part of Toonami on September 2, 2006[1], but only ran for 7 of the season's 26 episodes before being pulled without explanation. It returned to the network starting June 9, 2007[2], shortly before the release of the film Fantastic Four: Rise of the Silver Surfer, but again, only 7 further episodes were aired, leaving 12 episodes unaired. The show also aired on Boomerang for a brief time before moving to the Nicktoons Network to air the final episodes. Episodes unaired in the U.S. began airing on the Nicktoons Network in the winter of 2009.

World's Greatest Heroes is not directly connected to any of the previous iterations of the Fantastic Four, telling its own version of the team's origin and meetings with their greatest villains. Additionally, Johnny Storm's sister is identified as Susan Storm, implying that, like the earliest versions of the story, she is not yet married to Reed Richards but is dating or engaged to him. The series begins with the FF as already-established adventurers, foregoing an actual "origin episode" for the group. When the series was released outside of America, it featured a modified opening sequence with new narration that verbally established the origin of the team, but which did not expand on the mysteries of the origin any further.

Mr. Fantastic/Reed Richards — The leader of the Fantastic Four, Reed possesses a mastery of mechanical, aerospace and electrical engineering, chemistry, all levels of physics, and human and alien biology. Reed Richards gained the power of elasticity from irradiation by cosmic rays. He has the ability to convert his entire body into a highly malleable state at will, allowing him to stretch, deform, and reform himself into virtually any shape. Reed Richards has been observed as being able to utilize his stretching form in a variety of offensive and defensive manners, such as compressing himself into a ball and ricocheting into enemies or flattening himself into a trampoline or a parachute to rescue a teammate. Reed is also able to shape his hands into hammer and mace style weapons, and concentrate his mass into his fist. All of these feats used to require extreme concentration; however, due to mental and physical training, he can now perform these feats at will. The most extreme demonstration of Reed's powers is when at one point he was able to increase his size and mass to Thing-like proportions which also increased his physical strength.

Invisible Woman/Susan Storm — Sue received her powers after being exposed to a cosmic storm. Her primary power deals with light waves, allowing her to render herself and others invisible. However, she can also project powerful fields of invisible psionic energy which she uses for a variety of offensive and defensive effects.

Human Torch/Johnny Storm — Like the rest of the Fantastic Four, the Human Torch gained his powers on a spacecraft bombarded by cosmic rays. He can engulf his entire body in flames, is able to fly, can absorb fire harmlessly into his own body, and can control and create fire by sheer force of will. "Flame on!", which the Torch customarily shouts when activating his full-body flame effect, has become his catchphrase. The youngest of the group, he is brash and impetuous in comparison to his beautiful and compassionate sister, Susan Storm, his sensible brother-in-law, Reed Richards, and the grumbling Ben Grimm.

The Thing/Ben Grimm — As a result of a mutagenic effect due to exposure to cosmic radiation, the Thing possesses high levels of superhuman strength, stamina, and resistance to physical injury. His strength has continued to increase over the years due to a combination of further mutation and special exercise equipment designed for him by Reed Richards. He is capable of surviving impacts of great strength and force without sustaining injury, as his body is covered with an orange, flexible, rock-like hide. He is also able to withstand gunfire from high caliber weapons as well as armor piercing rounds. It is possible to breach his exterior, however, and he does bleed as a result. The Thing's highly advanced musculature generates fewer fatigue toxins during physical activity, granting him superhuman levels of stamina. When in his Thing form, he has only three fingers and a thumb on each hand. The loss of one digit on each hand, and the increase in volume of the remainder, does not affect his manual dexterity. However, he has been shown doing things like holding a pencil and using it to dial a phone (from stories during the era when rotary-dial phones were common), or to push buttons on a keypad, to demonstrate how he adapts to using devices that would ordinarily be too small for him. His trademark orange rocky appearance, sense of humor, blue eyes, and his famous battle cry, "It's clobberin' time!", makes him a very recognizable comic book character. 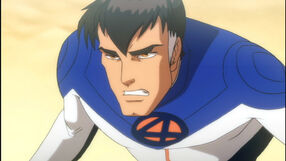 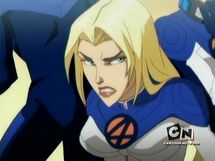 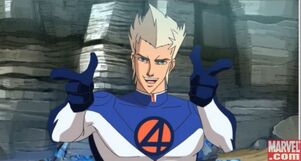 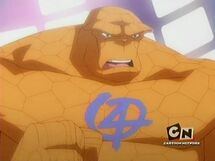 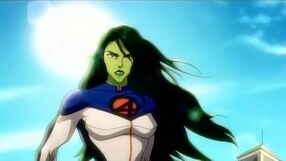 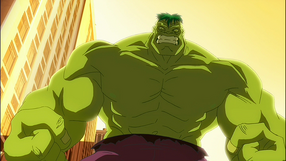 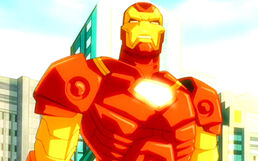 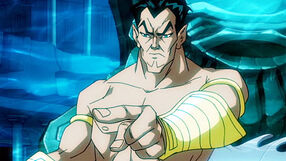 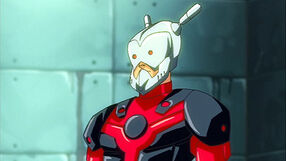 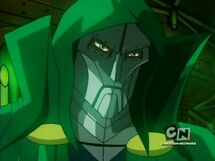 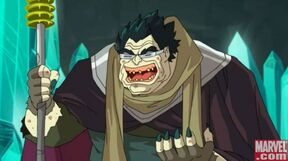 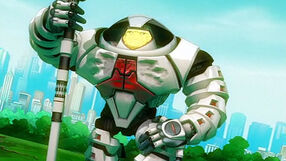 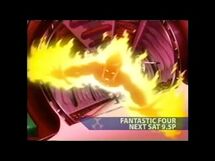 The episodes that aired on Cartoon Network were, for the most part, aired out of order. In its intended viewing order, the first half of the series forms a loose story arc that spans thirteen episodes, focusing on the mysteries of the Negative Zone and Doctor Doom's attempts to exploit its power, in addition to stories pitting the FF against the Mole Man, the Puppet Master and the Impossible Man, with guest-appearances by fellow Marvel Comics heroes Ant-Man and the Incredible Hulk. Significantly, the FF clash with Ronan the Accuser and the alien Skrulls in two separate episodes, whose stories converge in the opening episode of the season's second half.

The second half of the series is less cohesive, featuring only single-episode adventures with villains such as the Frightful Four and Diablo and guest-appearances from superheroes Iron Man, Namor and She-Hulk. The series climaxes in an world-endangering appearance from Terminus, used instead of the FF's more notable globe-threatener Galactus, who was off-limits to the creative team.

All episodes of Fantastic Four: World's Greatest Heroes have been released on DVD in the United States. The Complete First Season was released on June 10, 2008.

In the United States, the show suffered an erratic airing schedule on Cartoon Network, premiering on the network on September 2, 2006 and running for only 7 of the season's 26 episodes before being pulled. It returned to the network starting June 9, 2007, shortly before the release of the film Fantastic Four: Rise of the Silver Surfer, but again, only 7 further episodes were aired, leaving 12 episodes unaired in the United States. The show also aired on Boomerang for a brief time before moving to the Nicktoons Network in 2009 to air the final episodes.[3]

The series premiered on Toonami on September 2, 2006, running for only 7 of the season's 26 episodes before being pulled. It returned to the block starting June 9, 2007, but only 5 further episodes were aired on Toonami before the series was moved to a Saturday morning time slot outside of Toonami.