Fire Force is a Japanese anime series, based on the manga series written and illustrated by Atsushi Ōkubo. The anime adaptation is produced by David Production with Yuki Yase directing. The series premiered on July 5, 2019 at 1:25 AM (effectively July 6th) as part of the Super Animeism block on MBS and TBS. Due to the Kyoto Animation arson attack on July 18, 2019, Episode 3, which was originally scheduled to air on July 19, 2019, was postponed.[2] After the eleventh episode aired on September 20, 2019, the series went on another hiatus, with episode 12 scheduled to air on October 11, 2019.[3]

Funimation licensed the series in North America and created an English dub. This dub began simulcasting on FunimationNow the same day as the episode premiered in Japan.[4] Crunchyroll and AnimeLab also simulcast the series.[5] The series premiered on Adult Swim's Toonami block on July 27, 2019 at 12:00 AM.[1] On August 24th, the series moved to 12:30 AM. On February 1, 2020, the series will complete its run on Toonami.[6]

Terror has paralyzed the clockwork metropolis of Tokyo! Possessed by demons, people have begun to burst into flame, leading to the establishment of a special firefighting team: the Fire Force, ready to roll on a moment's notice to fight spontaneous combustion anywhere it might break out. The team is about to get a very unique addition: Shinra, a boy who possesses the unique power to run at the speed of a rocket, leaving behind the famous "devil's footprints" (and destroying his shoes in the process). Can the Fire Force discover the source of this strange phenomenon and put a stop to it? Or will the city burn to ashes first? 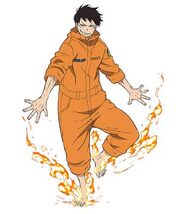 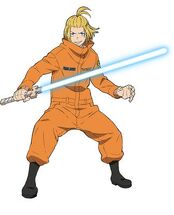 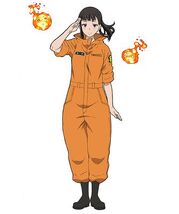 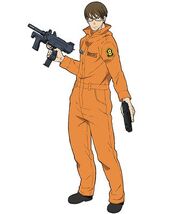 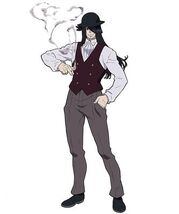 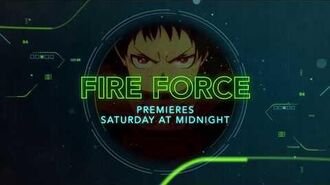