7:30 PM
G.I. Joe: Valor vs. Venom is a direct-to-video CGI animated movie and sequel to G.I. Joe: Spy Troops. It was released in 2004 by Reel FX Creative Studios and distributed by Paramount Pictures. Like Spy Troops, the film was written around the theme of the toys released that year. In this case, it was Valor vs. Venom which introduced a new villain group, Cobra’s V-Troops. the movie was released on September 14, 2004.

Reel FX produced two G.I. Joe CGI movies. Spy Troops was the first to be released, while G.I. Joe: Valor vs. Venom followed a year later. They were both sold direct-to-video, as well as offered by order through coupons enclosed with the action figures. These movies are distributed by Paramount Studios.

The second movie in the Reel FX series has Cobra kidnapping the G.I. Joe commander General Hawk for nefarious purposes. Doctor Mindbender has invented a method to transform humans, into feral man-beasts that heed Cobra’s bidding. Mindbender calls the process "Venomization", wherein human DNA is fused with animal DNA. Cobra Commander’s plan is to brainwash and mutate Hawk into becoming the Venomized troops’ leader. Additionally, the Joe Team is in possession of a magnetic cannon, capable of delivering a cargo almost anywhere in the world, which is exactly the tool Cobra requires to Venomize the human population.

As in G.I. Joe: Spy Troops, elements from the comic series published by Devil’s Due are integrated into the story, such as the wrist-com gauntlets, and the not-quite-secret status of the G.I. Joe elite. Previous animated forays likewise portrayed the Joes as publicly recognized heroes. The Cobra V-Troops are introduced, but are never referred to as such, instead merely identified as "Venomized troops". 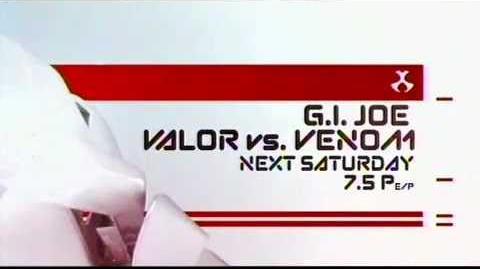