14 (List of Episodes)
Gēmusetto: Death Beat(s) is the second season of American animated series Gēmusetto and the follow up to season one: Gēmusetto: Machu Picchu. The series is produced by Adult Swim's Williams Street and written by Maxime Simonet who also voices the lead role Makasu. Having first premiered on Adult Swim as part of the network's April Fool's stunt in 2019, Gēmusetto combines various anime styles with humor and depictions of Inca gods.[2]

After being incinerated by the Inca sun god Inti, sportsman and relic thief Makasu joins a woman made entirely of fingers as they work to uncover the damage he has done. While embarking on his mission, Makasu must use his musical robot battle amphibian to reset death itself as every religion tries to judge his soul in the converging afterlives! 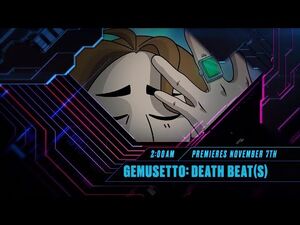 Gemusetto: Death Beat(s) premiered on Toonami on November 7, 2020 at 2:00 AM, replacing Black Clover. Initial announcements had Death Beat(s)' scheduled to air the final four episodes on December 19, 2020 during Toonami.[5] However, due to a last minute decision to air Wonder Woman: Bloodlines and Justice League: The New Frontier on the 19th, the remaining four episodes instead premiered outside of Toonami on the regular Adult Swim schedule the following day (December 20th).[6][4] The first two of the remaining four episodes aired on Toonami on January 2, 2021 at 2:00 AM. The final two episodes aired on January 9th at 2:30 AM.[3] The series was replaced in the lineup the following week by SSSS.Gridman.

Community content is available under CC-BY-SA unless otherwise noted.