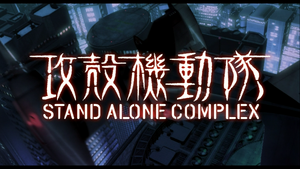 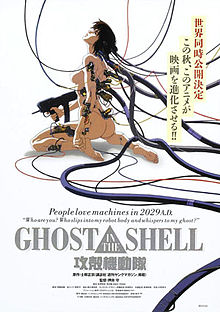 Ghost in the Shell is a 1995 Japanese anime science fiction film based on manga of the same name by Masamune Shirow. The film was directed by Mamoru Oshii, animated by Production I.G, and scripted by Kazunori Itō, with voice acting by Atsuko Tanaka, Akio Ōtsuka and Iemasa Kayumi.

A reproduced version of the original film titled, Ghost in the Shell 2.0 was made in celebration for the release of The Sky Crawlers in 2008. For the film's Version 2.0 release, all the original animations were re-produced with latest digital film and animation technologies, such as 3D-CGI. The original soundtrack was also re-arranged and re-recorded.

The "2.0" version was released in theatres in Tokyo, Osaka, Nagoya, Fukuoka, and Sapporo on July 12, 2008. The film was released in DVD and Blu-ray on December 19, 2008, in Japan. The North American release for the film was scheduled to be distributed by Warner Bros. Home Entertainment on the DVD and Blu-ray format. The Special Edition release was scheduled to include the original 1995 release alongside the Version 2.0 on a Double Layer Blu-ray, and complimented with the inclusion of a soundtrack CD and booklet with commentary detailing the Version 2.0 production. This has since changed and Manga Entertainment released the film on Blu-ray on November 24th, 2009. The original version of the movie is included on the disc, but it is merely the 480i laserdisc master encoded in 1080i. The original English dub was used for the new 2.0 version with the new sound effects.

Ghost in the Shell 2: InnocenceEdit 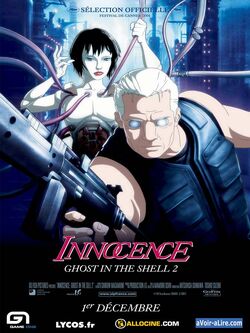 Ghost in the Shell 2: Innocence, known simply as Innocence in Japan, is a 2004 anime/computer animated science fiction film and sequel to the film, Ghost in the Shell. Released in Japan on March 6, 2004, and in the United States on September 17, 2004, Innocence had a production budget of approximately $20 million (approx. 2 billion yen). To raise such a large amount of money, Production I.G's president, Mitsuhisa Ishikawa, asked Studio Ghibli's president, Toshio Suzuki, to work on the project with him as a co-producer. The film is written and directed by Mamoru Oshii, with a story loosely connected to the manga by Shirow Masamune.

In order to better market the film outside of Japan, the Ghost in the Shell 2 moniker was added to the title of the film, with Innocence simply becoming the subtitle. This was seen by some fans as conflicting with Oshii's statements that the film wasn't in actuality a standard Hollywood-esque sequel, and was able to, and intended to, stand alone.

On December 28, 2004, DreamWorks (parent company of theatrical distributor Go Fish Pictures) released Innocence on DVD in the United States., Reviews immediately began appearing on Amazon and other websites criticizing the movie's subtitle track. Instead of including the overlay subtitles from the theatrical release, DreamWorks produced the DVD subtitles using closed captioning. The result was a script that intruded on the movie's visual effects; and in addition to reading dialogue, audiences saw unnecessary alerts like "Footsteps..." or "Helicopter approaches..." After receiving numerous complaints, DreamWorks released a statement saying that unsatisfied customers could exchange their DVDs for properly subtitled ones, postage paid; and that version 4 already had the proper subtitling.

Bandai Entertainment has released the film on Blu-ray and DVD in the United States, with an English dub also featuring the cast used in Ghost in the Shell: Stand Alone Complex. Bandai had licensed the film for a short period from Paramount.

Ghost in the Shell: Stand Alone Complex - The Laughing ManEdit 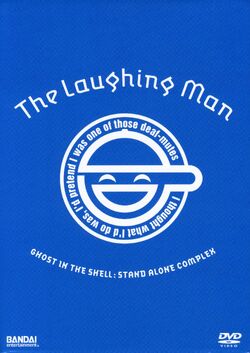 Ghost in the Shell: Stand Alone Complex - The Laughing Man is a feature-length OVA that was released in Japan on September 23, 2005, and in North America on October 2, 2007. The OVA retells the first season of the TV anime series with minor alterations to the storyline to accommodate an abbreviated take on the Laughing Man affair. Some additional animation and voice work was also added. Although the Japanese language version retained the voice cast from the anime series, the English version has a new cast of voice actors. The dialogue recording for the English version was produced by Ocean Productions. A Blu-ray version was released on December 22, 2010