2nd GIG aired on Cartoon Network's Adult Swim after the first season finished its run in 2005. 2nd Gig has also appeared on the newly revived Toonami block since its revival in 2012.[1] The series is rated TV-MA-V on Adult Swim.

The Story takes place two years since Section 9 helped topple the corrupt Japanese government. The new Prime Minister, restores them to their position as an official law enforcement unit. Section 9 is later recruited by Kazundo Goda, head of the Cabinet Intelligence Service, to intercede in an incident involving social refugees. The operation ends badly, straining tensions between the refugees and the government to breaking point. Over time, it becomes increasingly clear that Goda is manipulating Section 9 to suit his own personal agenda. Undertaking a risky plan to infiltrate the CIS's computer database, Major Kusanagi uncovers evidence implicating the CIS in terrorist activity. Shortly thereafter, a terrorist organization called the "Individual Eleven" (responsible for a string of violent attacks on Japanese citizens and an attempt to assassinate the Prime Minister) commit mass suicide live on television news. Believing that he was responsible for the horrific incident, Section 9 turns its full attention on Goda.

Meanwhile Hideo Kuze, the only member of the "Individual Eleven" that didn't commit suicide, leads the refugee population to rebel from the Japanese authority. Section 9 spends time, on Goda's orders, to attempt to track down and stop Kuze before he leads a mass rebellion against the government.

Major Motoko Kusanagi — A cyborg in the employ of "Public Security Section 9", a fictional division of the real Japanese National Public Safety Commission, as the squad leader. Little is known of Kusanagi's early history, though the series hints at some of her background, usually through flashbacks; commonly from the points of view of others, rarely from Kusanagi's. Motoko Kusanagi's various incarnations in the different manga, movies, or TV series all portray her differently. Since each of these have independent storylines, the physical and mental characteristics of Motoko Kusanagi has been modified in different ways to reflect the focus of the story; these changes are reflected in the different ways that artists draw her.

In the 2nd Gig episode "Kusanagi's Labyrinth – AFFECTION" it is revealed that as a young child Kusanagi was involved in a plane crash, the only other survivor of which was Hideo Kuze who later became a member of the "Individual Eleven". After spending an undefined period of time in a coma Kusanagi's ghost was transferred into a fully cybernetic body, presumably without her prior consent. After this she visited Hideo Kuze in hospital since he was still paralysed from the injuries he had suffered in the crash and eventually convinced him to undergo the cyberisation procedure himself. At the end of the series Kusanagi confessed that she couldn't remember what her real name was, indicating that Motoko Kusanagi is actually only a pseudonym, just as Hideo Kuze's name is as well.

Batou — A main male character in the Ghost in the Shell series, recruited from the Rangers, he is the second best melee fighter in Section 9 and is the second in command under Major Motoko Kusanagi. Batou keeps his life away from work mostly unknown. He also gave his favorite Tachikoma an unapproved, non-synthetic oil until the Major caught him. In the first Stand Alone Complex series, the Laughing Man hacked into his eyes so that Batou could not see him.

According with Tachikomatic Days of episode 21 (Season 1), he has a can of beer after his bath and he takes out his eyes before going to sleep. Also, he often uses up his paycheck buying muscle training equipment for the upper body, which others find useless, considering his extensive number of cyborg parts (mainly torso and arms). In the first season of Stand Alone Complex, it is inferred that he uses it to remind himself of who he is, despite his cyberization, much like the watch the Major wears. Batou is also a chain smoker.

Daisuke Aramaki — Chief of Public Security Section 9. In Stand Alone Complex, Lt. Col. Aramaki is a strict chief, and is referred to by others in Section 9 as the "old ape". Even so, he is fiercely loyal to the members of Section 9, and often puts his own career on the line to ensure the survival of the rest of his team.

In 2nd GIG, Aramaki uses his political connections and no small amount of bargaining with the new prime minister to get Section 9 reinstated. He is shown to have a disconnected brother of similar age in the Dejima with the refugees

Togusa — The second most prominently featured male character in the Ghost in the Shell manga & anime series. In Stand Alone Complex it is stated that he is the only member of Section 9 who has not undergone cybernetic replacement in some manner as he had been referred to as 'natural'. In the movie it is claimed that it is precisely because of his lack of cybernetic enhancements that he was chosen for Kusanagi's team. In the manga, it is unclear as to what extent he has undergone cybernization, although in both the manga, anime and movies he has a cyberbrain like all other members. Togusa is 27 years old and is 5' 10 inches in height.

Ishikawa — The information warfare/technology specialist in Public Security Section 9. It has not been stated in the series thus far as to the degree that he has been cybernetically augmented, though character dialogue (and his long recovery time from an injury) suggests that he is one of the least augmented members of Section 9. His appearance is characterized by a large beard and perpetually unkept hair, and he is the oldest of Section 9's field operatives. Ishikawa is especially well known for his frequent, long-winded and often rather complicated expository speeches to the other characters, in order to inform them (and the show's audience) of new story developments. Despite being a member of Section 9, Ishikawa appears to be relatively physically weak in comparison to the other members. He is almost never shown in combat (though in one episode he fires a shoulder-mounted cannon to disable a heavily-armored vehicle) and takes a support role during most missions in which he is dispatched.

He formerly served with Kusanagi and Batou in South America when they were with the Ground Self-Defense Forces in the Japanese UN contingent. He was one of the earliest members recruited to be in Section 9 and seems to know the Major and her dislikes quite well. He is shown as being in charge of a pachinko parlor called Parlor Ishikawa, and on occasion uses the cyberbrains of the old men who play there to complete particularly heavy data gathering (though it seems the men suffer no ill effects or are even aware of their situation, and are in fact 'paid' with wins at pachinko for use of their 'processor' time). Ishikawa is the most seemingly laid-back member of the unit.

Saito — Among the members of Section 9, Saito is regarded as one of the least cyberized. He can handle any automatic firearm with deadly accuracy and precision, but his primary role is as the unit's tactical sniper. Saito's left arm is cybernetic, allowing him to support and steady extremely large sniper weapons with superhuman skill. His left eye was replaced with the "Hawkeye", a prosthetic eye that interfaces with satellites to allow for shots of incredible accuracy. The Hawkeye, however, can be hacked, as it is in Episode 2 of SAC. It is impossible for Saito to escape hacking by going into autistic mode because he needs to maintain his Hawkeye's satellite uplink. Saito is also valued for his ability to think like enemy snipers; on two separate occasions his ability at determining sniping locations impacted Section 9's actions. Like Ishikawa, Batou and Pazu, Saito is a cigarette smoker.

Paz — An investigator in Section 9. Before joining Public Security Section 9, Paz was rumored by various police circles to have been a gangster in several yakuza groups in Japan. Paz is the backup "jack-of-all-trades" for the field agents and is also a known chain smoker within the unit. Upon his first encounter with the Major, he remarked, "I never sleep with the same woman twice." He uses a folding knife in combat. His name is often pronounced as its Japanese counterpart, Pazu in Ghost in the Shell: Stand Alone Complex series.

Borma — Section 9's resident explosives specialist, as shown several times during 2nd GIG. He is the only Section 9 operative with similar height and enhanced strength to Batou. He also has optical implant eyes of a similar general design to Batou's, though his optics are a different color and might be another model with different capabilities. Both his eyes and his baldness are his trademark features. In addition to his role as Section 9's explosives specialist, Borma often handles the task of rear support. In most assignments, he's the only member to carry heavy weaponry. He also works as the team's resident cyberviral warfare expert, often developing vaccines for viruses within minutes of their creation. He is usually teamed with either Saito for sniping duties, Paz for general operations, or Ishikawa for cyberweb research and viral warfare.

Of his past, little is known though some can be guessed from speculation and comments made in the series. At one point, Borma was in the JSDF as a demolitions expert, possibly hinting that he was either a combat engineer or a special forces operative. This character's name is often pronounced as its Japanese counterpart as Boma.

Azuma — One of Section 9's new recruits in Stand Alone Complex 2nd Gig. Azuma was recruited as one of the field operatives in Section 9 from JGSDF Intelligence. He was present at the shipyard battle in which fellow rookie Yano died and was pulled out of field duty prior to the Dejima confrontation. At the end of 2nd Gig it is implied that Azuma is now a full fledged member of Section 9.

Yano — One of Section 9's new recruits in Stand Alone Complex 2nd GIG. Yano was recruited by Section 9 as a rookie and field operative. Yano was killed in the raid on Kuze's false location in the 2nd GIG episode "Chain Reaction", making him Section 9's first officer to be killed in the line of duty from hostile gunfire. Yano also appears briefly in the manga as a new recruit. In the manga he was killed by a Russian named Koil Krasnov, whom he was tailing as his first assignment.

Proto — One of Section 9's new recruits in 2nd GIG. Proto is Section 9's only (prototype) bioroid member and was also the Tachikoma's maintenance technician (before becoming one of the new recruits). During the Dejima crisis Proto played a key role in helping Aramaki rescue the Prime Minister Yoko Kayabuki, who had been relieved of her duty and arrested under charges of treason.

Proto managed to gain access to the net, where he communicated with Section 9's Tachikoma units. Through which, Proto was able to gain building blueprints and up-to-date information on Section 9's Dejima operation, as well as the location of the Prime Minister, before an attack barrier disabled him. 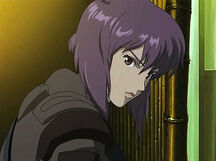 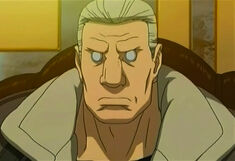 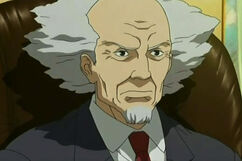 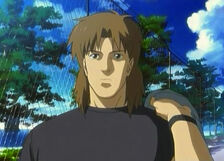 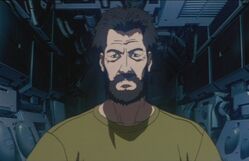 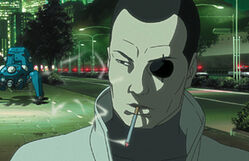 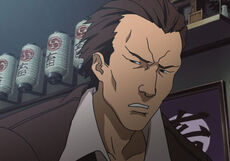 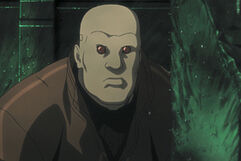 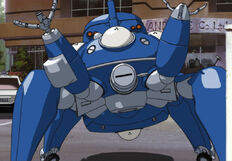 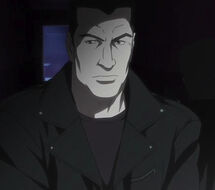 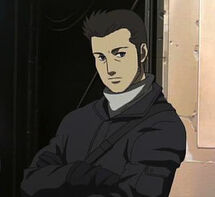 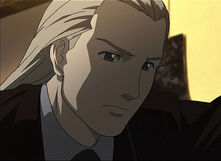 Each episode has both a title and a subtitle. Unlike in the first series, the second series has three designations denoting the type of episode: individual (IN), dividual (DI) and dual (DU). IN episodes tie in with the Individual Eleven storyline; DI episodes are stand-alone episodes not strongly tied with the other storylines; and DU episodes tie in with the Cabinet Intelligence Service & Goda story-line (though the two main storylines inter-relate). There are 11 individual, 11 dividual and 4 dual episodes.

2nd GIG was later adapted into a feature-length OVA, titled Individual Eleven, which was released in 2006; Solid State Society, a TV-film sequel to the Stand Alone Complex series, was also released in that year.