27 (List of Episodes)
Gurren Lagann, known in Japan as Tengen Toppa Gurren Lagann, is a Japanese mecha anime television series animated by Gainax and co-produced by Aniplex and Konami. It ran for twenty-seven episodes on Japan's TV Tokyo between April 1, 2007 and September 30, 2007. It was directed by Hiroyuki Imaishi, written by veteran playwright Kazuki Nakashima and had been in development since the participation of the famed animator in the Abenobashi mecha themed episodes by the same studio. The series was rated TV-PG-DLV and TV-14-DLSV on Adult Swim.

Although initially announced to be licensed in North America by ADV Films in 2007, the license was transferred to Bandai Entertainment in 2008, and then Aniplex of America later acquired the North American license in 2013. The series was also announced for a UK release by ADV Films in 2007, followed by Beez Entertainment holding the UK distribution rights in 2008, and finally Anime Limited in 2013 for the television series, with the films and Parallel Works also included. It was also announced by ADV Films Germany for a summer 2008 release. The Sci Fi Channel acquired the broadcasting rights of Gurren Lagann, and began airing the anime on July 28, 2008 as part of Sci Fi's Ani-Monday anime block.

Gurren Lagann takes place in a future where Earth is ruled by the Spiral King, Lordgenome, who forces mankind to live in isolated subterranean villages. These villages have no contact with the surface world or other villages, and are under constant threat of earthquakes. Selected villagers called diggers are conscripted to expand their homes deeper underground. Simon, a meek young digger ostracized by his peers, finds solace in his best friend and older brother figure, an eccentric delinquent named Kamina. Kamina encourages Simon to join his gang, Team Gurren, to help him achieve his dream of visiting the surface world. One day, Simon unearths a drill-shaped key called a Core Drill, followed by a small mecha resembling a face called a Gunmen. Shortly thereafter, a giant Gunmen crashes through the ceiling and begins attacking the village, followed by a girl named Yoko who attempts to repel the Gunmen. Simon uses his Core Drill to activate the smaller Gunmen (which Kamina names Lagann), and it is used to destroy the larger Gunmen and break through to the surface world.

Simon and Kamina learn from Yoko that humans on the surface are attacked each day by Gunmen piloted by beastmen, humanoid creatures who serve as Lordgenome's army. Kamina hijacks a Gunmen and names it Gurren, combining it with Simon's Lagann to form the mecha Gurren Lagann. Their actions inspire other humans to steal their own Gunmen and join Team Gurren, which makes Kamina rename it Team Dai-Gurren. Eventually Team Dai-Gurren captures an enemy Gunmen fortress to use as their base of operations, though Kamina is killed in the preceding battle by one of Lordgenome's four generals. Rossiu, a boy from another village, takes over the job of piloting Gurren, but Kamina's death causes Simon to sink into depression until he meets Nia, Lordgenome's daughter. Team Dai-Gurren is initially distrustful of her, but allows her to join when it becomes apparent that she was abandoned by her father, like many that came before her. Nia helps Simon come to terms with Kamina's death, and the rest of Team Dai-Gurren prompt him to take up the role as the team's leader, leading them and other humans, who captured other Gunmen and Gunmen fortresses, to Lordgenome's palace, where they defeat Lordgenome and the Beastman army.

Over the next seven years, mankind prospers on the surface world with Simon and the members of Team Dai-Gurren serving as the world's government. As soon as the world's population reaches one million people, an alien race called the Anti-Spirals emerges and uses Nia to announce the moon's collision with Earth, which will wipe out all life on the planet and prevent them from evolving to such an extent that they will risk destroying the universe in a cataclysmic event called the Spiral Nemesis. With guidance from a resurrected Lordgenome, who had hidden mankind underground to protect them from the Anti-Spirals, Team Dai-Gurren prevents the moon's collision, rescues Nia, and destroys the Anti-Spirals. This, however, causes Nia to fade away and die as her own existence is tied to that of the Anti-Spirals. Simon spends the rest of his life wandering the planet as a nameless vagrant while his comrades set out to contact other races throughout the galaxy to help prevent the Spiral Nemesis and ensure the safety of the universe.

Simon — Simon is the main protagonist of Gurren Lagann. He is introduced as a fourteen-year-old digger from Giha village who is looked down upon by many of his peers for his timid and weak character. He greatly admires Kamina, one of his few friends in the village, and refers to him as his brother despite them not being related by blood. Simon spends much of the first quarter of the series following after Kamina, but gradually acquires his own fighting spirit and determination over the course of the series, acting on his own more often until his personality mirrors that of Kamina. His discovery of the Core Drill and the Gunmen Lagann are what set the events of the series in motion. Throughout the series, Simon primarily pilots Lagann, which is capable of producing drills from any part of its body when it reacts to Simon's Spiral energy. He uses this ability to combine with Kamina's Gunmen, Gurren, to form Gurren Lagann. He can also take control of other Gunmen using this ability.

Kamina — Kamina is a refractory youth from Giha village who dreams of leaving his underground home and going to the surface world, which he saw as a child. His extremely passionate and self-confident personality causes him to act as a foil for the more timid and weak-willed Simon, and serves to instill courage within Simon. His actions greatly influence the entire series, as he forms Team Dai-Gurren and acts as its leader to combat the threat of Lordgenome and the beastmen. Early in the series, Kamina hijacks a Gunmen he names Gurren, which he pilots while combined with Simon's Lagann to form Gurren Lagann.

Yoko Littner — Yoko is a young woman from Littner, a village neighboring Giha, and is introduced as a member of a small resistance against the beastmen. She helps introduce Simon and Kamina to the surface world, and becomes a member of Team Gurren soon after. She falls in love with Kamina early in the series, and thinks little of Simon until he begins showing signs of self-confidence. Later in the series, she forms a sisterly relationship with Simon. Instead of piloting a Gunmen, she wields a high-powered energy rifle and uses her superb marksmanship and wise council to help her teammates.

Nia Teppelin — Nia is a major character introduced later on in the series. Having lived a sheltered life as the daughter of Lordgenome, the main antagonist of the first half of the series, she is ignorant of the war between the humans and Lordgenome until she is abandoned by her father and discovered by Simon. She is a very polite and naive girl who is curious about the world, and acts as a soothing influence for Simon following his depression caused by Kamina's death. 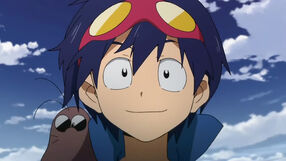 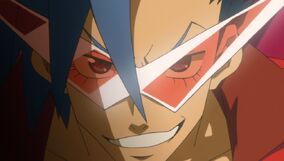 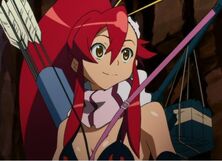 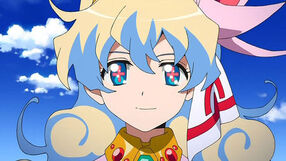 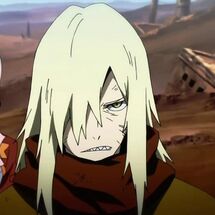 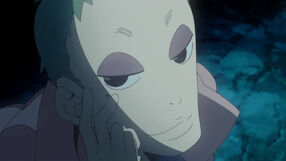 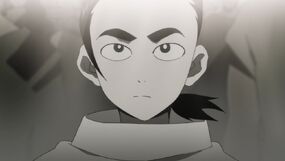 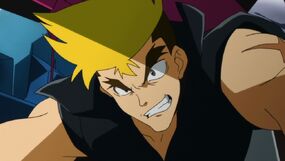 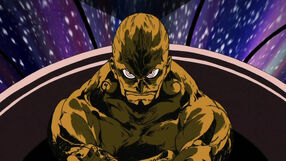 Each episode's title is derived from a line spoken by a specific character from the series: the titles from episodes 1 through 8 are spoken by Kamina, episodes 9 through 15 by Nia, the preview for episode 16 by Viral, episodes 17 through 22 by Rossiu, and episodes 23 through 27 by Simon.

The English rights to the series had previously been licensed by ADV Films, but were later acquired by Bandai Entertainment. A subtitle-only version was released in three DVD volumes in July 2008, and an official English dub with the first two volumes was released on November 18, 2008. Aniplex of America re-released the series in a limited edition DVD box set on May 9, 2013. Also, a Blu-ray Disc box set, which includes both the television series and the two film adaptations, was released on June 26, 2013.