Ongoing (List of Episodes)
Harley Quinn is an American animated series based on the DC Comics character of the same name created by Paul Dini and Bruce Timm. The series is produced by Yes, Norman Productions, Ehsugadee Productions, DC Entertainment and Warner Bros. Animation and written and executive produced by Justin Halpern, Patrick Schumacker, and Dean Lorey.[2] The series' first season premiered on DC Universe from November 29, 2019 to February 21, 2020 and was followed by a second season which aired from April 3, 2020 to June 26, 2020.[3] The series has been renewed for a third season which will air on HBO Max.[4]

The series follows Harley’s adventures after she breaks up with the Joker and strikes out on her own. With the help of her friend Poison Ivy, Harley tries to earn a seat at the biggest table in villainy: the Legion of the Doom. To accomplish this goal she assembles a ragtag crew of down-on-their-luck villains including: Doctor Psycho, Clayface, King Shark and Sy Borgman. The series takes place in a goofily skewed version of the DC Expanded Universe, full of superheroes, their arch-nemeses, and a plethora of side characters.

Harley Quinn (Dr. Harleen Frances Quinzel) — The titular main protagonist of the series, Harley is the leader and founder of Harley's Crew. She is the former girlfriend of The Joker and is currently dating her longtime friend Poison Ivy. After realizing the Joker doesn't love her, she leaves him and begins her own criminal career. She aspires to join the Legion of Doom and assembles her own crew in order to make a name for herself in the criminal world.

Poison Ivy (Dr. Pamela Lillian Isley) — A fellow Arkham Asylum escapee and Harley's best friend. She usually favors plants over people, but she has a soft spot for Harley and joins her new crew after she leaves the Joker. Ivy is a supervillain with plant-based abilities.

Doctor Psycho (Edgar Cizko) — The first villain recruited to Harley's crew. He was formerly an esteemed member of the Legion of Doom and was married to Giganta (he used his telepathic powers to make her fall in love with him) and had a son named Herman Cizko. He is a noted bigot and misogynist and has made several comments that ended up becoming a serious detriment to his career, resulting in his expulsion from the Legion. Doctor Psycho's mental powers include telekinesis, levitation and telepathy.

Clayface (Basil Karlo) — A shapeshifting humanoid figure made of clay and a member of Harley Quinn's crew. He was an actor who was transformed into a clay man after a "pottery accident." He worked as a bartender at Noonan's Bar before joining Harley's crew. He can usually make his disguises believable due to his shapeshifting ability but his eccentricities as an actor often ruin them.

King Shark — A member of Harley Quinn's crew who was introduced to Harley by Clayface as an expert hacker. While he is normally kind and peaceful, he will go berserk if he smells blood. He's a shark/human hybrid that can use his fang-filled jaws to easily tear through enemies and bite people in half. He also possesses super-human strength and can breathe underwater.

Sy Borgman — He was once a CIA agent whose body was enhanced with state of the art robotic limbs. However, after many years these parts are now antiquated technology and he moves around via wheelchair. In retirement he is a landlord and rents an apartment to Poison Ivy. After almost burning up the lifeless bodies of Harley's crew, he joins the villains to get a taste of his old life. 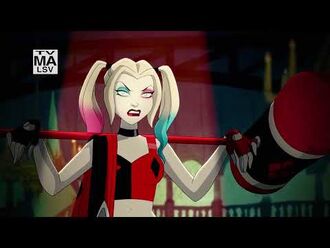 The series began airing on Toonami France on October 15, 2020. The series' first season was scheduled to air on Adult Swim's Toonami programming block in the United States on August 7, 2021 in a 6.5 hour marathon from 10:30 PM to 5:00 AM. However, due to a scheduling error, the episode did not air and a rerun of episode 4 "Finding Mr. Right" aired instead.[1][11]

Harley Quinn appeared in only one Toonami marathon titled the Harley Quinn Marathon on August 7, 2021.