He-Man and the Masters of the Universe: The Beginning

4:00 PM
He-Man and the Masters of the Universe: The Beginning is a 90-minute movie composed of the initial He-Man and the Masters of the Universe 3 episode story arc: "The Beginning, Part 1-3". The movie aired only twice on Cartoon Network as a special sneak preview of the upcoming series. The movie premiered on Cartoon Network's Toonami programming block on August 16, 2002 from 4:00-5:30 PM.[1][2] The movie also aired the following night, August 17, 2002, during Cartoon Network's Cartoon Theatre.[2][3]

At the Hall of Wisdom, Captain Randor approaches the Elders and warns them that Keldor's forces are moving on the capital and will soon be within the Hall of Wisdom. The Elders state that Keldor's forces will be defeated and that Captain Randor will rule Eternia as King in place of the Elders. An explosion interrupts the conversation and through the smoke emerges Keldor and his Evil Warriors.

Captain Randor orders the heroes to pursue the Evil Warriors. As he stands alone in the Hall of Wisdom Captain Randor hears a voice, that of the Sorceress. She informs Captain Randor that the heroes will succeed in pushing Keldor's forces to the Dark Hemisphere, and states that when the evil returns, a hero shall emerge to protect Eternia.

Many years later at the Royal Palace of Eternia, Prince Adam and Teela are testing their battle skills. Man-At-Arms informs Adam that he needs to work harder on his fundamentals, and begins to remind Adam about the forces of evil.

On the other side of the Mystic Wall in Snake Mountain, the Evil Warriors listen as Skeletor displays his newest device, which will cause a massive quake strong enough to breach the Mystic Wall. Skeletor informs his Evil Warriors that it lacks one vital ingredient: the Coridite crystal, which Mer-Man arrives with at that very moment.

At the Royal Palace Man-At-Arms receives a telepathic signal from the Sorceress, and within a matter of seconds he asks Adam to accompany him to Castle Grayskull. Meanwhile Skeletor questions a man regarding the existence of the Hall of Wisdom and The Council of Elders. Skeletor refuses to believe that all that power could have just simply disappeared. King Randor begins to offer a toast in honor of his son Prince Adam, but when he realizes that he is nowhere to be found he abandons the toast. At that same moment Man-At-Arms and Adam arrive at Castle Grayskull. The jaw-bridge lowers and the two venture into the castle. The pair enter what appears to be a throne room where they are greeted by the Sorceress.

The Sorceress explains to Adam that many years ago Captain Randor and the forces of good drove Keldor and his Evil Warriors to the Dark Hemisphere. The Mystic Wall was created to ensure that the villains would stay on the other side of Eternia. Fearing that the villains would one day break free, The Council of Elders transformed themselves into a magical crystal orb that was hidden deep within Castle Grayskull. A bemused Prince Adam prepares to leave, but the Sorceress tells him that The Council of Elders foretold of a day when a hero would emerge to protect Eternia. The Sorceress tells Adam that he is to be transformed into He-Man. Adam thinks it all to be a birthday prank and leaves Castle Grayskull. Journeying back to the Royal Palace on a Sky Sled, Adam is shocked when he sees his home in ruins.

Prince Adam continues to make his way towards the smoldering ruins of the Royal Palace. There he immediately sees his mother taking care of one of the victims of the attack. She informs Adam that it was Keldor's forces that attacked the Royal Palace, and that King Randor and the defenders of Eternia are currently trying to drive them back to the Dark Hemisphere.

Man-At-Arms appears on his Sky Sled and tells Prince Adam that the battle is now positioned at the eastern perimeter of the Evergreen Forest. Queen Marlena does not want her son to journey into combat, but Man-At-Arms states that Prince Adam has his duty. At the battle site Stratos tries to ground Beast Man atop his griffin, as Teela attempts to disarm the hideous Trap Jaw. Man-At-Arms arrives at the battle scene only to come face-to-face with Clawful, as Adam stands off against Whiplash.

King Randor and Skeletor's battle is a furious one, mixed with skillful swordsmanship and acrobatics. Skeletor approaches King Randor and reveals his skull-like appearance for the first time, saying that he is no longer Keldor. Skeletor and Beast Man take to the skies on their Griffins with King Randor as their captive. Adam flees the battle scene knowing that he must make his way to Castle Grayskull with Orko and Cringer close behind. Evil-Lyn casts a spell that results in a huge explosion wiping out a portion of the Evergreen Forest and knocking her attackers back. The heroes and villains continue to battle with the Evil Warriors beginning to gain the advantage.

Meanwhile Prince Adam arrives at Castle Grayskull, the jaw-bridge already lowered. The Sorceress appears before him and Adam follows her through the maze-like corridors of the castle. Unbeknown to Adam, Orko and Cringer appear at the jaw-bridge and follow him inside. Prince Adam follows the Sorceress until she stops in a room, and the two face each other. The Sorceress taps the floor with her staff and a large portion of the floor lowers. Prince Adam and the Sorceress enter a vast magical space adorned with large platforms and blue crystals. The pair are transported to a specific platform where Prince Adam discovers a magical crystal orb that holds The Council of the Elders' power within. The Sorceress uses her magic staff to summon a container that appears to Prince Adam, a container that holds the Sword of Power. Prince Adam calls upon the power of Grayskull, and the magical crystal orb that holds The Council of the Elders' power unleashes a huge blast of energy that transforms him into He-Man.

The Sorceress states that He-Man will need a loyal companion, and so Cringer is transformed into Battle Cat. He-Man, Battle Cat and Orko leave Castle Grayskull and prepare to return to the battle in the Evergreen Forest.

Back at what remains of the Evergreen Forest the heroes are falling further and further back as Skeletor's Evil Warriors continue their fierce onslaught. As the heroes attempt to develop a battle plan, Evil-Lyn turns a harmless Magmatite shower into a barrage of large rocks that rain down on them. At that very moment King Randor regains consciousness as Skeletor continues to question him on the location of The Council of Elders and the power of Eternia.

The Magmatite shower continues to rain down on the heroes, each being knocked unconscious one by one. Just as Teela is about to evade a large Magmatite, one of Tri-Klops' Doomseekers fires a beam that holds her in her path. Just as Teela appears to have no hope, He-Man destroys Tri-Klops' Doomseeker and leaps to Teela's defense. Teela looks up in amazement at a shadowy figure standing before her, the large Magmatite rock hurtling toward them.

Proving that he is the most powerful man in the universe, He-Man punches the large Magmatite rock hurtling towards himself and Teela. The blow is so powerful that the resulting explosion causes a large shockwave that forces the villains to step back in amazement. Man-At-Arms instantly recognizes He-Man as the more powerful form of Prince Adam. Orko arrives and nearly reveals the secret of Prince Adam, with Man-At-Arms interrupting the Trollan saying that he knows of He-Man from what the Sorceress has told him. The villains are surprised by the appearance of the new warrior, prompting Evil-Lyn to make the Magmatite shower even more powerful. He-Man impressively lifts a large piece of rock and the villains watch as the large rock protects the heroes from the Magmatite shower. Evil-Lyn stops the Magmatite shower realizing that the heroes are in no danger whatsoever. He-Man throws the large rock towards the vantage point where the villains reside.

He-Man approaches the heroes. He states that he must rescue King Randor from Skeletor, but tells the heroes that they are brave warriors, dubbing them the "Masters of the Universe." Suddenly a giant fish ridden by Mer-Man eats Man-At-Arms. The heroes watch in disbelief as the giant fish takes to the skies. At that moment the other Evil Warriors attack the Masters, with Teela pursuing the giant fish, and Mer-Man, on her flying disc. Meanwhile Skeletor is finally convinced that King Randor knows nothing of the whereabouts of The Council of Elders, and so decides that revenge is the only option left to him.

As He-Man and Battle Cat race to save King Randor, Man-At-Arms is having trouble staying away from the stomach acid of the giant fish. Mer-Man notices Teela, reaches for his sword, and blasts Teela with a stream of water, knocking her from her flying disc and into the sea below. Skeletor, alongside Panthor has King Randor at the edge of a cliff. Just as Skeletor prepares to push King Randor, He-Man and Battle Cat appear. He-Man and Skeletor make their introductions, as King Randor remembers what the Sorceress had told him all those years ago. He-Man and Skeletor engage in a vicious swordfight with Battle Cat and Panthor also engaging in combat. Meanwhile Man-At-Arms throws a nitro-gas grenade into the creature's stomach acid. The grenade immediately takes effect and the creature is forced to expel the gas from its mouth. Teela catches her father on her flying disc, and they head back.

Meanwhile He-Man and Skeletor are still dueling ferociously. Skeletor states that if He-Man does not allow him to leave, then he will blast the ledge sending King Randor to his doom, adding that He-Man's "weakness" is his sentimentality. As the villain leaves he blasts the ledge sending King Randor into the chasm below. He-Man immediately leaps over the edge and after a failed first attempt manages to catch King Randor, and the two hang at the side of the chasm. As they contemplate how to get back to the high-ground the other Masters arrive to aid them.

At the Royal Palace Man-At-Arms commands Orko never to speak of what he saw at Castle Grayskull. Prince Adam starts questioning what traits He-Man has that he does not. Just as Prince Adam is about to tell his parents and Teela that he is He-Man, Zoar appears at the window. Adam knows that he must never reveal the secret to those he cares about, and concludes that He-Man is a friend; with Man-At-Arms adding that he is also a great hero. At Snake Mountain, Skeletor claims that as soon as he removes He-Man all of Eternia will be his. 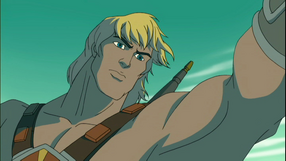 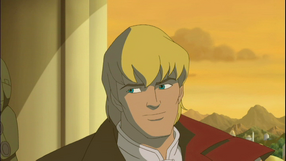 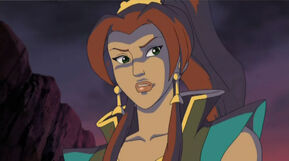 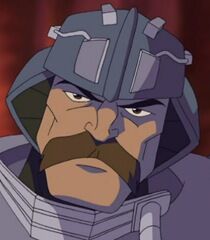 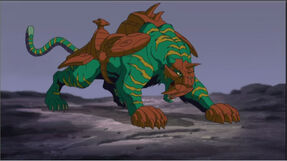 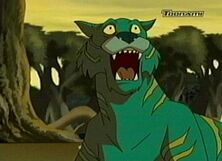 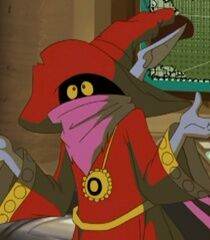 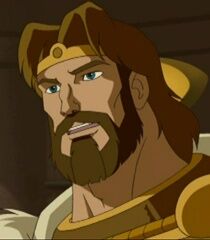 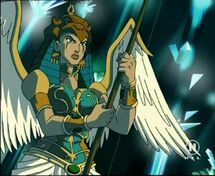 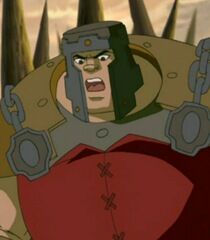 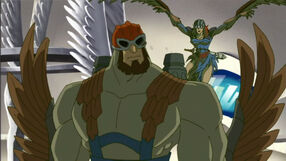 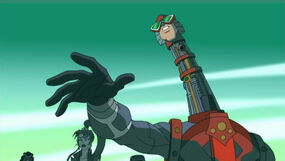 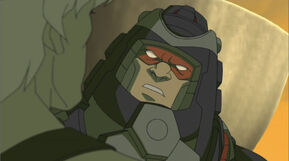 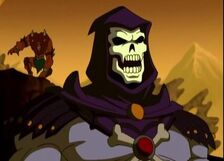 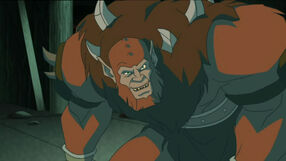 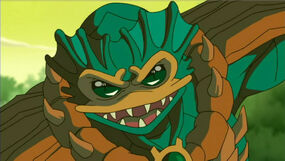 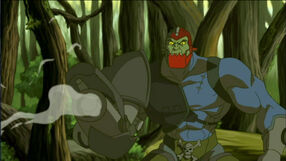 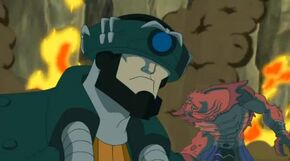 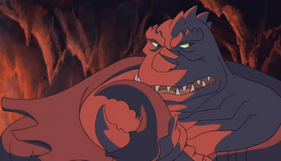 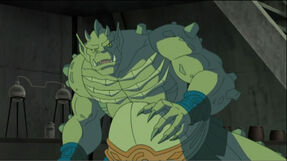 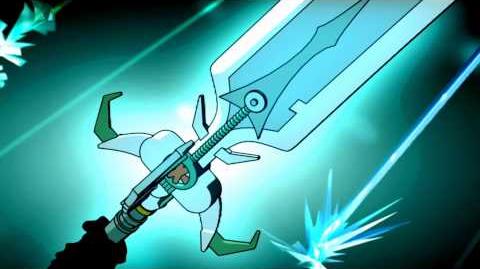 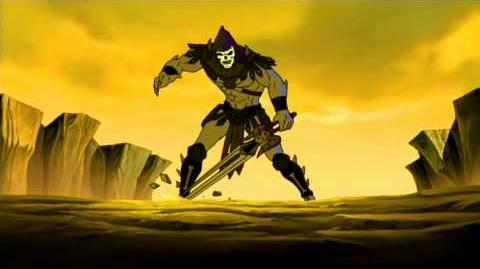