8:00 PM
Hellboy: Sword of Storms is the first of the Hellboy animated film series (the second being Hellboy: Blood & Iron) based on Mike Mignola's popular comic book series Hellboy and the live-action film of the same name. The movie features most of the actors from the Hellboy feature film reprising their roles, including Ron Perlman as Hellboy. The movie was released on DVD by Anchor Bay Entertainment on February 6, 2006.

The film was produced by Starz Media's Film Roman and Revolution Pictures and co-produced, co-written, and directed by animation veteran Tad Stones. Stones is perhaps best known as the creator of the popular Disney Afternoon series Darkwing Duck. He also worked with Mignola on developing Atlantis: The Lost Empire into an animated series.

Hellboy: Sword of Storms was nominated for Outstanding Animated Program (For Programming One Hour or More) at the 59th Primetime Emmy Awards.

The film opens with the story of two mystical brothers "Thunder" and "Lightning" powerful demons with control over storms, and brothers to dragons who threaten an ancient Japanese lord who agrees to give them his beautiful daughter in exchange for their boon and mercy. However one of his soldiers, who is in love with her has a sword created with magic to defeat Thunder and Lightning, trapping them within the blade for all time.

Though safe, the lord's honor is wounded by this treacherous act, and in an act of vengeance summons the gods to turn the soldier to stone. He then meets with his daughter, waiting for her rescuer's return and kills her. In modern Japan, a folklore expert Professor Sakai obtains the scrolls telling these stories and is suddenly possessed by the spirits of Thunder and Lightning, driving him mad and in search of the sword that possesses their spirits. After he attacks one of his associates; an antique sword collector, the Bureau for Paranormal Research and Defense is alerted and Hellboy, Kate Corrigan, and a psychic Russell Thorne are called with a team to investigate.

While there, Hellboy picks up a discarded samurai sword and vanishes. Finding himself in a different world, Hellboy is told by a wise kitsune that the sword is the Sword of Storms, containing the spirits of Thunder and Lightning and the goal of his journey lies to the west. During his time there, Hellboy encounters several mythical Yōkai who try to steal the sword from him including the kappa, a giant oni, a trio of rokurokubi, a Jorōgumo, Gashadokuro, tengu, Yomotsu-shikome, and three restless ghosts. Hellboy also meets a group of nukekubi in a segment of the film that is adapted almost verbatim from the comic book story, Heads. Each of them outsmarted and defeated by the wayward demon.

Meanwhile, while investigating his disappearance Abe Sapien and Liz Sherman are called to the sites of disturbing earthquakes and discovers that the Dragons are returning. After being confronted by the same kitsune who guided Hellboy, they are instructed they must stop the dragons from emerging. One of the dragons attacks Abe and Liz but Liz manages to hold it back using her pyrokinetic abilities. After being attacked by animated objects of folklore, Corrigan and Thorne follow Sakai to a shrine featuring a stone warrior, at the same time, Hellboy is tricked into destroying the sword, returning him to the shrine and releasing Thunder and Lightning, freeing Sakai from the curse.

After an intense battle, Hellboy manages to trick both spirits back into the sword, and as a result, the emerging dragons all over the world are sealed back into the underworld for good. The spirits of the maiden and lord inhabit Corrigan and Thorne, about to replay the maiden's execution. Hellboy manages to save Corrigan by tossing the petrified form of the soldier, its shattered fragments knocking Thorne out before he could deliver the final blow, and indirectly freeing the trapped spirit of the soldier. He and Hellboy both manage to convince the lord not to kill his daughter and forgive her, breaking the cycle of their unending deaths. The spirits depart, thankful to Hellboy and the others for helping them. 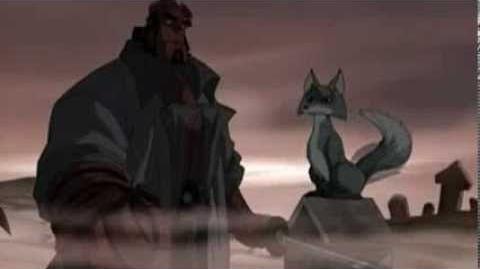 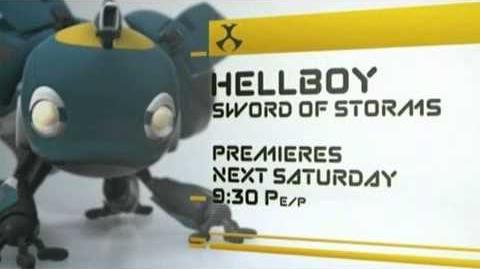