The series was previously licensed for English language release in North America by Geneon Entertainment[4], however Funimation acquired the license in 2008.[5] In producing the English dub of the series in association with New Generation Pictures, much of the original cast from the dub of the anime series was used, which the company had also licensed.[6]

Hellsing is named after and centered around the Royal Order of Protestant Knights, originally led by Abraham Van Helsing. The mission of Hellsing is to search and destroy those that threaten Queen and Country from the undead and other supernatural forces of evil. This organization is currently led by Sir Integra Fairbrook Wingates Hellsing, who inherited the leadership of Hellsing as a child after the death of her father. She witnessed his death which turned her from a once innocent and shy little girl to a tough and deadly force. She is protected by the faithful Hellsing family butler and former Hellsing "trashman" Walter C. Dornez, a deadly foe in his own right, and Alucard, the original and most powerful vampire that swore loyalty to the Hellsing family after being defeated by Van Helsing one hundred years before the story takes place. These formidable guardians are joined early on in the storyline by former police officer Seras Victoria, whom Alucard turned into a vampire. She is mostly involved for satire and comedy and beauty as a new vampire trying to learn a new lifestyle.

As the scale and frequency of incidents involving the undead escalate in England and all around the world, Sir Integra discovers that the remnants of a Nazi group called Millennium still exist and are intent on reviving the Third Reich by creating a battalion of vampires. Millennium, Hellsing, and the Vatican section XIII Iscariot clash in an apocalyptic three-sided war in London, and Millennium reveals its true objective: to destroy the vampire lord Alucard, ending a feud begun during World War II.

Alucard — Alucard is the most powerful vampire that serves the Hellsing Organization. Alucard taunts and belittles his opponents, allowing them to inflict wounds before healing and retaliating. He longs for battle and has been shown to become angry when his opponents kill themselves. His lust for battle is fueled by a desire to find an opponent powerful enough to end his eternal life, though he wishes only to be slain by a human, for, "Only a man can truly hope to kill a monster."

Seras Victoria — acts as the point of view character for the audience. Seras is a Draculina, a term used to refer to the female members of the Dracula bloodline, since she has been turned into a vampire by Alucard. In the series, Seras was originally a police officer who, along with the rest of her squad, was sent into the village of Cheddar, where a vampire had taken control of the town and turned its inhabitants into "ghouls" (zombies controlled by vampires). She was taken hostage by that priest vampire. After shooting through her to kill the rogue vampire, Alucard offers to turn Seras into a vampire to save her from dying. She chooses vampirism, as with virgin blood she will become a vampire rather than a ghoul.

She is also a tomboy; a very brave, strong-willed and heroic young woman who often rejects following orders of her master that cross with her personal beliefs. However, she is a loyal and trustworthy soldier who will diligently follow the orders of her commander, provided said commander has proven his or her worth.

Sir Integra Fairbrook Wingates Hellsing — Integra Hellsing is a 22-year-old noblewoman member of the Protestant Knights who is the head and last member of the Hellsing family, the Bureau Director of the Hellsing Organization, and the current master of Hellsing's vampire, Alucard. Integra is usually a collected individual, rarely allowing her emotions to get in the way of business. However, she is sometimes prone to fits of anger. The Hellsing family is "on a mission from God", and she values her duties to protect the United Kingdom and the Anglican Church above everything else. For her, failure is not tolerated, especially her own. She runs the Hellsing Organization with charisma and patriotism, and she is one of the few people who can stand up to the force of Alucard's personality and command his respect.

Walter C. Dornez — Walter C. Dornez serves primarily as Integra's butler and also makes special weapons for use by Hellsing's vampires, Alucard and Seras Victoria. However, he is still one of the organization's most capable operatives, wielding high-velocity monomolecular wires with incredible skill and precision. Walter's efficiency and power was so great that he earned the nickname the "Angel of Death," and even at the age of 69, Walter can still rip his way through hordes of the undead.

Alexander Anderson — Alexander Anderson acts as an antagonist to his nemesis, the protagonist Alucard. He is a warrior priest or paladin monster slayer and purifier who works for the Iscariot Organization. He lives in Italy, where he operates an orphanage. He normally appears as a calm and collected priest; he works at an orphanage in the manga and OVA and acts very kindly towards the children under his care. During battles, however, he reveals a darker side. Anderson carries an obsession for what appears to be his "crusade," and compulsively quotes passages of the Holy Bible as he speaks. He is extremely determined to achieve his end, however he abhors the methods chosen by Maxwell to put it in motion. In battle, he is merciless and almost unstoppable due to his abilities. He has a habit of hissing during fights, and often loses all control of himself much like Alucard. Despite this, he can stop himself and focus on his mission. He has a measure of self-restraint when innocents are caught in the middle (like tourists) or when someone has caught his admiration (as Integra did). 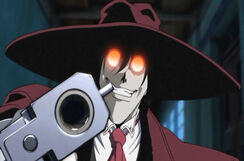 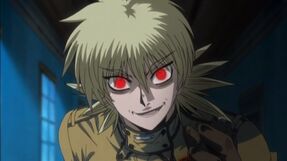 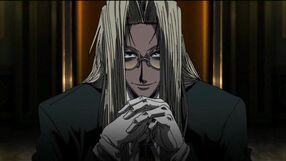 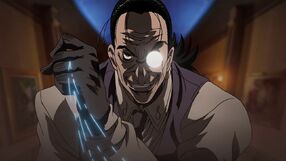 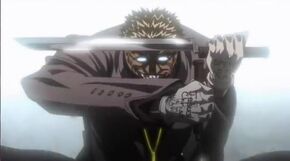 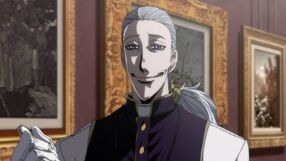 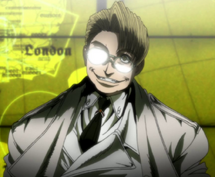 The length of each episode in the series varies between 42-minutes and 68-minutes. Before the series aired on Toonami, the Toonami staff stated that the episodes would not be edited for time and if any edits to content were needed they would be made to fit TV-MA standards.[9]

The series made its North American television premiere on February 11, 2008, on the premium cable channel Starz Edge, as part of the late night Animidnight block.[10] However, there was a scheduling mishap, as episode 4 of the series had not yet been dubbed by the time it was scheduled to air on February 18, 2007.[11] The first 8 episodes of Hellsing Ultimate aired in the United States on Adult Swim's Toonami block from September 13, 2014[1] to November 8, 2014.[2] The last two episodes were not aired as part of the show's initial run due to Toonami unknowingly not having the broadcast rights, and were instead aired as part of Toonami Month of Movies: December 2014 on December 6th and 13th.[3]

Hellsing Ultimate premiered on Adult Swim's Toonami programming block on September 13, 2014 at 3:00 AM, replacing Naruto and Black Lagoon.[1] Two weeks later, on September 27, 2014, the series was pre-empted by the Beware The Batman Blowout marathon at the last minute because Beware the Batman was being written off by Cartoon Network and would be unable to air again after that weekend. The following week Hellsing Ultimate moved an hour earlier and began airing at 2:00 AM on October 2, 2014. It remained in the 2:00 AM time slot through November 8, 2014, and was replaced in the lineup the following week by InuYasha: The Final Act and reruns of Bleach. The series was pulled from the lineup after episode 8 due to Toonami discovering that they did not have the rights to episodes 9 and 10.[2] The remaining two episodes eventually made their Toonami premiere from December 6-13, 2014, at 12:00 AM, as part of Toonami's month of movies.[3]