5:30 PM
Hot Wheels: World Race is a computer-animated, feature-length made-for-TV movie based on the Hot Wheels television series and toy line made by Mattel. The movie was produced by Mainframe Entertainment out of Vancouver, British Columbia, Canada, which also produced the Toonami series ReBoot. The film was distributed on DVD by Family Home Entertainment and distributed on TV by Warner Bros. Television.

World Race premiered on Cartoon Network on July 12, 2003 and was released on VHS and DVD on December 2, 2003. A video game based on the movie was also released in 2003. The movie is a prequel to the Hot Wheels: AcceleRacers series of movies.

After attaining his drivers licence on his 16th birthday, naive-teenager Vert Wheeler discovers the Deora II Hot Wheels car. The door on the front of the car opens, and a monitor shows a recording of a mysterious man named Dr. Peter Tezla, inviting him to a competition called the World Race: a contest between seasoned professionals and talented drivers. Driving to a secret location in the Californian desert, the drivers are informed of the race along an interdimensional racetrack called "Highway 35", created by extraterrestrial beings called Accelerons. At the end of the race is the Wheel of Power. Tezla himself tried to retrieve it himself remotely with little success. His plan is to use the drivers, with their unique driving abilities, to retrieve the wheel on his behalf. To enter the Highway, each driver must be doing 300mph (with the help of an enhanced Nitrous system called Nitrox2) at specific points around the world. During the start, Vert immediately starts a rivalry with Taro Kitano, leader of the Scorchers team; and Lani Tam, a driver of another Wave Rippers car like Vert's.

During the first leg, the drivers are given a test of the type of track Highway 35 is, and the abilities of their cars. One such stunt is a mile-high loop followed by a jump over a lava river. Further on, in a volcano, a mysterious black racer, known as Zed-36, detonates a rigged bottle of Nitrox2 which causes lava to flow over the road. Vert and Taro make it through, but Lani gets caught in the flow and is forced to jump onto a nearby boulder. Taro immediately drives back to help her, eventually followed by Vert. All three of the drivers finish the leg last, with the leader of the Street Breed team, Kurt Wylde, being victorious.

Before the second leg, each leader must make up five teams of seven: the Wave Rippers, Scorchers, Street Breed, Dune Ratz and Roadbeasts. Vert recruits his best friend, Alec Wood, and Kurt's little brother, Markie, after watching him joyride in Kurt's car. During the next leg, a mountainous stage, the leader of the Roadbeasts, Banjee Castillo, discovers a possible shortcut through a jungle valley. The Wave Rippers, curious of the Roadbeasts' decision, follow suit. Things seem to go well for the Roadbeasts until they come across a large wheel obsticle, which they'll need to cross. Whilst crossing it with the Wave Rippers, Zed-36 had a slingshot weapon ready to fire at the wheel, but hesitates after seeing Markie race towards it. After clipping the wheels as he crosses, which causes one of his Nitrox to detact and deonate, the wheels speeds up forcing Vert and Banjee to jump at speed. Meanwhile, both Taro and the leader of the Dune Ratz, Brian Kadeem, reach the portal first, causing a tie.

In the third leg, in a desert, Kadeem spots a disc on top of a pyramid. Believing it to be the Wheel of Power, he takes it, with Zed-36 taking chase. After a minor scuffle, Zed-36's helmet is knocked off and he's revealed to be Kurt Wylde. When he reaches the portal to head back to earth, the disc disintegrated, disappointing Kadeem. Revealing to Vert, he had hoped that he would win the race so he would use the prize money to aid his war-torn people in Africa. Meanwhile, as Kurt leaves the race, he is found by his employers CLYP, lead by a mysterious woman named Gelorum.

As the drivers are about to start the fourth leg of the race, Kurt, with several CLYP racers, make a break for the portal, enticing the other racers to follow. Throughout the ice leg, the CLYP racers try and sabotage the race by blocking the track and dropping mines. When Markie, who was leading detonates a mine which sees himself unconscious hanging over a cliff, Kurt betrays the CLYP drivers, revealed to be drones, to help Markie. However, he continues to race Markie, then Vert, to retrieve the Wheel of Power for Gelorum. He is defeated by Vert, who contunies out of the ice and into a mysterious city, with the Wheel of Power perched ontop of a spire in the city's center.

Vert and the Wave Rippers are named the winners and are awarded $5 million prize money. However, wanting to race on Highway 35 again, storm into Tezla's lab where Tezla had been researching the Wheel. After the Wheel's powers short-circuits the facility's power, Tezla admits the Wheel is too powerful and asked the racers to return it. Meanwhile, Gelorum and her drones surround the facility demanding the wheel. The racers managed to subdue the drones, even bringing Gelorum's chopper down as well, revealing she is a robot as well.

Racing back into the city, the racers, including a defecting Kurt after realizing what Gelorum was, hold off the drones long enough for Vert to replace the Wheel ontop of the spire, lighting up the city. In reflection, the racers name the city "Hot Wheels City". Afterwards, Vert gives his prize money to Kadeem, knowing that the money may not solve their issues, but it helps.

Once returned to Earth, Vert is surprised to see his father at Tezla's facility, and while giving him a drive in Deora II, accidentally activates the Nitrox, accelerating the car to 300mph, and activating the portal to Highway 35. 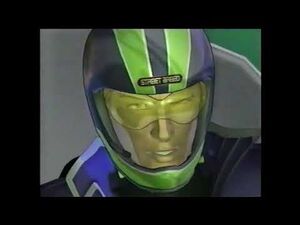 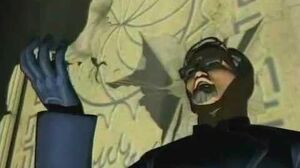