148 (List of Episodes)
Hunter × Hunter is a Japanese anime series based on the manga series of the same name. The anime is directed by Hiroshi Kōjina, scripted by Jun Maekawa, and character designs were created by Takahiro Yoshimatsu. The series, produced by Madhouse, aired in Japan on Nippon Television from October 2011 to September 2014. This series is the second anime incarnation of the Hunter × Hunter story, with the first airing in Japan from 1999 to 2001.

The series has been licensed in the United States by Viz Media.[2] The English dub of the series, created by Bang Zoom! Entertainment, aired on Adult Swim's Toonami programming block from April 16, 2016 to June 29, 2019.[1] The series was rated TV-PG-LV, TV-14-DLSV, and TV-MA-V on Adult Swim.

The series focuses on a young boy named Gon Freecss, who discovers that his father is a world-renowned Hunter, a licensed profession for those who specialize in fantastic pursuits such as locating rare or unidentified animal species, treasure hunting, surveying unexplored enclaves, or hunting down lawless individuals. Despite being abandoned by his father, Gon departs upon a journey to follow in his footsteps, pass the rigorous Hunter Examination, and eventually find his father. Along the way, Gon meets various other Hunters and also encounters the paranormal.

Hunters are licensed, elite members of humanity who are capable of tracking down secret treasures, rare beasts, or even other individuals. To obtain a license one must pass the rigorous annual Hunter Examination run by the Hunter Association, which has a success rate of less than one in a hundred-thousand. A Hunter may be awarded up to three stars; a single star for making "remarkable achievements in a particular field"; they may then be upgraded to two stars for "holding an official position" and mentoring another Hunter up to single star level; and finally upgraded to three stars for "remarkable achievements in multiple fields."

Nen is the ability to control one's own life energy or aura, which is constantly emitted from them whether they know it or not. There are four basic Nen techniques; "Ten" maintains the aura in the body, strengthening it for defense, "Zetsu" shuts the aura flow off, useful for concealing one's presence and relieving fatigue, "Ren" enables a user to produce more Nen, and "Hatsu" is a person's specific use of Nen.

Nen users are classified into six types based on their Hatsu abilities; "Enhancers" strengthen and reinforce their natural physical abilities, "Emitters" project aura out of their bodies, "Manipulators" control objects or living things, "Transmuters" change the type or properties of their aura, "Conjurers" create objects out of their aura, and "Specialists" have unique abilities that do not fall into the previous categories. A Nen user can enter into a Contract, pledging to follow certain limitations, resulting in their abilities being strengthened in relation to how strict they are.

Gon Freecss — the main protagonist of the series, Gon is known for being an athletic, rustic, and friendly boy. Having spent a lot of time in the woods as a child, he gets along very well with animals. Gon is an "Enhancer," who are known for being simple-minded and determined. This determination and talent leads to both potential allies and potential enemies trusting in him and taking his side. He has inhuman senses such as heightened sense of smell and sight, as well as very keen taste. Gon wants to become a Hunter because he wishes to find out the depths of an occupation that would cause a father to choose the profession over being with his own son.

Simultaneously, his flaws lie in his temper and impulsive nature. Gon sometimes fails to think things through and such actions lead to him suffering. His will is stronger than most and he can be very level-headed, but this clear mind can also make him very cold at times. He continually strives to obtain greater power, often becoming exceptionally stronger in his anger. But Gon's anger also leads to extremely reckless tendencies. When his emotions are ignited, Gon becomes irrational and completely oblivious to anything else.

Killua Zoldyck — introduced as a character who seems similar to Gon; cheeky, cheerful, and full of mischievous ideas. He is also one of the most quick-thinking characters in the series and Gon's best friend. He is confident in his own abilities, often being humble about it. But when somebody compliments him, especially Gon, he gets easily embarrassed. However, his ruthlessness and aptitude in killing shows the other side of him — deadly, violent, and bloodthirsty. Having been trained to be an assassin since birth, Killua has been conditioned to possess extreme tolerance for poison, electricity and pain.

Conflicting with Killua's predisposition to kill is his unyielding loyalty to his friends and natural kindness. Often, Killua suffers immensely in attempts to help his friends without a single complaint. Previously, Killua's greatest flaw was his fear of those seemingly more powerful than him (one of whom being his elder brother, Illumi). Kill had been trained as an assassin by his brother to be extremely cautious and that he only engages in combat provided that victory is absolutely certain.

Kurapika — the sole survivor of the Kurta clan, a race with treasured irises that turn scarlet in times of anger or emotional agitation. In his childhood, the entire Kurta clan was eradicated by a band of thieves known as the Phantom Troupe. The Troupe desecrated the bodies of his race by stealing their scarlet eyes following the genocide, thereafter selling them on the black market. He participates in the Hunter Exam alongside Gon in order to become a Blacklist Hunter and gain the power to take vengeance for his race. Kurapika's Nen type is Conjuration. When Kurapika sees the symbol of the Phantom Troupe (a spider), he becomes enraged. It is also known that he hates regular spiders, too.

Leorio Paladiknight — a young adult who befriends Gon during the Hunter Exam. After losing a friend to a curable illness that he could not afford the treatment of, Leorio dedicates himself to becoming a Hunter in order to pay for the costs of medical school to treat the impoverished for free. Though he is often outshone by the genius combat abilities of Gon and Killua, compared to the average man, Leorio is very talented.

Hisoka — a magician, as well as a serial killer. Hisoka is deceitful, playful, and narcissistic by nature; he acts only according to self-interest. Hisoka combines his magic tricks with violence, and delights in battling against those he considers strong. Hisoka takes an interest in Gon and his friends after encountering them during the Hunter Exam; although he initially is posited as an antagonist due to affinity towards murder, he spends much of the series acting as both an adversary and comrade to Gon.

The Phantom Troupe — a gang of thieves that originated in the slum Meteor City. People who live there do not exist in any official records, and the existence of the city itself is known to very few people. The group consists of thirteen members, each with a numbered tattoo of a spider on their body. Those wishing to join the group can do so by killing a member, thereby replacing them. If a vacancy opens due to a member leaving or dying of other causes, the leader of the group, Chrollo Lucilfer, is responsible for finding a replacement member. 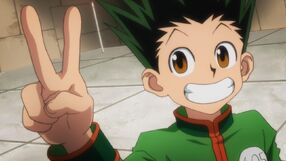 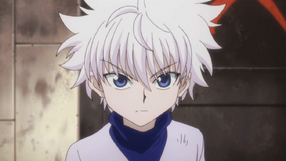 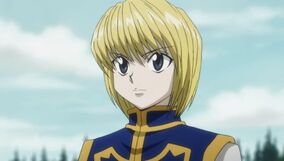 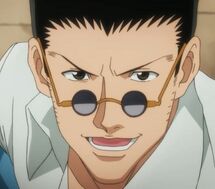 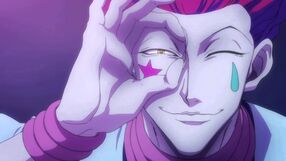 Hunter x Hunter premiered in Japan on Nippon TV from October 2, 2011 to September 23, 2014. It was also simulcast, the same day it aired in Japan, on Crunchyroll.com with English subtitles.[2] Hunter x Hunter aired in the United States on Adult Swim's Toonami programming block from April 16, 2016 to June 29, 2019.