3:00 AM
Is Lupin Still Burning? is a Japanese OVA (Original Video Animation) that was created to celebrate the 50th anniversary of the Lupin the Third manga series. The OVA is essentially a remake of the very first episode of the Lupin the Third anime series, which was titled "Is Lupin Burning?". Jun Kawagoe directed the OVA with the original manga author, Monkey Punch, serving as general director. It was produced by TMS Entertainment.[2] The OVA was bundled with the DVD/Blu-ray first volume of Lupin the Third: Part V as a premium bonus item and released on July 25, 2018.[3]

As Lupin takes part in a race, Fujiko leaves to steal a gold statue, only for it to be revealed as a fake. She is then kidnapped by her archenemy, Mister X, who reveals that he kidnapped her so he could torture her while Lupin is destroyed at the same time. He activates a machine, summoning several robotic arms to appear. Fujiko assumes he wants information out of her, but she has nothing worth knowing, except for someone she has a secret crush on. Mister X says he's not looking for information. He unzips her tight catsuit and presses a button, making the arms tickle her.

She begs Mister X to stop, calling him a maniac, a molester and a sadistic pervert, but he just laughs as Fujiko writhes in ticklish agony as he tells her that Lupin will be destroyed, though she says Lupin is harder to kill before she continues to laugh. However, mid-torture, Fujiko sees Mamo Kyousuke standing above her. As Mamo begins to monologue about Lupin's inevitable death, Fujiko shrieks as Mister X continues to watch the arms tickle her, proclaiming he'll drive her crazy, much to Mamo's annoyance, calling him a childish dolt. As Fujiko suffers helplessly, Mamo uses a machine to teleport Lupin away from the race, much to Fujiko's shock as she continues to suffer.

Lupin expresses confusion as to what happened, realizing that his clothes are different as a man jumps onto his car from a plane and holds him at gunpoint, demanding to hand over some film. As Lupin says he has no film, he reaches into his pocket, discovering he does have film.

Breathing heavily, Fujiko has finally been given a break from the tickling arms. As Mamo begins to explain his plan to the bound thief, Mister X interrupts once more, amplifying the speed of the tickling hands, wanting to drive Fujiko to higher levels of torture. Once the hands tickle her again, Fujiko screams out and begs Mister X to stop, but he refuses as he and Mamo cruelly watch Fujiko as she writhes in agony.

Meanwhile, Lupin contends with the man on his car roof by slamming the brakes, making him fall in the passenger seat. Before he can shoot Lupin, he kicks the attacker out of the car.

While Lupin contends with more men that are trying to assassinate him, Fujiko is still laughing hysterically as the rapid hands tickle her more and more as she begs Mister X to turn off the machine and calls him a loon. As Mister X cackles and tells her to suffer, the arms explode due to a power surge, sparing her from the torture as she mocks Mister X's childish plan of killing her, though he says he has other implements that'll surely destroy her, much to the busty thief's confusion and dread.

As Lupin slowly figures out the weirdness that's been going on, Fujiko is in serious trouble, as several mechanical tongues lower towards her, frightening her. Mister X tells her that the tongues are guided by AI, and will lick her most ticklish parts until she dies. Fujiko calls him crazy, which dooms her as he amps the machine to maximum power. He then watches as the tongues lick her breasts, armpits, neck, butt, and inner thighs. Fujiko then laughs in pain, saying, "That tickles! Stop it! I SAID STOP IT!" 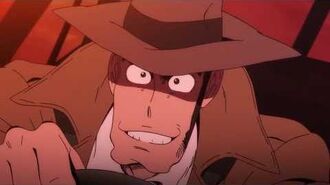