June 5, 2004[3] - July 17, 2004[4]
Jackie Chan Adventures is an American animated series chronicling the adventures of a fictionalized version of action film star Jackie Chan, with many of the episodes containing references to Chan's actual works. The series was produced by Warner Bros, and was nominated for multiple awards during its run. The series aired on The WB's Kids' WB! programming block from September 9, 2000 to July 8, 2005.

During its run on Kids' WB!, the series also aired briefly on Cartoon Network's Toonami programming block in 2004.

Jackie Chan, an amateur archeologist, would prefer to quietly do his work for the local university, but fate has dealt him another hand. Finding a shield containing a talisman, he discovers that it is but the first of a dozen pursued by a criminal organization called "The Dark Hand," led by a man named Valmont and guided by a spirit named Shendu. Jackie, his niece Jade, and their uncle must cooperate with the secret law enforcement organization, Section 13, to oppose this threat.

Jackie Chan — An archaeologist in the series who lives in San Francisco with his uncle. He is forced into many adventures after being spurred on by both his uncle and close friend Captain Black of Section 13 to stop the Dark Hand from performing evil acts with magical artifacts. Later in the series he went up against similar evil forces. Jackie is a skilled martial artist and is very agile, but would prefer not to fight evil forces unless he has no choice.

Jade Chan — Jackie's pre-teen niece (actually his first cousin once removed, since she is his cousin Shen's daughter). She was born and raised in Hong Kong. However, because of her impatient personality, her school performance dropped low, and so she was sent to San Francisco to live with her uncle Jackie. At first, she was not happy about her 'banishment'. Luckily, Jade quickly changed her mind when she saw her uncle fighting off three sinister men and getting kidnapped by secret agents right afterwards. In her effort to rescue her uncle, she became acquainted with Section 13 and joined Jackie and Uncle in their subsequent adventures against the rising dark mystical forces.

Uncle — Called Uncle by everyone even though he is only Jackie's uncle. Uncle owns an antique store (which was originally an 8-track tape store), and became a chi wizard by learning his skills from Master Fong. In addition, he is an accomplished martial artist in his own right, and according to Jackie, Uncle himself was just like Jackie at the same age. Apparently, after he became too old for martial arts, he then studied an unknown fighting style that allowed him to knock out opponents with small jabs to the chest or neck, allowing him to knock out stronger opponents like Captain Black (utilized in "Day of the Dragon").

Captain Black — An old friend of Jackie Chan and the leader of the government organization known as Section 13. When the Dark Hand displayed an interest in ancient artifacts (actually Shendu's talismans), Black recruited his old friend Jackie as a consultant, but soon Jackie, his niece Jade and his Uncle all became personally embroiled in combat against Shendu and other magic-wielding forces. Black assists the characters of the show many times throughout the series, especially against each season's main threat. Originally a non-believer of magic, Captain Black was instantly converted when he saw Shendu in person (which does create some problems when he attempts to gain special permission for missions and equipment from his superiors against supernatural threats).

Tohru — Once the best enforcer for the Dark Hand who led Valmont's Enforcers during most of the talisman hunts on behalf of the dragon sorcerer Shendu. Despite his formidable size and strength, he proved to be no match for Jackie's martial arts skills. His string of defeats displeased Valmont so much that, for the hunt for one of the last talismans (the Pig), he hired the then-freelancer Hak Foo to ensure success of the mission -- a switch which Tohru greatly resented. Eventually (after the 1st season), Tohru changed sides and became Uncle's assistant and apprentice.

Shendu — The main antagonist of the series, Shendu was once the ruler of China, but his subjects rebelled, led by Lo Pei, who turned him into a statue, and then scattered his twelve powers in the form of twelve talismans. Shendu vowed revenge, but was unable to do so for 900 years. He eventually teamed up with the Dark Hand, promising them a lost treasure in exchange for the talismans.

Valmont — The leader of the Dark Hand who hails from the United Kingdom. He is a skillful criminal mastermind and martial arts expert who is able to hold his own against (and even get the better of) Jackie in their personal confrontations. When something goes wrong, he says his catchphrase, "blast!"

Finn — An Irish-American criminal and the brains (or at least the most intelligent) of the Dark Hand enforcers. He is a 1970s fanatic, and sang disco at weddings before joining the Dark Hand. Along with the other two recurring Enforcers and Hak Foo, he worked for Shendu, Valmont, Daolon Wong, Tarakudo and Drago (shortly). He commonly and playfully refers to Valmont as Big-V and Shendu as "Shen-Dude".

Ratso — A nerdy strongman who acts somewhat childish, dimwitted and has a fondness of toys, baseball and grilled cheese sandwiches. He wears a bandage across his nose as a fashion statement, and studied theoretical physics before joining the Enforcers.

Chow — Of Asian descent (most likely Chinese, for in Season 2 episode 3, he is able to read a riddle in Chinese), he is the shortest and youngest member of the group. His trademark is a pair of orange sunglasses, which are actually eyeglasses. He worked at a store called Sunglass Shack, where he was employee of the month 3 times, before joining the Dark Hand.

Shendu's 12 Talismans — The Talismans of "Shendu" are named for the twelve animals of the Chinese zodiac. They each hold a different aspect of Shendu's power. 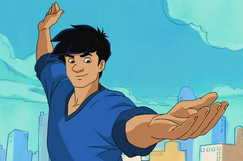 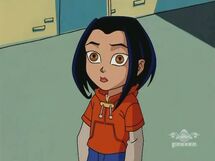 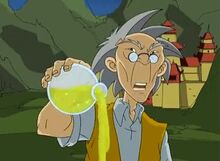 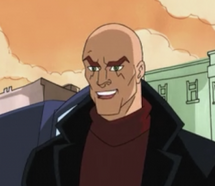 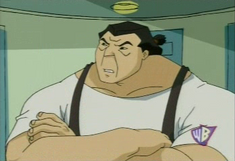 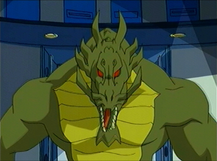 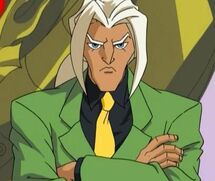 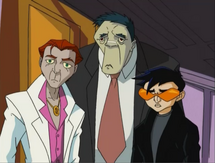 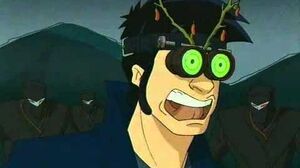 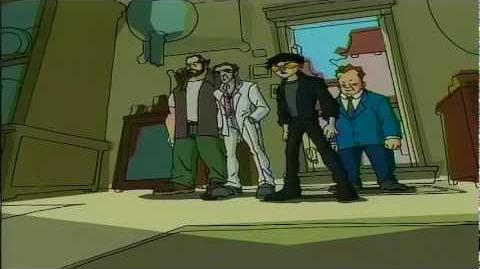 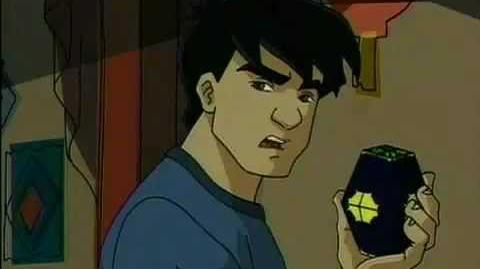 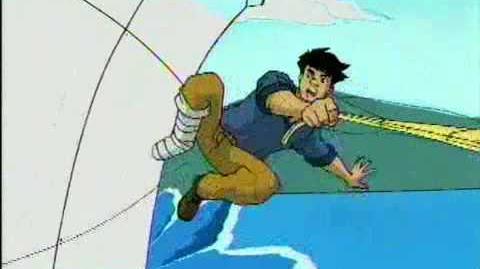 In 2001, Sony Pictures released episodes from the first season on VHS and DVD. However, the two formats differed from one another. Of the four DVDs released, three were select episodes, while the fourth contained the entire first season of 13 episodes. The VHS releases had only three select episodes. These releases have since gone out-of-print, since they had limited pressings. Sony Pictures Home Entertainment released the second season on DVD through Amazon.com in 2012. The entire series can be seen via video-on-demand service at Amazon and iTunes. As of October 2010, the entire series was also made available on the Netflix Instant Streaming service but has since been removed.

Jackie Chan Adventures aired on The WB's Kids' WB programming block from September 9, 2000 to July 8, 2005. During its run, it was also shown on Cartoon Network, including 2 brief runs on Cartoon Network's Toonami block in 2004. Reruns of the series later aired on Toon Disney's Jetix block beginning on September 5, 2006.

Jackie Chan Adventures was added to the Toonami lineup when the block moved to Saturday nights on April 17, 2004. However, the series only lasted two weeks on the block before it was replaced in the lineup by Megas XLR. It returned to the lineup on June 5, 2004 but only remained until July 17th. The series was short lived on Toonami with only 7 episodes aired on the block.