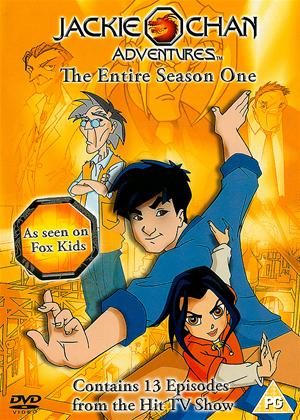 Jackie Chan, an archaeologist, gets caught up in a conflict between government agency Section 13 and a criminal syndicate known as the Dark Hand. Led by Valmont, the Dark Hand is collecting magical talismans to reanimate an ancient dragon-like demon known as Shendu. Jackie also has to keep an eye on his adventurous niece, Jade, who has just flown in from Hong Kong. Jackie Chan, Jade, and his uncle must do all they can to stop evil from obtaining these powerful talismans and must embark on many missions to save the world from evil.

Tohru is reformed and studying as Uncle's apprentice. Shendu has been destroyed and banished to a dimensional prison, where his seven Demonic siblings are not happy with his failure to rescue them. In a last-ditch attempt to save his time and his life, he convinces the demons to allow him out so he can possess somebody, namely Jackie Chan. In order to keep track of where he is, the Demons place a curse on him, forcing his ghost to stay in whatever body he possesses. Shendu goes after Jackie, but accidentally possesses Valmont instead. Through never-ending conflict, Valmont is forced to work along with Shendu to release the Demon Sorcerers from their confinement. This season also introduces the Dark Chi Wizard Daolon Wong.

Daolon Wong and the Dark Hand simultaneously attack Section 13 in search of the Talismans. In an attempt to stop them, Jackie destroys the Talismans, only to have their powers scatter around the world once again, this time residing in host animals. Now Jackie must find the most noble animal of each zodiac symbol before Daolon Wong does so and steals their powers.

In an attempt to free himself from prison, Daolon Wong attempts to once again summon the Shadowkhan, only to awaken Tarakudo, the Lord of all Oni and King of the Shadowkhan. Jackie and company must now locate the nine Oni masks which contain the souls of Tarukudo's generals and therefore each allow the wearer to summon a different tribe of Shadowkhan. This season also introduces Drago, Shendu's son from the future who seeks to fulfill his father's goals by bringing forth the Age of Dragons, as well as Strikemaster Ice and his two cronies DJ Fist and MC Cobra.

In the final season, Drago escapes from Section 13 and ditches Shendu, and it's another race around the world as Jackie must locate seven cursed objects of the immortals that imprisoned Shendu's siblings (Drago's aunts and uncles), which are all imbued with their demonic power, before Drago does.