October 20, 2003[3] - January 1, 2004[4]
Justice League is an American animated television series which premiered on November 17, 2001 on Cartoon Network. The show was produced by Warner Bros. Animation. It is based on the Justice League of America comic series and associated comic book characters from DC Comics. Animator Bruce Timm, who helped adapt both Batman and Superman into successful animated series in the 1990s, took on the challenge of adapting the Justice League comic book and turning it into an animated sequel to his two former animated series.

This new animated series brought all sorts of new characters. Ignoring the sidekicks, pets, and other elements of the earlier Super Friends series, the line-up of this new JLA adaptation was created with two things in mind: to pay tribute to the original line-up of the Justice League of America while also reflecting racial and cultural diversity. Significantly, the well-known superhero Aquaman was left out of the lineup (although he would become a member of the team in Justice League Unlimited), and was replaced by Hawkgirl, the team's second female (along with Wonder Woman). Additionally, John Stewart -- an African American Green Lantern, who had previously worked with the League in the comics -- was used rather than one of the better-known modern-era Green Lanterns: Hal Jordan, Guy Gardner or Kyle Rayner (even though Rayner had appeared as Green Lantern in the Superman animated series). In addition to his African-American heritage, the producer felt Stewart's original abrasive personality would have more dramatic potential. In the second season, Rayner is described as a Lantern in training under Stewart's old mentor, explaining his absence. Both Rayner and Jordan make brief appearances in Justice League Unlimited.

The show met with significant success, partially due to loyal fans already familiar with these incarnations of the characters, and partially from a new generation of viewers. The two-part nature of most episodes led Cartoon Network to choose to air the episodes back-to-back. According to audio commentary on the DVD release of Season 2, the second season finale "Starcrossed" was expected to be the final episode of the series. However, in February 2004, Cartoon Network announced a follow-up series, Justice League Unlimited.

Forces of evil, chaos, and destruction await. Not even Earth's greatest heroes, Superman and Batman, have a chance alone. But with the help of some old friends and new allies; Wonder Woman, Green Lantern, the Flash, Hawkgirl, and the Martian Manhunter. They form a meta-human force to be reckoned with, known as The Justice League.

Most of the characters retained their general comic book origins and continuity, with Wonder Woman being the notable exception. In the Justice League series continuity, the premiere story arc "Secret Origins" revises the plot of Diana's competition against her fellow Amazons to be the ambassador of peace to man's world, and she is referred to as a "rookie" superhero during her first encounter with the League. (Subsequent episodes touched on her attempts to adjust to her new world). In an interview segment on the Season One DVD, Bruce Timm stated that he initially ran into some legal issues in using the Wonder Woman character, but was adamant that she be used in the series. Additionally, the character of The Flash was portrayed as somewhat younger and significantly more brash than his comic book counterpart, taking on a number of personality traits of Plastic Man, who provides a similar comic relief function in the JLA comics. Major changes were also made to the Hawkgirl character. The character of Hawkgirl became romantically involved with the John Stewart Green Lantern as the series progressed. A romantic relationship between Batman and Wonder Woman was also "shown" (hinted at but never "official" unlike Hawkgirl/Green Lantern) by the show's creators, who disliked pairing Wonder Woman with Superman. 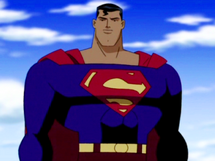 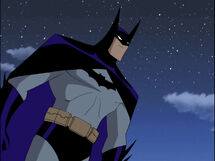 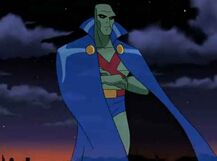 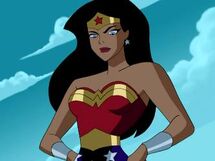 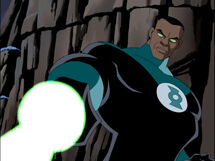 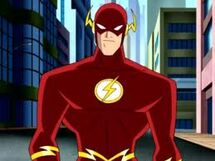 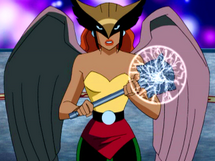 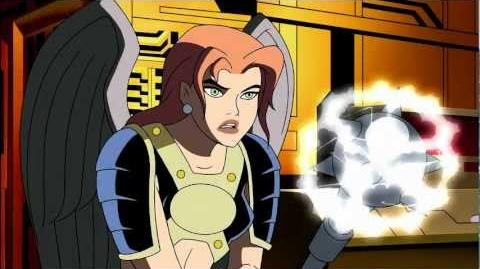 Justice League games created for cartoonnetwork.com from 2002 to 2003 that also appeared on toonami.com:

All series are also part of the DC Animated Universe