07 (List of Episodes)
King Star King is an Adult Swim series, created by JJ Villard and developed by Tommy Blacha, that premiered along with five other pilots as part of the Adult Swim Pilots contest on adultswim.com on July 22, 2013.

The series was subsequently green lit by Adult Swim and all 6 episodes premiered on Adultswim.com on June 15, 2014. The series marked the first original series from Adult Swim to be streamed exclusively online.[1]

King Star King features a punk rock, modern day he-man who falls from the realm of the gods to land as a fry cook in a slummy waffle joint. King Star King must regain his memory to defeat the evil (and adorable) Spring Bunny and rescue his love, the megababe Princess Snow White. Only then will King Star King regain his rightful place in the heavens. 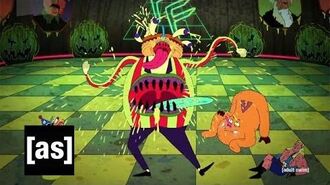 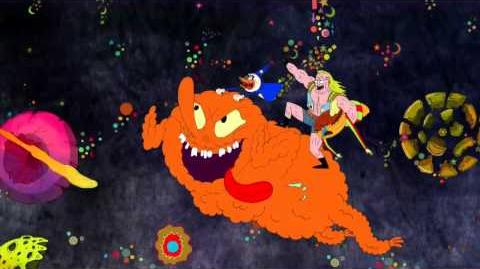 In July 2013, the pilot episode was released online as part of a contest featuring 6 in-development shows for Adult Swim, partnered with KFC, which allowed viewers to vote for their favorite pilot. The two highest-rated and most-watched pilots, King Star King and Übermansion, then went head-to-head during the week of August 12th, with the full episode of the winner debuting on Adult Swim on August 26, 2013. The series lost to Übermansion, which eventually premiered on Crackle as a full-length series on October 8, 2015, retitled SuperMansion.[2][3] After losing the pilot contest, the pilot episode of King Star King made its broadcast premiere on Adult Swim's Toonami programming block during the extra hour added by Daylight Savings on November 2, 2013.

After the 6 episode series premiered on Adultswim.com on June 15, 2014, the series made its broadcast premiere over the next 6 months (July-December), with one episode premiering each month.[1]