Zylonol Studio
The Lost Toonami Comic is an online Toonami comic that was set to be released during Toonami's run on Cartoon Network, however, it ended up not being released and the Toonami crew confirmed that it is not part of the Toonami canon, as TOM does not appear in it.

The Toonami crew found the comic on their computers while working on the current Adult Swim iteration and used the Toonami Tumblr to release the pages of the comic on different days tagged with "comic" between November 24, 2012[1] and February 15, 2013[2]. They also made a zip folder, containing all the pages, available after they had uploaded all of the pages onto Tumblr. The comic was the first installment in what was intended to be a series which would have included TOM and SARA.[1] 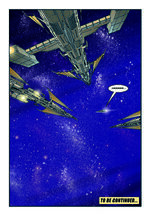