24 (List of Episodes)
Lupin the Third: Part V is the sixth incarnation of TMS Entertainment's long-running anime television adaptation of the Lupin III manga series written by Monkey Punch. The anime adaptation was directed by Yūichirō Yano and written by Ichirō Ōkouchi. The series premiered in Japan on Nippon TV (NTV) from April 3, 2018 to September 18, 2018, and was simulcast with English subtitles by Crunchyroll and also streamed on Hulu.[2][3][4]

Lupin sniffs out a fresh source of income - jacking the digital profits from a pack of dark web drug dealers who distribute narcotics online via an illegal marketplace called Marco Polo. It might be digital cash this time, but there's still a safe – in this case, a fortress-like cloud server in the middle of the ocean – and there's still a key, namely Ami, the hacker who built Marco Polo's payment systems. Lupin's ready to do what it takes to get her to open up, but she's already about to crack – and requests the legendary thief's aid in her escape. Meanwhile, Lupin's foes find that the best way to capture the thief is to turn to social media.

The series is set in modern-day France, and follows the thief Arsène Lupin III, the marksman Daisuke Jigen, the swordsman Goemon Ishikawa XIII, the con artist Fujiko Mine and Inspector Koichi Zenigata. The familiar cast is also joined by the new character Ami Enan, a teenage hacker.

Arsène Lupin III — Lupin is the world's most wanted gentleman thief and grandson of legendary thief Arsène Lupin. While at first glance Lupin appears to be fun-loving, flighty, and perhaps even "goofy", his surface facade overcoats a brilliant imagination and a thorough knowledge of a hundred varying sciences. While he has been arrested and thrown in jail on a number of occasions, he has always managed to break out. His infatuation with women, and Fujiko Mine in particular, is perhaps his biggest weakness, as it often lands him in undesirable situations.

Daisuke Jigen — Jigen is a smooth gunman that accompanies Lupin in his endeavors and heists. Despite Jigen disliking Lupin's lust for women, he remains Lupin's loyal and reliable partner. Despite Jigen's gruff facade, he has an ironic sense of humor and genuinely enjoys participating in capers with Lupin and Goemon. Among Lupin's group, Jigen is the least apprehensive at taking human life. While he considers killing women and children taboo, he is willing to put down any man who offers a threat.

Goemon Ishikawa XIII — is the thirteenth generation of a renegade samurai bloodline, a descendant of the historical figure Ishikawa Goemon. Goemon has an extreme sense of pride in his abilities, and when he cannot accomplish a task, usually feels extreme shame and remorse afterward. Although typically a person of mellow aloofness, Goemon also has a deep admiration for beautiful women. If Goemon has a true weakness, it is that he readily trusts any beautiful woman that seems superficially trustworthy or innocent, often landing him into trouble.

Fujiko Mine — Fujiko is not part of Lupin's gang; however, she often participates in their exploits either as a partner or a competitor. Her principle tactic is to stick with Lupin and company until the plunder is made available then double-cross her colleagues. Frequently, she finds it necessary to betray Lupin to get close to the enemy, then after ingratiating herself into his trust will acquire the loot and escape. Due to her history with the group, Jigen and Goemon are often skeptical about working with her in fear of another betrayal.

Inspector Koichi Zenigata — Zenigata is an incredibly talented, yet often bumbling police officer who has made it his life's goal to capture Lupin III. Zenigata is widely respected among his fellow officers at Interpol as an expert criminal catcher. He was able to discover security flaws and took down countless gangs and criminals long before he met Lupin. However, he has failed to capture Lupin on several occasions and is often outsmarted by the master thief.

Ami Enan — Amlita Enan, aka Underworld, is a brilliant teenage hacker girl. Ami is the daughter of Enzo Bron, CEO of the IT conglomerate Shake Hands Corporation, and a Japanese woman named Yuko Enan. When she was six years old, Ami and a group of other young children were kidnapped by child pornographers to serve as photography models and, eventually, "merchandise" for pedophiles. However, even at her tender age, Ami demonstrated an unusually well-developed aptitude for computer use and programming. When the gangsters noticed this, they kept Ami and used her programming skills for their own profit. One of her major works in that time was the establishment of the dark-web site Marco Polo and its transaction and payment system.

At 14, Ami managed to escape her captors and took refuge in the server bank center known as the Twin Towers. When Lupin III and his associates began investigating Marco Polo in order to fleece them of their ill-begotten wealth, they tracked Ami down. After she became aware of Lupin's thieving skills, she asked him to "steal" her from her squalid living conditions inside the Twin Towers, in exchange for aiding him in robbing Marco Polo.

Albert d'Andrésy — Albert works in the Central Directorate of the Judicial Police, but has higher ambitions of controlling all of France. He used to be a thief and Lupin's rival but gave it up, stating that he had bigger goals. Albert displays a cunning and ruthless personality, as shown when he tricks Lupin into doing his dirty work for him by posing as a dead mentor.

Enzo Bron — Enzo is the founder of the global IT company Shake Hands and inventor of PeopleLog, a program capable of flawlessly identifying people and providing any publicized information about them. 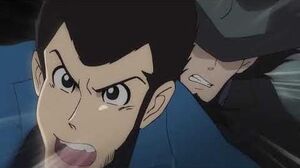 TMS Entertainment USA released the first 12 episodes of Lupin the Third: Part V in the U.S. on iTunes, Google Play, and Amazon Digital on November 18, 2018. The "Season 1" release included the "Is Lupin Still Burning?" ("Lupin wa Ima mo Moeteiru ka?") 50th anniversary episode, which had never been released in the U.S. prior, as an exclusive bonus.[6]