13 (List of Episodes)
Megalo Box is a Japanese anime series created in commemoration of the 50th anniversary of the manga, Ashita no Joe, but features an original story. The series is produced by the studio TMS Entertainment, who also produced the second Ashita no Joe anime series in 1980. The director of the series is Yō Moriyama, who was also in charge of conceptual designs. Writers Katsuhiko Manabe and Kensaku Kojima oversaw and wrote the scripts for the series, with music composed by hip-hop artist Mabanua.[1][2]

The series aired in Japan on TBS from April 6, 2018 to June 29, 2018 and was also simulcast on Crunchyroll. The broadcasting rights of Megalo Box were licensed in North America by Viz Media and an English dub was produced that premiered on Adult Swim's Toonami block from December 8, 2018 to March 23, 2019.[1][2] The series is rated TV-14-LV on Adult Swim.

Staff of the first season of Megalobox announced at Anime NYC 2019 that Megalobox 2 is currently in development.[3]

The series takes place in a futuristic setting where licensed citizens live in a wealthy city while, on the outskirts of this city, there is a slum town where unlicensed citizens live in poverty. Megalo Boxing is a popular sport in this world similar to boxing except the boxers fight while wearing a metal frame which makes their attacks much more lethal. One of these fighters, a man called Junk Dog, participates in fixed boxing matches in an underground ring in order to live, under the guidance of his coach Nanbu. After encountering Yukiko Shirato, the head of the wealthy Shirato Group which oversees the Megalonia tournament, Junk Dog picks a fight with her bodyguard Yūri who is also the top ranked Megalo Boxer. After he is easily defeated by Yuri in a match, Yuri tells Junk Dog to fight him again in Megalonia. In order to be able to fight in Megalonia, Junk Dog would need to reach the top of the official Megalo Box rankings to qualify, as well as a proper citizenship ID to enter the rankings in the first place. After Nanbu persuades the mob boss Fujimaki to forge Junk Dog an ID under the name Joe, the two are given 3 months to achieve their goal of working their way to the top of the Megalo Box rankings in order to have a chance of fighting in Megalonia.

Junk Dog/Joe — Junk Dog is an underground Megalo Boxer from the outskirts of town whose real name is unknown, he is forced to throw fights to earn money for his crooked manager/coach. He initially fights with old gear that is constantly in need of repair. He takes on the name "Joe" when he has a Citizen ID forged in order to enter the Megalonia tournament. He later takes on the ring name "Gearless" Joe as part of a gimmick to rise in the rankings quickly, fighting without Gear against Gear-equipped opponents.

Gansaku Nanbu — Junk Dog's manager, coach, and a gambler with a drinking problem who keeps making Junk Dog throw fights, even though, deep down, he believes in his abilities.

Yukiko Shirato — The head of the Shirato Group, who oversees the Megalonia tournament, and the boss of Yūri who acts as her bodyguard.

Yūri — Yukiko's bodyguard and the Megalo Boxing champion. He seeks out Junk Dog after he insults Yukiko, meeting him in the underground ring. Yūri easily defeats Junk Dog before telling him to work his way up in Megalonia if he wants to fight him again. Yūri is equipped with a unique prototype "integrated" Gear, which is surgically grafted directly to his arms. 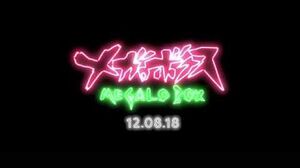 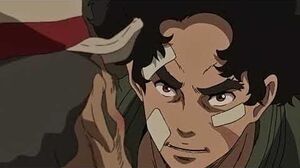 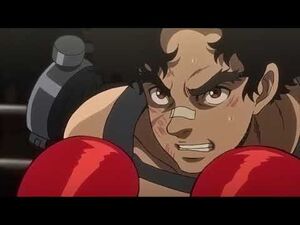 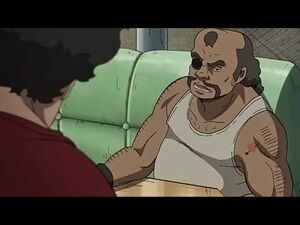 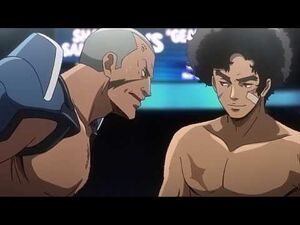 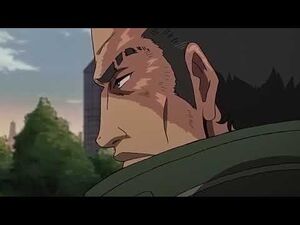 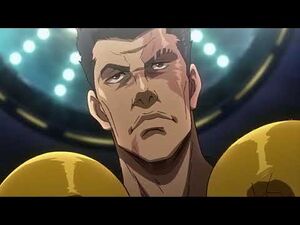 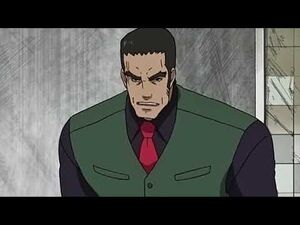 Megalo Box premiered on Adult Swim's Toonami block on December 8, 2018 at 12:00 AM.[1][2] On January 5, 2019, the series was moved to the 1:00 AM time slot. On March 16, 2019, episode 6 of Sword Art Online: Alicization began to air on Toonami in its usual time slot of 12:30 AM. However, shortly thereafter the broadcast began to experience technical difficulties. In response, Adult Swim immediately went to commercial to try to fix the issue. When Alicization resumed, it experienced the same problem, so eventually the episode was skipped and episode 12 of Megalo Box began airing ahead of schedule. However, in order to get back on schedule, instead of letting the entire episode of Megalo Box play out, it instead started over at its regular start time of 1:00 AM. On March 23, 2019, the series completed its run on Toonami and was removed from the lineup.