26 (List of Episodes)
Megas XLR is an American animated television series, created by Jody Schaeffer and George Krstic and produced by Cartoon Network Studios, that aired on Cartoon Network.

While playing video games, Schaeffer and Krstic came up with an idea of making an animated series in which the main character would use his video gaming skills to pilot a giant robot. Much of the series is inspired by Japanese mecha anime which the two grew up watching, with the animation being inspired by both anime and Western animation. The humor often pays homage or mocks anime conventions.

Originally entitled LowBrow: Test Drive, the pilot episode was shown during Cartoon Network's 2002 contest (Cartoon Cartoon Weekend Summerfest) to determine which cartoon would become a new Cartoon Cartoon, it was the most popular among viewers and was picked up by the network to be made into a full series.

After being delayed from its original debut in December 2003, Megas XLR finally premiered on the Toonami block on May 1, 2004 at 9:00 PM.[1] Megas is now considered a cult classic but unfortunately the ratings of the series did not show this popularity and it was cancelled in 2005. The series was then written off by Cartoon Network and it hasn't appeared on American TV since.

A similar situation occurred with the Toonami original series IGPX, but it was able to be un-written off due to its very complex production deal. However the same rules do not apply for Megas, so they cannot use the same method to reacquire the series.

In the distant future (specifically sometime in the 31st century, between 3035-3037), Earth is fighting a losing war with an alien race known as "the Glorft". In order to save the planet, the human resistance steals a prototype giant robot from the Glorft and modifies it, renaming it MEGAS (Mechanized Earth Guard Attack System). The idea is to use a time-traveling device called a time drive to send MEGAS and its pilot, Kiva, two years into the past to the Battle of the Last Stand, which was the last major offensive fought by humanity against the Glorft. Humanity lost that battle, but the members of the resistance, particularly Kiva, believe that MEGAS can tip the scales and hand the Glorft a decisive defeat.

Before the plan can be executed, however, an attack by the Glorft forces the human resistance to send MEGAS back in time before proper preparations are made, but the time drive is accidentally damaged in the attack and, as a result, sends the now-crippled MEGAS (its head was blown off in the attack) all the way back to the 1930s. MEGAS languishes in a New Jersey junkyard until it ends up in the hands of a slacker mechanic, Coop, and his slacker best friend, Jamie, around the year 2004. Coop turns MEGAS into a hot rod project by repainting it with a flaming paint job and replacing its head with a classic muscle car and naming it XLR, for eXtra Large Robot.

Kiva goes back in time to retrieve MEGAS, and when she finds she is unable to pilot it because of Coop's modifications, she begrudgingly decides to train Coop, who is now the only person who can pilot it. However, the Glorft have followed her through time and, much to Kiva's chagrin, it is now up to Coop to defend Earth from the Glorft and other various threats; if he does not accidentally end up destroying it first that is.

Harold "Coop" Cooplowski — The pilot of MEGAS and the main protagonist, Coop is overweight and has an insatiable appetite. Coop's general appearance seems to be quite typical Jersey native. He has a short, spiky blown-back crew cut and a carefully shorn chin strap. He is typically seen wearing a sleeve torn red-plaid flannel shirt, with a white #12(Joe Namath) t-shirt underneath. It is implied that Coop is unemployed and still lives at home with his mother, occupying the basement and the garage. Due to years of playing video games of all types, he is an extremely capable pilot. His main fighting techniques are derived from numerous wrestling, dancing, racing, and other combat games. He's not exactly the brightest person around, but does occasionally exhibit some tactical ploy, as well as some considerable computer and mechanical engineering skills; seen as he managed to adapt his car to serve as jury-rigged control center for the super-advanced MEGAS, as well installing a number of secondary modifications. Although Coop can be a clever robotic fighter, he prefers the gung-ho approach of smashing now and asking questions later, especially if something gets in the way of what he wants. Most, if not all, of his amazing heroics are accidental, and he usually ends up destroying more than he protects. Even though he spends a majority of his time in MEGAS, Coop is actually quite strong as depicted by his demonstrations of raw strength, such as being able to punch a car window without flinching or using a monkey-wrench to smash a null-distortion missile off of MEGAS. Despite Coop's strength and piloting skill, he tends to avoid physical confrontation, only doing so when he is angered or wants to have a little fun. Along with his keen piloting and physical prowess, Coop also exhibits exceptional technical driving skills.

Jamie — Coop's best friend since childhood, Jamie is a skinny, smart-aleck slacker. He wears a woolen blue beanie, tight blue-jeans, and a black leather jacket with a green hoodie underneath. Compared to Kiva and Coop, his contributions are minimal, and are usually limited to comic relief. Really, Jamie is just along for the ride, often enjoying the thrill of Coop's misguided adventures (when Jamie and Kiva were trapped in a Glorft prison, he admitted to Kiva, "I don't have any other friends, okay? You take Coop on this save the world gig and I'm left with nothing..."). As the series progresses, he builds a stable friendship with Kiva (even becoming lovers after Coop won the Galactic Combat Championship Federation, breaking off and becoming evil; as a result Kiva followed to stay close to MEGAS, but became evil herself as Coop's second in command, breaking the relations with Jamie. This story line breaks off after past Coop defeats his evil, future self). He frequently makes passes at pretty girls, often imagining himself being adored by numerous attractive women, but often has little to no success. Personality wise, Jamie is very cowardly and often runs at the first sign of danger, only showing bravery when he or his friends are gravely threatened.

Kiva — Kiva is a military pilot and engineer who traveled back in time from over a thousand years in the future, around the year 3037. Kiva re-designed a captured Glorft prototype and was originally meant to be the pilot of MEGAS, but she can no longer pilot it due to Coop's modifications. She also finds herself stuck in the present time because Coop smashed the time drive. Instead of driving MEGAS herself, she constantly tries to train Coop. She has a no-nonsense personality, but adopts a small sense of humor as the series progresses. Kiva repeatedly demonstrates high skills in both robotic and hand-to-hand combat, usually being the "muscle" of the trio. She is always seen wearing her original futuristic pilot uniform, of which the shoulder pads and leg-guards are made of "tritanium refractive armor". Kiva is also very knowledgeable, tough, and fearless. Despite her many skills, Kiva is usually confined to the back seat, operating a wrist-operated holographic panel to give Coop advice on opponent's weaknesses, navigational directions, or feedback on MEGAS' system status. She can be viewed as Coop's co-pilot. By the end of the series, Kiva and Jamie get along quite well, considering both him and Coop her best friends.

Goat — Between catching a tan on a scrap hill and relaxing in his favorite lawn chair, Goat is the owner and operator of the junkyard in which Coop found MEGAS. Goat dreams of finding a robot of his own, wanting to "call her Darlene". Like Jamie, he tries to hit on girls (usually Kiva) and falls just a bit short. He occasionally accompanies the trio on there escapades.

Gorrath — The primary antagonist of the series. Warmaster Gorrath is the head of the warlike Glorft cyborg-cephalopod, alien race. Gorrath followed Kiva and led his army back in time to the past to try and retrieve MEGAS (or as he calls it, the Avatar prototype). Because of his rash actions, he is trapped in the past just like Kiva, unless he captures the time drive within MEGAS. He hates Coop and often launches attacks to try to kill him and reclaim MEGAS, and also conquer the Earth, but always fails in some way or another, usually because of sheer luck on Coop's part. 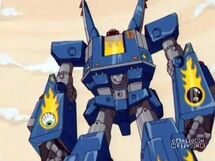 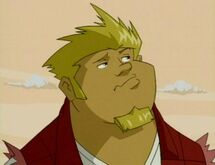 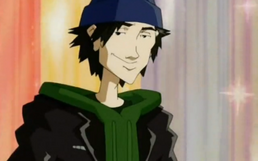 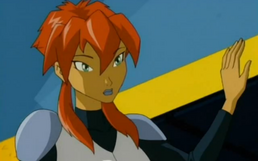 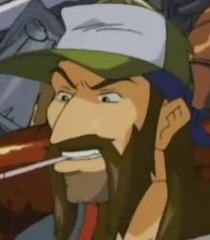 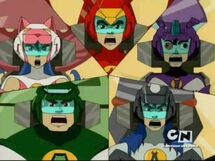 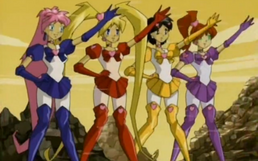 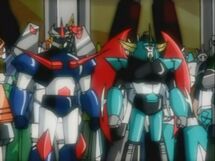 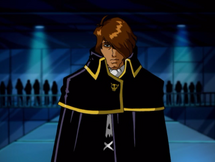 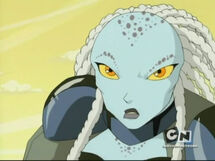 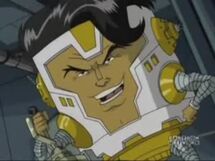 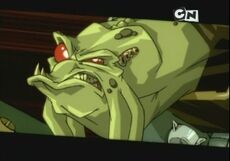 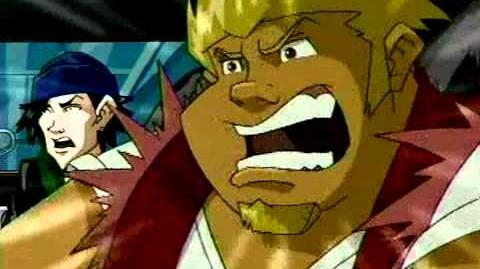 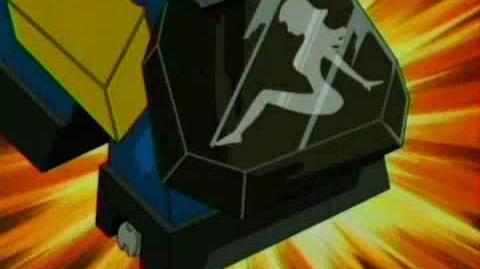 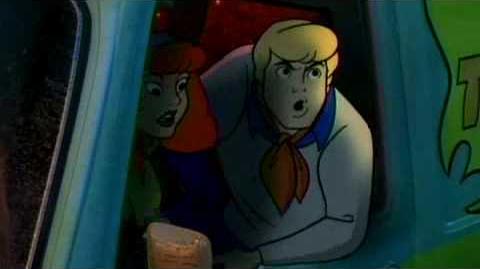 The entire series is available from the iTunes Store and on Xbox Live. The series has never been released on DVD and, after talking with Cartoon Network about reacquiring the rights to the series, the creators have stated, on the Toonami Faithful podcast, that it is very improbable that they would be able to do so.

LowBrow: Test Drive, the pilot episode of Megas XLR, was entered into Cartoon Network's "Cartoon Cartoon Weekend Summerfest" in August 2002 and was subsequently picked up by the network to be made into a full series. However, the premiere of the series was delayed from its projected date in December 2003, and did not make its premiere until May 1, 2004 at 9:00 PM on the Toonami programming block. The series aired for two seasons on Cartoon Network's Toonami block from May 1, 2004 until March 19, 2005, when, due to low ratings, it was cancelled by the network. The series then continued to air in reruns on Cartoon Network until June 24, 2006. The series also aired in the UK and Canada from 2004 to 2005.