December 15, 2018[3] - February 9, 2019
Mobile Suit Gundam: Iron-Blooded Orphans is a 2015 Japanese anime series and the fourteenth incarnation of the Gundam franchise. The series is directed by Tatsuyuki Nagai and written by Mari Okada. The first season aired in Japan on MBS and other JNN stations from October 4, 2015 to March 27, 2016. A second season aired from October 2, 2016 to April 2, 2017.[4] Sunrise acquired the North American rights to the series in 2016 and contracted Bang Zoom! Entertainment to produce the English dub.[5]

The year is Post Disaster 323. More than 300 years after a great war between Earth and Outer colonies known as the "Calamity War", Mars has been successfully terraformed and colonized by humans. However even with the technological advancements, the humans on Mars crave freedom from the government of Earth and seek to improve their livelihoods. Furthermore, while most of Mars' nations have received autonomy, the planet is virtually dependent on Earth for economic development with many living in impoverished conditions. A young orphan named Mikazuki Augus is part of a group of children who work for the civilian security company Chryse Guard Security (CGS), entrusted with the safety of the Martian Princess Kudelia Aina Bernstein, who has plans for her nation of Chryse to secure independence from Earth. One day, the group is attacked by the Earth Military organization Gjallarhorn, which aims to stop the Martian independence movement. During the attack, the leader of the children and the Third Army Division within CGS, Orga Itsuka, decides to rebel against the adults and higher-ups who had escaped and left the children and foot-soldiers to remain and fight as decoys. As all hope seems lost, Mika enters the battle, piloting a hastily repaired mobile suit: the legendary Gundam Barbatos.

Mikazuki Augus — An orphan child soldier working for CGS's Third Army Division and primary pilot of the ASW-G-08 Gundam Barbatos. Often known by the nickname "Mika," he and Orga were childhood friends who would not hesitate to sacrifice their lives for each other or their comrades. Though he has poor social skills and is uninterested in women, he excels in piloting and combat and focuses solely on developing his skills while protecting his friends. He is utterly ruthless against his enemies and is also shown to sometimes lose himself in anger. In some cases, he will even enter a berserker-like state if well enraged and can only be snapped out by those close to him. Like other members of the Third Army Division, he received man-machine interface implants known as the Alaya-Vijnana System, also known as "Whiskers," on his spine to improve his spatial skills and reactions in the cockpit while piloting.

Orga Itsuka — Leader of Tekkadan and former leader of CGS's Third Army Division, the disposable child soldiers of the CGS. He is a soldier with great leadership skills and places great emphasis on an honorable reputation and on survival. He cares for his comrades, especially his friend Mikazuki. Dating back to their childhood, their brotherly bond is even stronger than that between most siblings. Angered at Third Army being used as unwilling sacrificial decoys, Orga leads a mutiny that expels majority of the group. He then renames the division "Tekkadan" and promises to complete the group's original mission of escorting Kudelia Aina Bernstein to Earth. Orga struggles with the responsibility of being the de facto leader and patriarch of his surrogate "family" in Tekkadan. On the other hand, he is determined to do what is best for them and hopes to give his comrades a place to call home once their mission is complete.

Biscuit Griffon — The informant and strategist of CGS's Third Army Division. Biscuit joined CGS to support his family, having grown up in a slum in the Dort colonies. After his parents' death in an accident, he and his sisters are taken in by their grandmother on Mars while their older brother is taken in by a company executive due to his intelligence. Biscuit is a loyal staff officer who often works with Orga. Unlike most of the members of the Third Army Division, he is literate and enjoys reading. Biscuit often acts as a liaison between CGS and civilians, as he is generally more social and personable than his comrades. He dreams of being able to secure enough pay to send his sisters to school so they can improve their livelihoods.

Eugene Sevenstark — Former leader of CGS's Third Army Division until Orga enlisted and took over the group. Because of this, Eugene and Orga are frequently at odds with each other. However, they share mutual respect and Orga often tasks him with taking command of the Isaribi in heavy combat.

Norba Shino — A large but cheerful CGS officer in the Third Army Division who specializes in hand-to-hand combat and infantry tactics.

Akihiro Altland — Leader of CGS' "Human Debris", a term for trafficked men, usually young boys, who are enslaved and forced to work for various groups in the Outer Sphere. Though he and his group are technically "freed" by Orga after Tekkadan's mutiny, the Human Debris remain with the group out of gratitude and the fact that it would be almost impossible for them to get regular jobs. He has somewhat of a friendly rivalry with Mikazuki and is often seen training with Lafter and Azee.

Atra Mixta — A shy grocery worker in Chryse who is childhood friends with Mikazuki. When Tekkadan prepares to leave Mars and undergo their mission, Atra quits her job at the grocery store and offers her services to the group as a cook.

Dante Mogro — A member of CGS' "Human Debris," he specializes in electronic warfare.

Takaki Uno — A boy in the CGS who often acts as a supply courier and messenger.

Ride Mass — A sharped tongued boy within the CGS who cares for his friends.

Yamagi Gilmerton — A boy in the CGS who specializes in equipment maintenance.

Nadi Yukinojo Kassapa — A skilled CGS mechanic who is usually referred to as "ossan" by the orphans. His legs are prosthetic, and he notes that Earth-born people look down on people like him and those with Alaya-Vijnana implants due to Gjallarhorn propaganda against the technology developed during the Calamity War. As the only adult to remain with CGS, he often fills the role of a father figure, dispensing advice to the boys.

Dexter Culastor — The accounting manager of CGS. He is spared during Third Corps' mutiny and was one of the first to opt to leave. However, he was held back for the time being so that he can help issue severance pay to First Corps members who opt to leave the service and to take care of financial matters for the company.

Kudelia Aina Bernstein — A young aristocrat seeking independence from Earth for the Martian city of Chryse. More specifically, she seeks to end the cap on the prices of Mars' industrial and agricultural products such as maize, half-metals, and rare earths to enable Mars provide for its people economically. She had previously convened in a gathering, known as the "Noachis July Assembly," that ignited Mars' independence movement. Kudelia enlists the help of CGS as escorts to Earth, witnessing firsthand the reality of Mars' situation and the horrors of battle when Gjallarhorn attacks CGS's headquarters in an attempt to assassinate her.

Fumitan Admoss — Kudelia's loyal servant since childhood. Due to her technical skills, she offers her services to Tekkadan as a communications officer. 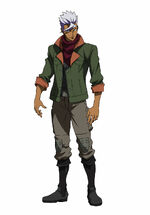 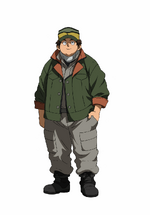