October 1, 2001[2] - November 2, 2001
Mobile Suit Gundam: The 08th MS Team is an original video animation (OVA) series in the Gundam franchise, produced by Sunrise. Released from January 25, 1996 to April 25, 1999, the series was directed by Takeyuki Kanda until his death in July 1996, causing production to stall. GONZO's Umanosuke Iida then took over production for the rest of the series. 08th MS Team is the first Gundam series to show the war from the viewpoint of the average soldier. Bandai licensed the series for North American release in 2000.[3]

The English dub of 08th MS Team premiered in the United States on Toonami's Midnight Run programming block on July 23, 2001, edited for content. It was the first series to premiere on the Midnight Run before the daytime block.[1] The series later aired on the weekday afternoon Toonami block beginning on October 1, 2001.[2]

The series is set in Universal Century 0079 in the jungles of Southeast Asia and details the exploits of an Earth Federation ground unit during the One Year War, specifically before the original 1979 Mobile Suit Gundam anime series, and into the final weeks of the war.

The Earth Federation and the Principality of Zeon are fighting a brutal guerrilla war for control of the area and its resources. Zeon’s best hope for victory in the region rests with an experimental mobile armor and its pilot, Aina Sahalin. Meanwhile, the Earth Federal Army, receive reinforcements in the form of Ensign Shiro Amada, newly named commander of the 08th MS Team. Aina and Shiro know each other from a mutual rescue in space, but when Shiro discovers that Aina is in fact the pilot of the Zeon mobile armor he is arrested for treason. The Federation offers Shiro one chance at redemption: He must take the 08th MS Team deep into Zeon held territory to find Zeon’s hidden base. With the Zeon backed into a corner, and the Federation dependent on Shiro and his team for victory, the star crossed lovers must decide where their true allegiances lie: with each other, or with their respective sides.

Shiro Amada — Shiro is the new commander of the Earth Federation's 08th Mobile Suit Team stationed in Southeast Asia. Before he assumes this position, however, he befriends a Zeon pilot named Aina Sahalin up in space and unbeknownst to both of them their fates become intertwined.

Aina Sahalin — A member of a noble family back in the Zeon homeland, Aina is the senior test pilot of a new mobile armor program led by her brother Ginias. While piloting her prototype Zaku amidst a debris field in space, she meets Shiro Amada and forms a bond with him even though they are on opposite sides of the war. Circumstances result in the two of them meeting again later in the series.

MCPO Karen Joshua — The 08th MS Team's longest-serving mobile suit pilot, Karen is initially underwhelmed when Shiro takes over the team with her as second-in-command. As a former medical student and the widow of a military doctor, Karen can double as a field medic in cases of emergency.

CPO Terry Sanders Jr. — The other veteran member of the 08th MS Team at the start of the series, Sanders has had a mean streak of bad luck: every team he has been assigned to has been destroyed during their third mission together. Since he is the sole survivor, this earns him the unfortunate nickname of "Sanders the Reaper"

PO3 Eledore Massis — A veteran member of the 08th MS Team and driver of the team's support hovertruck. He's not very brave and openly admits he's not cut out to be a soldier, but puts himself in danger when he has to, especially when Karen is involved.

Cpl. Michel Ninorich — Joining the 08th MS Team at the same time as Shiro, Michel is Eledore's partner in the support hovertruck, serving as navigator and gunner. Between battles, he writes letters to his girlfriend BB, who still lives in the space colonies.

Kiki Rosita — the daughter of an anti-Zeon guerrilla resistance leader. She encounters Shiro just before he is taken captive by the guerrillas and is infatuated with him. When Shiro finally convinces them to assist the 08th MS Team, Kiki follows him, coordinating support and providing communication between the MS unit and the resistance.

Rear Admiral Ginias Sahalin — Aina Sahalin's elder brother, Ginias is a Zeon officer assigned by the Zeon leadership to build a mobile weapon powerful enough to destroy the Earth Federation Forces military headquarters of Jaburo. Although Ginias is quite brilliant and a kind military superior, he also suffers from an unknown illness.

Capt. Norris Packard — An ace pilot assigned to Zeon forces in Southeast Asia as an observer, Norris is later stationed at Ginias Sahalin's secret base and sees Aina Sahalin work on the Apsalus mobile armor program. He dies in Episode 11 fighting Federation troops laying siege to the base.

Rear Adm. Yuri Kellerne — A family friend of the Sahalins, Kellarny leads a Zeon military division in Europe. Although he acts gruff and ill-mannered around the Sahalins, he is depicted as an honorable soldier who always looks after his men. After the Odessa base falls to the Federation, Yuri leads the survivors of his division towards Ginias' base, hoping to find any launch vehicles. Ginias kills him as he tries to get in.

Kojima — The commander of the 08th MS Team's parent unit, the Kojima Battalion, Kojima is a typical by-the-book officer who does whatever he is told by his superiors. Towards the end, however, he is visibly shaken by the brutal tactics of Captain Isan Ryer and defies him, thinking that enough good people have already died. 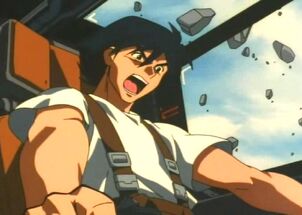 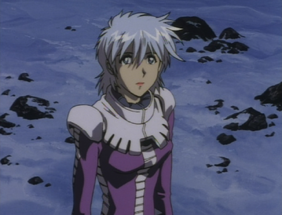 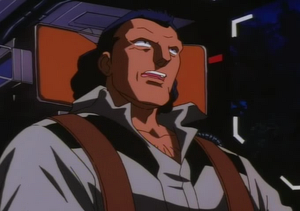 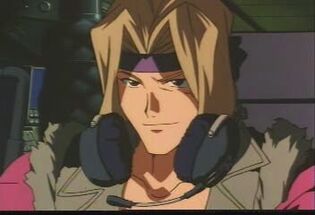 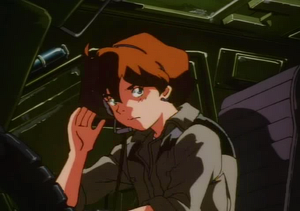 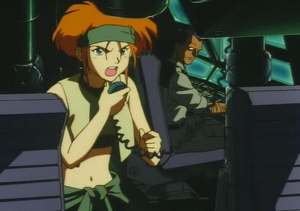 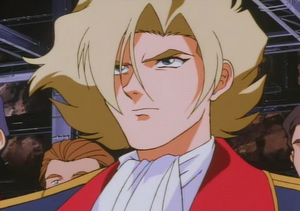 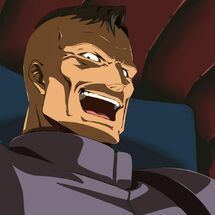 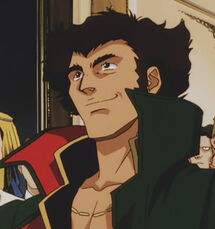 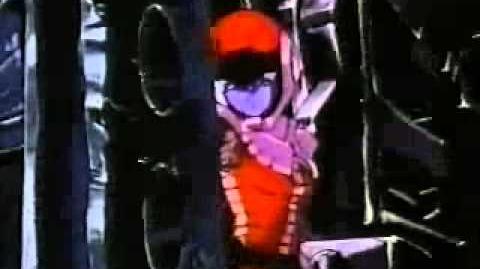 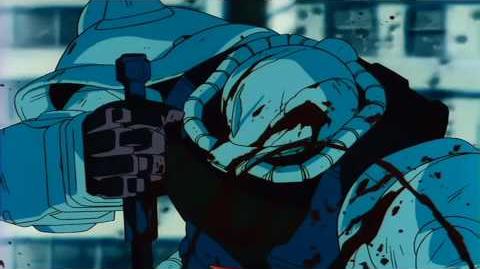 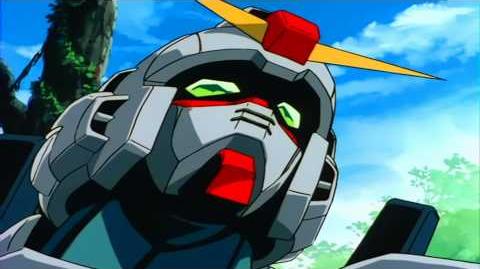 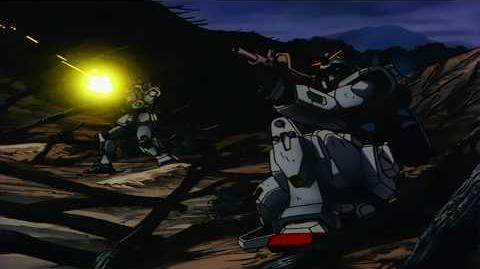 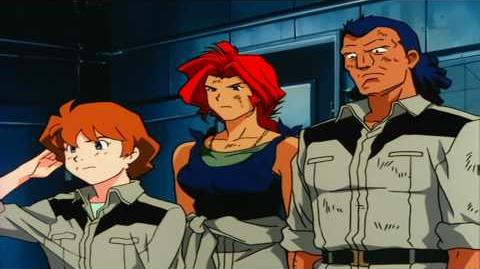 The series premiered in the United States on Cartoon Network, exclusively on the late night Toonami programming block the Midnight Run, from July 23, 2001 to September 7, 2001.[1] The series also received a run on the weekday afternoon Toonami block from October 1, 2001 to November 2, 2001.[2]

The series aired on both blocks edited for content even though the Midnight Run previously aired uncut episodes of Gundam Wing. Episodes were edited to Cartoon Network standards at the time and most explicit language, nudity, and gore was edited out of the series.[5] Only the first 11 episodes aired on Toonami, the final episode was never aired on the block. In addition, some scenes from the movie Miller's Report were edited into episode 8 ("Duty and Ideals") specifically for Toonami.