Nausicaa of the Valley of the Wind

Nausicaä of the Valley of the Wind

7:30 PM
Nausicaä of the Valley of the Wind is a 1984 Japanese animated post-apocalyptic fantasy adventure film written and directed by Hayao Miyazaki, based on his own 1982 manga of the same name. Isao Takahata produced the film for Tokuma Shoten and Hakuhodo. Top Craft animated the film and Joe Hisaishi provided the music. Among its numerous awards, it won the Animage Anime Grand Prix prize in 1984.

The film was released in Japan on March 11, 1984 and was presented by the World Wide Fund for Nature. While created before Studio Ghibli was founded, the film is considered to be the beginning of the studio and is often included as part of the Studio's works, including the Studio Ghibli Collection DVDs and Blu-rays.

In the 1980s, New World Pictures produced an English-dubbed version of the film, titled "Warriors of the Wind", and it was released theatrically in North America, shown on HBO and released on VHS. The voice actors and actresses were not informed of the film's plotline and the film was heavily edited to make it a children-oriented film. Consequently, part of the film's narrative meaning was lost; some of the environmentalist themes were diluted as was the main subplot of the Ohmu, altered to turn them into aggressive enemies. Most of the characters were renamed (for example, Nausicaä became "Princess Zandra"). The cover for the VHS release featured a cadre of male characters who are not in the film, riding the resurrected God Warrior—including a still-living Warrior shown briefly in a flashback. It was released around the world under various titles, such as Sternenkrieger (literally "Star Warriors") in Germany. An uncredited Susan Davis provided the voice of the title role, and Asbel, dubbed "Prince Milo" in this version, was voiced by Cam Clarke.

Dissatisfied with Warriors of the Wind, Miyazaki suggested that people should put it "out of their minds." Studio Ghibli and Miyazaki have asked fans to forget its existence and later adopted a strict "no-edits" clause for future foreign releases of its films.

An uncut and re-dubbed version of Nausicaä was released in the U.S. on DVD by Buena Vista Home Entertainment on February 22, 2005. This DVD also includes the Japanese audio track with English subtitles. The film was released on Blu-ray in the United States and Canada on March 8, 2011 by Walt Disney Studios Home Entertainment.

One thousand years have passed since the Seven Days of Fire, an apocalyptic war that destroyed human civilization and gave birth to the vast Toxic Jungle, a forest swarming with giant mutant insects in which everything is lethal to humans. Scattered settlements exist wherever the Toxic Jungle relents. The Valley of the Wind is one such settlement. The Valley's settlers have a prophecy stating that a warrior "clad in blue and surrounded by fields of gold" will one day reunite man and nature.

Nausicaä, the agile, cheerful and peace-loving princess of the Valley of the Wind, has managed to befriend the Toxic Jungle. She explores the Jungle and communicates with its creatures, including the gigantic, armored trilobite-like creatures called Ohmu. She often travels on a compact jet-powered glider in order to find out about the origins of the Toxic Jungle, understand its nature, and even find a cure for both humans and the world.

One night, during a visit by the Valley's swordsmaster, Lord Yupa, a large fixed-wing cargo aircraft from the kingdom of Tolmekia crashes in the Valley. Nausicaä tries to rescue an onboard passenger, the wounded Princess Lastelle of Pejite, who pleads with Nausicaä to destroy the cargo before dying. The cargo is an embryo of a Giant Warrior, lethal genetically engineered bioweapons that caused the Seven Days of Fire. The invading Tolmekians seized the embryo and Lastelle. The Tolmekian plane, however, was attacked by mutant insects before it crashed. One of the insects then emerges unscathed from the wreckage and seems poised to attack the frightened villagers, but Nausicaä uses a small bullroarer to create a high-pitched tune that helps calm it and after mounting her jet-glider, guides the insect out of the village to safety.

The next morning, Tolmekian troops, led by Princess Kushana and Officer Kurotowa, subjugate the Valley and secure the Giant Warrior embryo, killing Nausicaä's sick father in the process. Kushana plans to mature the Giant Warrior and then use it to burn the Toxic Jungle, even though history warns of fatal consequences. Her father's death drives Nausicaä berserk and she kills several Tolmekian soldiers before the fight is halted by Yupa. Kushana announces her decision to leave for Pejite along with five hostages from the Valley and Nausicaä. Before they leave, Nausicaä's master discovers her secret garden of jungle plants. According to Nausicaä, plants that grow in clean soil and water are not toxic. The jungle's soil, however, has long been tainted by man.

Kushana and her detachment never reach their destination, as an agile Pejite interceptor obliterates the entire Tolmekian wing before being shot down. Nausicaä, her fellow hostages and Kushana crash-land in the jungle, disturbing several Ohmu, which Nausicaä soothes. She then leaves to rescue Asbel, the Pejite pilot and the twin brother of Lastelle, but both are swallowed by quicksand and end up in a non-toxic world below the jungle. Nausicaä realizes that the jungle plants purify the polluted topsoil, producing clean water that remains hidden underground.

Nausicaä and Asbel return to Pejite, only to find it ravaged by the insects. Pejite survivors, boarding a single plane, reveal that they lured the creatures to eradicate the Tolmekians and are doing the same in the Valley to recapture the Giant Warrior. To prevent any intervention, they take Nausicaä captive, knocking Asbel out in the process. Later, with the help of Asbel and his mother, Nausicaä flees on a glider. While flying home, Nausicaä finds a team of Pejites using a wounded baby Ohmu to lead scores of enraged Ohmu into the Valley. Tolmekians deploy tanks and later the Giant Warrior against the herd to no avail: tanks prove too weak and the Giant Warrior, hatched ahead of time, soon disintegrates.

Nausicaä liberates the baby Ohmu and gains its trust; in the process, her pink dress becomes stained by the Ohmu's blue blood, turning completely blue. Both land in front of the herd, but are run over. The herd, however, calms down, and the Ohmu use their golden tentacles to heal Nausicaä's wounded body. Nausicaä awakens and starts to dance on top of the hundreds of glowing golden tentacles. Thus Nausicaä, "clad in blue, surrounded by gold" fulfills the prophecy. The Ohmu and Tolmekians leave the Valley afterwards, while the surviving Pejites remain with the Valley people, helping them rebuild. Meanwhile, a tree is beginning to grow underground, meaning that the planet is beginning to heal. 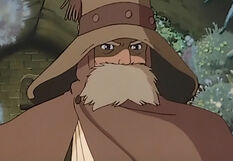 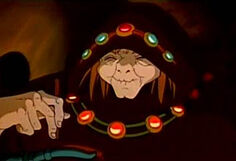 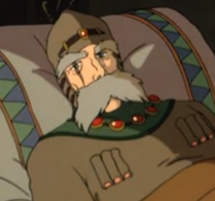 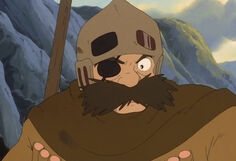 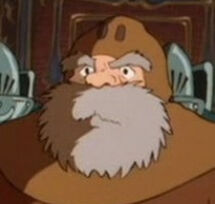 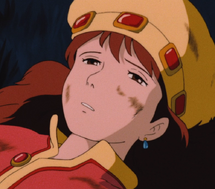 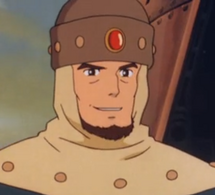 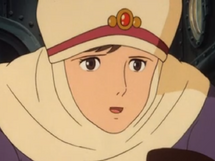