26 (List of Episodes)
Neon Genesis Evangelion (literally "Gospel of a New Era"), commonly referred to as Evangelion or Eva, is a Japanese science-fiction anime series that first aired from October 1995 to March 1996. It was created by the anime studio Gainax and was both directed and written by Hideaki Anno. The series was received well and won several awards.

Evangelion is an apocalyptic anime in the mecha genre. It focuses on a teenage boy recruited by an organization named NERV to control a giant cyborg called an Evangelion to fight monstrous beings known as Angels. The show takes place largely in a futuristic Tokyo years after a worldwide catastrophe. It also centers around other Evangelion pilots and members of NERV as they try to prevent another catastrophe.

The series delves into many themes including spirituality, psychology, and philosophy, while still remaining an interesting drama and exciting action series.

The first two episodes first saw nationwide broadcast in dubbed format on February 24–25, 2003, on Cartoon Network as part of Toonami's Giant Robot Week. Both episodes were edited for content.[1] Later, the entire series aired unedited on Adult Swim from October 20, 2005[2] to April 21, 2006.

In 2000, the "Second Impact", a global cataclysm, destroys most of Antarctica and leads to the deaths of half of all humanity. The Impact, thought by the public to have been a high-speed meteorite impact, causes devastating tsunamis, changes in the Earth's axial tilt (leading to global climate change), and later geopolitical unrest (including general economic distress and nuclear war). Over the next ten years, the research organization Gehirn and its benefactor, the mysterious Seele organization, achieve a number of impressive scientific and engineering goals, including the creation of giant humanoids known as Evangelions and the construction of Tokyo-3, a militarized civilian city located on one of the last dry sections of Japan, in preparation for the arrival of beings known as Angels.

Fifteen years later, 14-year-old Shinji Ikari is summoned to Tokyo-3 by his father Gendo Ikari, the Machiavellian commander of NERV (the paramilitary successor of Gehirn), and coerced into becoming the pilot of Evangelion Unit-01 on the eve of an Angel attack. Shinji begins living with Captain Misato Katsuragi and is soon joined in his mission to locate and destroy the Angels by Rei Ayanami (pilot of Unit-00) and Asuka Langley Soryu (pilot of Unit-02). However, the true nature of the Angels and the Evangelions is increasingly called into question by the conflicting conspiracies and agendas of both Seele and NERV, and their links to the mysterious Human Instrumentality Project.

Shinji Ikari — The Third Child and the pilot of Unit 01. He is the son of Gendo and the "late" Yui Ikari. Abandoned by his father when he was a toddler, Shinji has grown up to be reclusive and withdrawn, choosing to often run away from difficult situations. Over time and with encouragement from Misato, he learns to be less cowardly, more outspoken, and more confident, but his progress is undone near the end of the series. He becomes friends with Toji Suzuhara and Kensuke Aida, something akin to a sibling relationship with Rei, and has a love-hate relationship with Asuka.

Rei Ayanami — The First Child, and the pilot of Unit 00. At the start of the series, she is shown to be socially withdrawn, seemingly emotionless, and remote, with her only apparent relationship being with Gendo Ikari. As the series progresses, she and Shinji grow closer. It is eventually revealed that Rei is a vessel for the soul of the Angel Lilith, and was created specifically by Gendo to be used as a tool for accomplishing instrumentality. Soulless clones of her are kept hidden in the deepest levels of Nerv headquarters to be used as the supposed "cores" of the Dummy Plugs and as replacement bodies for Rei if she should die.

Asuka Langley Soryu — The Second Child and the pilot of Unit 02. She is of mixed German and Japanese descent, but her nationality is American. Asuka is brash, egotistical, and often verbally abusive (especially to Shinji), and has a very high opinion of her appearance and her skill as an Eva pilot. She also has a fierce desire for independence. Her attitude, however, is a front masking deep-seated insecurities stemming from her traumatic childhood. Asuka is openly infatuated with Ryoji Kaji, but is also attracted to Shinji; however, she cannot properly express her affections.

Toji Suzuhara — The Fourth Child. Toji is a tough boy, the stereotypical "jock," and is in constant conflict with Asuka. His younger sister was injured in the battle between the third Angel, Sachiel, and Unit 01, and he beats Shinji up soon after for being indirectly responsible. However, after witnessing firsthand the suffering Shinji experiences piloting Unit 01 in the battle against Shamshel, Toji comes to respect Shinji, apologizes to Shinji for beating him up (his sister was angry at him for beating him up and demands him to apologize), and the two eventually become friends. During the activation test for Unit-03, the EVA is possessed by the Angel Bardiel and the unit is destroyed by Unit-01 under the control of the Dummy Plug system when Shinji refuses to fight against the possessed EVA out of concern for the pilot. He discovers that it was Toji after the battle, seeing him being carried out of the wreckage of the entry plug. Toji survives but is severely injured.

Kaworu Nagisa — The Fifth Child, and the seventeenth Angel, Tabris. He is sent to Nerv by Seele as a replacement pilot for Unit 02 after Asuka's synchronization ratio falls below viability; however, his true purpose is to hasten the Human Instrumentality Project's implementation. He breaks into Terminal Dogma to return to Adam and initiate the Third Impact, but upon discovering that the being there is actually Lilith, he implores Shinji to destroy him. After his death, Kaworu appears in the beginning and middle of Third Impact in The End of Evangelion.

Gendo Ikari — The commander of Nerv who is responsible for the research done on the Evas, Rei Ayanami, and the Human Instrumentality Project. He is the father of the Third Child, Shinji Ikari, and the guardian of Rei. His original surname was Rokubungi, but he changed it to Ikari following his marriage to Yui. At the start of the series, he is the only person having an effective connection to Rei. As the series progresses, his unscrupulous past is revealed, as is the intensity with which he loved Yui. It is later revealed that he wished to use the Human Instrumentality Project as a means of reuniting with his wife inside Unit 01, where all human consciousness would be merged into one, with the initiator of the project becoming god-like.

Misato Katsuragi — The chief operations officer at Nerv. In the series, she initially holds the rank of Captain, with a later promotion to Major. She is the field commander for the Eva pilots, issuing orders and giving battle strategies as well as handling some bureaucratic matters. She is also Shinji and Asuka's guardian, letting them live in her apartment rather than have them live alone. While she is professional and diligent in her duties, she is a slob and a drunkard while off-duty. She is the only survivor of the Katsuragi Expedition, the scientific study led by her father which triggered the Second Impact; the cross pendant she wears was given to her by her father just before his death. She and Ryoji Kaji were lovers during college, and slowly rekindle their romance over the course of the series.

Ritsuko Akagi — Nerv's head scientist and, along with Gendo and Fuyutsuki, is the only person at Nerv fully aware of the Evas' true nature and the purpose of the Instrumentality Project. She is a workaholic and heavy smoker, and has been friends with both Misato and Kaji since college. She is also romantically involved with Gendo, but feels betrayed by Gendo when she realizes that he was using her in the same way that he used her mother. 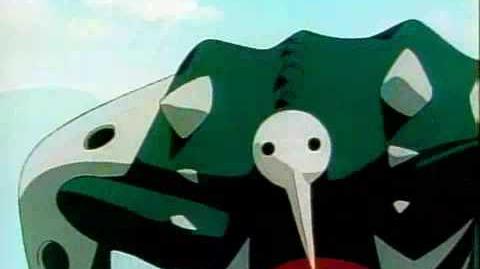 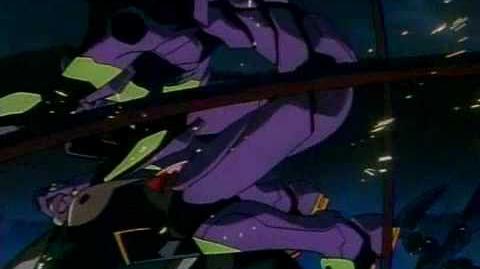 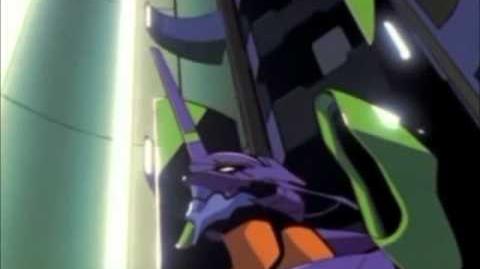 Neon Genesis Evangelion is a 26 episode Japanese anime series created by Gainax. The series was written and directed by Hideki Anno and produced by Project Eva, which included TV Tokyo and Nihon Ad Systems (NAS). All episodes of the series have been released on VHS and DVD in the U.S., most recently as a six-disc version of the Platinum Edition, the "Platinum Complete Edition", which was released on November 22, 2005, but has since gone out of print.

The series was originally broadcast in Japan on TV Tokyo from October 4, 1995 to March 27, 1996. In 2003, WOWOW also aired the series. The series first aired in North America on San Francisco–area PBS member station KTEH in 2000. The first 2 episodes of the series first saw nationwide broadcast in dubbed format on Cartoon Network as part of Toonami's Giant Robot Week from February 24–25, 2003; with both episodes heavily edited for content. Later, the entire series aired, nearly unedited, on Adult Swim from October 20, 2005 to April 21, 2006.