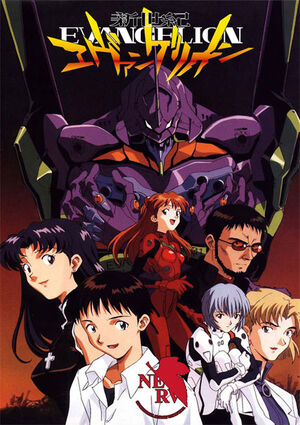 Neon Genesis Evangelion: Death & Rebirth is the first film in the Neon Genesis Evangelion franchise and it consists of two parts, "Death" and "Rebirth". It was released, along with the follow-up, The End of Evangelion, in response to the success of the TV series and a strong demand by fans for another ending. It has since been re-edited and re-released several times.

The End of Evangelion is a 1997 Japanese animated science fiction film written and directed by Hideaki Anno, released as a finale for mecha-based television series Neon Genesis Evangelion.

The film is divided into two episodes, each with a separate Japanese and English title: Episode 25': "Air" / "Love is Destructive" and Episode 26': "Yours Sincerely" / "ONE MORE FINAL: I need you". They effectively replace the series' controversial final two episodes with a more "real world" account of the story's apocalyptic climax.