13 (List of Episodes)
Paranoia Agent is a Japanese psychological thriller anime series created by director Satoshi Kon and produced by Madhouse. Music for the series was composed by Susumu Hirasawa.[3] The series premiered in Japan on WOWOW from February 2, 2004 to May 18, 2004.

Paranoia Agent was previously licensed in North America by Geneon Entertainment who produced an English dub. In February of 2020, Funimation acquired the exclusive streaming and home video rights for the series.[3] The English dub aired on Adult Swim's Toonami block from April 25, 2020 to July 25, 2020.[1][2]

Citizens across Musashino, Tokyo are being attacked and terrorized by a juvenile serial assailant nicknamed "Lil' Slugger". None of the victims can recall the boy's face and only three distinct details are left in their memories: golden inline skates, a baseball cap, and the weapon: a bent golden baseball bat. Two detectives are put on the case, but will they be able to solve the mystery before there's another wave of victims? The plot relays between a large cast of people affected in some way by the attacks; usually Lil' Slugger's victims or the detectives assigned to apprehend him. As each character becomes the focus of the story, details are revealed about their secret lives and the truth about Lil' Slugger.

Lil' Slugger — The enigmatic figure the series revolves around. He appears as a grinning, baseball cap-wearing juvenile who travels on golden inline skates and attacks people with a gold-colored metal baseball bat that is curiously bent.

Tsukiko Sagi — One of the central characters of the series, she is a famous, but timid, character designer best known for a cartoonish dog named Maromi. She carries a plush toy copy of Maromi everywhere. She is Lil' Slugger's first apparent victim in the series, and the catalyst who jump-starts the plot.

Maromi — Maromi is a popular Sanrio-esque mascot created by Tsukiko. A pink dog with big black eyes and droopy ears, Maromi is a parody of real life iyashi kyara (relaxing characters), such as tarepanda and rilakkuma. In Tsukiko's presence (usually when she is alone), Tsukiko's plush Maromi toy walks, rolls its eyes, and talks to her.

Detective Keiichi Ikari — One of two police detectives assigned to investigate the attacks by the Lil' Slugger. He is extremely old fashioned and yearns for the simpler, less hurried times; he is often chastised for this by his young and idealistic partner Mitsuhiro Maniwa.

Detective Mitsuhiro Maniwa — One of two police detectives assigned to investigate the attacks by the Lil' Slugger. Young, idealistic, and a flexible thinker, Maniwa is the perfect complement as well as foil to the more rustic Keiichi Ikari. He is open-minded and unconventional in his methods. 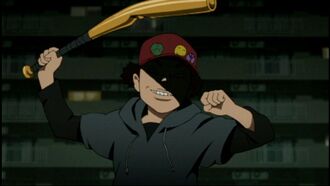 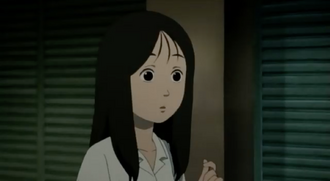 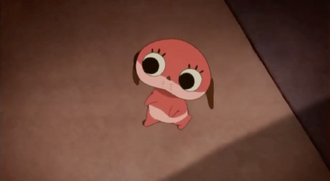 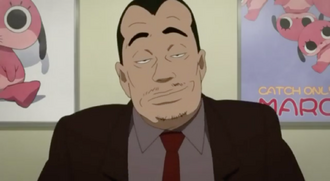 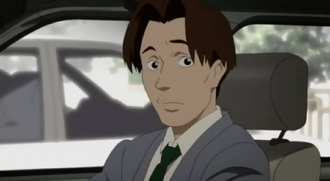 Geneon previously licensed Paranoia Agent in North America and released the series on four DVDs between October 26, 2004 and May 10, 2005. On February 3, 2020, Funimation announced that it had licensed the series for its streaming platform with plans for a Blu-ray release later in the year.[3]

The series began airing on Adult Swim's Toonami block on April 25, 2020 at 1:00 AM, replacing Food Wars!.[1] On May 9, 2020, the series moved to the 12:30 AM time slot.[6] On June 13, 2020, disclaimers were aired along with episode 8, "Happy Family Planning", due to the depiction of suicide in the episode. These disclaimers included information on how to contact the National Suicide Prevention Lifeline and the Crisis Text Line. The series completed its Toonami run on July 25, 2020 and was replaced in the lineup by JoJo's Bizarre Adventure the following week.[2]