47 (List of Episodes)
Patlabor, also known as Patlabor: The Mobile Police, is a Japanese anime series produced by Sunrise, based on the franchise of the same name created by Headgear, a group consisting of director Mamoru Oshii, writer Kazunori Itō, mecha designer Yutaka Izubuchi, character designer Akemi Takada, and manga artist Masami Yūki. The series aired on Nippon TV from October 11, 1989 to September 29, 1990.

Patlabor (a portmanteau of "patrol" and "labor") takes place in what was, at the time of the series' release, the near future of 1998-2002. In this future, advanced robotics have created heavy robots ("labors") for use in a variety of functions: construction, fire-fighting, military, and more. However, though the robots are only machines, their operators are also only human—and humans sometimes turn to crime. Since a heavy labor unit can be a dangerous weapon, the police of the future are set to fight fire with fire, using advanced patrol labor units, "patlabors." This is the story of the Tokyo Metropolitan Second Special Vehicles Division 2, a motley crew of Patlabor policemen and women doing their best to fight crime and live a normal life.

Noa Izumi is the main protagonist of the series, who begins her job as a pilot for the police force's famous Special Vehicles Division. Within days, she's faced with a pack of crazy coworkers and the adventure of a lifetime as their assignments range from rescuing a government minister and saving an ancient tree to thwarting terrorists and guarding a winter carnival.

The series is set in an alternate timeline to the original Patlabor OVAs and films, with an all-new origin story. The feature films follow separate continuities, referred to as the "movie timeline" and the "TV timeline." The different OVA series follow either the movie or TV timelines.

Noa Izumi - Section 2 Division 2 Team 1: The bubbly, perky red-headed gamine labor otaku from Hokkaidō. The main character of the show, Noa is usually at the center of the action. Noa loves her labor much like a pet and named it "Alphonse", a name previously held by a pet dog and a pet cat, respectively. She's somewhat impulsive, albeit not nearly as much as Ohta. Noa is arguably the best pilot in Division 2, although both Clancy and Kumagami have shown extreme talent as well but seldom pilot. She has a natural affinity for labors and gets 110% out of them, much to the amazement of her colleagues. Furthermore, she can drink quite a bit more than her co-workers, and recovers from hangovers much faster, since her family runs a liquor store.

Asuma Shinohara - Section 2 Division 2 Team 1: Son of the head of Shinohara Heavy Industries, the company that makes 90% of the labors in the world. After a falling out with his father, Asuma joined the police force and specifically requested to be assigned to the labor units. Smart, honest to a fault, and sometimes a bit hot-headed, Asuma is a very good officer, although he's often used by Goto as a lackey. Noa and Hiromi's commanding officer in the field, he has a soft spot for the former. Goto recognizes Asuma has some talent in diverse fields, as can be seen in various places throughout the series. He is also a highly skilled labor pilot, certainly better than Ohta.

Isao Ohta - Section 2 Division 2 Team 2: The gun-loving pilot of Unit 2. With a look and attitude better suited for the Marines than a police force, Ohta is comically gung-ho and expects the rest of Section 2 to perform to his standards. He's very brash and often will charge into a situation without thinking it through. In spite of his loud, obnoxious, and often overconfident personality, Ohta's a good cop and is a stand up guy. He is extremely gun-happy, but tends to hit anything other than the target in combat. However, on the firing range where the targets are unmanned and he can remain calm, his accuracy is essentially perfect.

Hiromi Yamazaki - Section 2 Division 2 Team 1: The giant from Okinawa. He is soft spoken and kind hearted. He wanted to join his father as a fisherman but easily gets seasick. He later joined the police force and eventually made it over to SV.2. Yamazaki's too large to fit in a labor's cockpit, so he is designated as the carrier driver for Unit 1. When not on duty he tends to SV.2's vegetable garden where his green fingers can be seen. He's extremely strong, as demonstrated in Movie 1 and 2 where Yamazaki mans the massive anti-labor rifle borrowed from the Narashino Parachute Labor team (apparently an M82 anti-material rifle). He shows the same strength in the TV series when he and Ohta fire the Ingram's Revolver pistol without the aid of a Labor, at the Schaft "Griffon".

Mikiyasu Shinshi - Section 2 Division 2 Team 2: The lone married man of SV.2. Shinshi comes across as a meek man who can be easily pushed around. He is very devoted to his wife, and tends to snap and go off like a stick of dynamite when people make fun of him or his wife. He even scares Ohta when this occurs. He has quite a bit of programming and computer talent but is rarely seen because of his position as the carrier driver for Unit 2.

Kanuka Clancy - NYPD, Section 2 Division 2 Team 2: A temporary member of Section 2, on assignment from the NYPD. Sent to observe a labor unit with the purpose of helping build one for New York City. Highly capable in all duties. Her piloting skills are better than Ohta's, but was assigned to backup duty since acclimating the Labor to a temporary officer would be a poor decision. (Also, keeping Ohta in line is not a job for an idiot). Much like Nagumo, Kanuka is very by-the-book. She is usually all business and sometimes cold to the members of SV.2 with the exception of Noa. Kanuka was born in Hawaii but apparently moved to New York later on. When she travels back to New York, she stops in Hawaii to see her grandmother, whom she loves dearly.

Captain Kiichi Goto - Section 2 Division 2: Captain of Division 2. Was born in the Taito Ward in Tokyo. He seems quite laid back, even apathetic, but is in fact an extremely capable and politically savvy police officer; not only is his strategic awareness quite acute, Goto is as subtle and manipulative as any given situation requires. Hence he got the nickname "Razor Goto" in the police. It was rumored that because of these traits, the top officials in the police force assigned him to SV.2 for fear he might ruffle too many feathers. True to form, however, Goto is on top of most events long before most others are even aware of what's going on. It can also be noted within him that a small sadistic streak exists, in that he enjoys the suffering of his team members on letting them do all the detective work where he already knew what they are sent out to discover; much to the chagrin of his subordinates who loathe this quality. Goto is a heavy smoker, has athlete's foot and can often be seen wearing traditional Japanese wooden sandals around the office. It is very strongly implied that Kiichi has a crush on Shinobu, which seems completely unrequited...

Takeo Kumagami - Section 2 Division 2 Team 2: Joined Section 2 shortly after Clancy's tenure ended, she takes Clancy's place as backup to Unit 2. She trained with the Hong Kong police before getting assigned to the Ministry of Foreign Affairs. She was then offered a position with Interpol but ended up choosing the Special Vehicles department to continue her career. Calm and confident, Kumagami attends to her duties as effectively as Clancy did, but has different ideas about how to go about it. She practices martial arts and can be seen tossing Ohta and the rest of the Division 2 team around in sparring matches when not in the field. Kumagami's only weakness seems to be a fear of the supernatural. She is easily spooked and prone to fainting if scared sufficiently.

Captain Shinobu Nagumo - Section 2 Division 1: Captain of Division 1. Was born in Setagaya Ward in Tokyo. She is a professional, competent police officer, highly regarded by everyone in the police force - basically the exact opposite of Captain Kiichi Goto. Nagumo is a by-the-book style captain (as opposed to Goto who will often use somewhat unconventional methods to meet a goal); she always keeps her mind on the job and never loses her cool. Often she talks back to her superiors when she disagrees with an order, and this is probably why she remains at the SV2 rather than being promoted to another job more worthy of her skills. Despite her conventional mentality, or because of it, she is always there to lend a hand whenever Division 2 needs it. She shares an office with Goto, which means she sees a lot of Goto's layabout act – and also is able to tell that Goto is a much more skilled police officer than he looks (their professional relationship might best be described as "interesting"). It is also implied that Shinobu might have feelings for Kiichi.

Sergeant Tsutomu Gomioka - Section 2 Division 1 Team 2: One of the labor pilots for Section 1, and much like his commanding officer, he's very by the book. A good pilot, although his coworkers in Division 2 seem to have more talent.

Chief Seitarou Sakaki - Section 2 Mechanics: Leader of the labor mechanics that service SV.2. Gruff and loud, Sakaki doesn't like it when Division 2 brings back their labors in less than perfect condition. Threatens to throw all his mechanics into the sea when they don't perform up to his expectations. Sakaki has been a mechanic for most of his life but admits he finds it difficult to keep up with the ever advancing march of technology in the world.

Chief Shigeo "Shige-san" Shiba - Section 2 Mechanics: Second in command to Sakaki, and eventually replaces him when he retires. A total gearhead, he loves his job, probably a little too much, as he can be very hard to relax when he gets fired up. Shige is good friends with Asuma Shinohara.

Detective Takahiro Matsui - Tokyo Metropolitan Police: A calm and cool man, he has quite a deal of respect for Goto which is mutual. He assists with the investigative work when Goto can't do it.

Badrinath "Bud" Harchand - A 15 year old boy from India who likes computer games. He pilots the J9 Griffon labor. As a pilot, he is as talented as Noa and considers her to be his rival.

Richard Wong - SHAFT Enterprises: Geeky, intelligent, but scheming head of one of SHAFT's experimental divisions on Labor development. He was involved in a number of incidents in Hong Kong prior to coming to Japan. 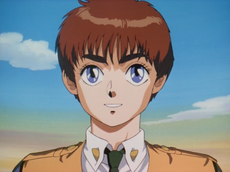 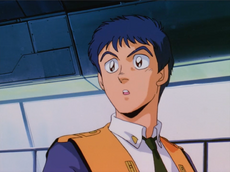 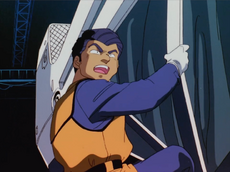 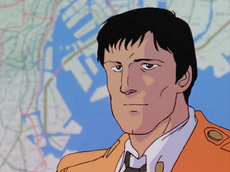 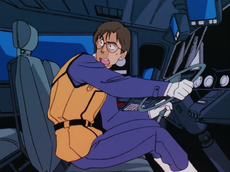 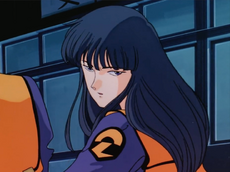 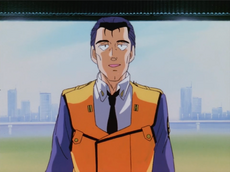 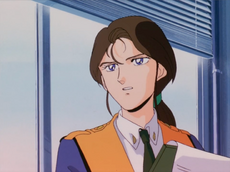 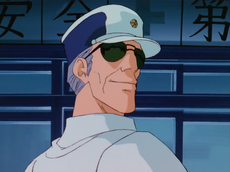 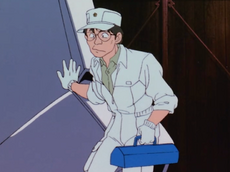 Central Park Media (CPM) released the series on DVD from 1998 to August 9, 2005. However, these releases are now out of print due to CPM losing the license. Maiden Japan licensed the series and began re-releasing the series in North America on July 16, 2013 on both DVD and Blu-ray.[2] 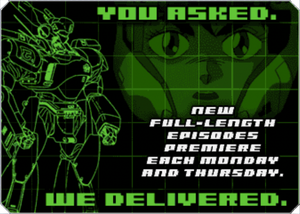 Patlabor never aired on any of the Toonami blocks in the United States. However, it was one of the series offered on the retooled Toonami Reactor 2.0, beginning on February 18, 2002.[1]