April 15, 2007
Pokémon Chronicles is a television series comprising the English-dubbed versions of a number of Pokémon anime TV specials. Many of the episodes are from the Weekly Pokémon Broadcasting Station show in Japan, but also contained The Legend of Thunder! and shorts from the Pikachu's Winter Vacation series. The series revolves around characters that Ash Ketchum met along his journeys, the series consisted of 22 episodes.

Pokémon Chronicles focuses on recurring minor or departed major characters, other than Ash Ketchum, from the main Pokémon anime, it's cast shifts from episode to episode, and many different characters have played starring roles.

Ash Ketchum — Ash's Pokémon get into mischief even when Ash is not around. In the Winter Vacation episodes they are joined by Pikachu and some of Misty and Brock's Pokémon and meet a group of "Snow Snorlax."

Brock — Brock travelled around the Kanto region and the Johto region with Ash but between "Gotta Catch Ya Later" and "You Can Never Taillow", he visited his Pokémon Gym in Pewter City. There he found that his mother had taken over the gym, turning it into a Water Gym.

Casey — Casey was introduced in Johto, where she met Ash. They met a few times after that, although Casey only got 4 badges in the time it took Ash to get 8. When she is not training Pokémon, she is a big fan of the fictional Electabuzz baseball team. Her Pokémon are Meganium (her starter), Pidgey, Rattata, Beedrill (given by Ash), Elekid, and the dub says she has a Magmar and Rapidash.

Gary Oak — Gary Oak is Professor Oak's grandson. He was very stuck-up and traveled with his female cheerleaders around Kanto. He eventually matured after losing in the Indigo Plateau a round before Ash. He re-appeared in Johto, and after losing to Ash in the Silver Conference, decided to become a Pokémon Professor.

Jimmy — Jimmy is on his way to become a great Pokémon Master with his Typhlosion, so that he can help the kids in New Bark Town. He is based on Gold, the male protagonist from Pokémon Gold, Silver, and Crystal. He first appears in the first three episodes of the Pokémon Chronicles, called Raikou: The Legend of Thunder

Marina — Marina is an old friend of Jimmy's, and she battles to entertain, always making sure she puts on a good show. She also performs in dance routines with her Pokémon. Marina is based on the female character from Pokémon Crystal. Her favorite Pokémon are her Misdreavus (nicknamed "Little Miss") and Croconaw (nicknamed "Wani-Wani"). Marina also appears in episode 10 of Diamond & Pearl as the poster girl for the Poketch, on the back of a magazine Dawn was reading. She later appears in episode 41 of Diamond & Pearl in a video of her doing a double contest appeal.

Vincent — Vincent battled Ash in the Silver Conference, although he was known there as Jackson. Vincent's favorite Pokémon is his Meganium. Vincent also was seen in the three parts of The Legend Of Thunder, as Marina's somewhat love interest, even going as far as calling himself Fabu-Vinny. He seems to get a little paranoid when it comes to Marina, getting jealous when Marina fell in love with Eugene, because he wore a cape, just like Lance, the first known person that Marina actually likes (Fan-girl style), others being Jimmy and Eugene.

Misty — Misty has traveled everywhere with Ash since he broke her bike, as well as with Brock and Tracy in the Orange Islands. But at the end of Johto saga of the Pokémon anime, her sisters went on a World Tour, and she had to become the official Gym Leader of Cerulean City. She is the major character in "Cerulean Blues".

Professor Oak — Professor Samuel Oak is the world's foremost authority on Pokémon. When Trainers such as Ash Ketchum and Gary Oak begin their Pokémon Journey, Professor Oak gives them their starting Pokémon - Bulbasaur, Charmander, or Squirtle, (or Pikachu in Ash's case) When he is not looking after all the Pokémon that Trainers do not have with them at the time - (each trainer may carry up to six on his or her person) - he is studying them and upgrading the Pokédex.

The Pichu Brothers — (individually known as Pichu Little and Pichu Big) The Pichu Brothers live in Millennium City. Their days are all about having fun with the Pichu Possé in the clubhouse. They met Pikachu in "Pikachu and Pichu" - the mini-movie before the third movie, as well as an anime inside Pokémon Channel - they get into other mischief later, either on their own or with Team Rocket's Meowth.

Ritchie — Ritchie and his trusty Pikachu, Sparky, battled Ash at the Indigo Plateau, and they have been friends ever since, even though they only met once again (in the Whirl Islands.) Ritchie does decide to go and meet Ash in Hoenn, but he apparently decides against it, because he is later seen in the Sevii Islands.

Tracey Sketchit — Tracey Sketchit traveled with Ash and Misty in the Orange Islands, and is now a lab assistant for Professor Oak. He loves drawing, and has produced many accurate sketches of Pokémon. He is also good friends with Brock. 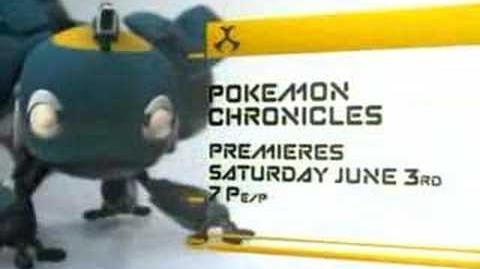 Pokémon Chronicles debuted on May 11, 2005 on Toonami UK and YTV started airing the series in Canada during the fall of 2005. The series made its U.S. premiere on Cartoon Network's Toonami block on June 3, 2006 after it had already ended in most other countries. In addition, episodes were available online through Toonami Jetstream. The series moved to the Miguzi block on November 6, 2006, then it aired once more on Cartoon Network in September 2010 as part of a Johto legendaries marathon to promote Pokémon Heart Gold and Soul Silver.