5:00 PM
Pokémon: The First Movie: Mewtwo Strikes Back, commonly referred to as Pokémon: The First Movie, originally released in Japan as Pocket Monsters the Movie: Mewtwo's Counterattack, is a 1998 Japanese anime film directed by Kunihiko Yuyama, the chief director of the Pokémon television series. It is the first theatrical release in the Pokémon franchise. It was released in Japan on July 18, 1998. The English-language adaptation, produced by 4Kids Entertainment and distributed by Warner Bros. Pictures (under its Kids' WB banner), was released in North America on November 10, 1999.

The film primarily consists of three segments: "Pikachu's Vacation", a 21-minute feature focusing on the series mascot Pikachu; "Origin of Mewtwo", a 10-minute featurette that functions as a prologue to the main feature; and "Mewtwo Strikes Back", the main 75 minute feature film. The North American version omitted "Origin of Mewtwo" from the package before its U.S. theatrical run due to its dark nature, as the target MPAA rating was G; the first two minutes were restored in the film's release on VHS and DVD as "The Story of Mewtwo's Origin". The featurette was eventually dubbed and restored as a special feature in the U.S. release of the direct-to-video follow-up film sequel Pokémon: Mewtwo Returns.

As Pokémon was extremely popular when the film was released, it was a box office success worldwide. The First Movie topped box office charts in its opening weekend, and eventually grossed $163.6 million worldwide, despite negative reviews from film critics. It is the 2nd highest grossing TV adaptation film, behind The Simpsons Movie.

For the film's theatrical release, select theaters would give away exclusive Pokémon trading cards, to capitalize on the success of the trading card game. The cards featured likenesses of Electabuzz, Pikachu, Mewtwo, and Dragonite, and were dispensed in random order for each week it was in that particular theater. The subsequent releases of Pokémon: The Movie 2000 and Pokémon 3: The Movie featured a similar marketing campaign.

The movie premiered on Cartoon Network's Toonami block on Friday, March 26, 2004 at 5:00 PM. "Pikachu's Vacation" was aired along with the film, marking its premiere on Cartoon Network, as previous airings of the film on the network did not include the short.[1]

Pikachu's Vacation, is a 21-minute short film that is shown before Mewtwo Strikes Back in both the theatrical, VHS and the DVD version of the main film. It is the first of the "Pikachu shorts" in what would be a traditional process of hosting a 20+ minute mini-movie before the main Pokémon feature that would last up until the sixth film. The mini-movies focus primarily on an action-packed affair involving solely the Pokémon seen from the anime as they take part in a scenario that eventually illustrates a moral.

In Pokémon fan communities, Pikachu's Vacation was noted for introducing the never-before-seen Pokémon character Snubbull, as well as the first primary anime appearance of Marill. This became a tradition for all Pikachu shorts, as they were used to introduce new Pokémon from the upcoming "generations" of Pokémon games, cards, and anime material.

When Ash and his friends stumble upon a Pokémon-only vacation resort, they decide to let their Pokémon have a day of fun and relaxation and let all their Pokémon out as the trainers go relaxing on their own. Pikachu and the Pokémon (Bulbasaur, Charizard, Squirtle, Pidgeotto, Geodude, Onix, Vulpix, Zubat, Staryu, Goldeen, Psyduck, and Togepi) go off into the resort and immediately contend with an unhappy Togepi, which they succeed in calming down. Soon, a group of border-ruffian Pokémon — a Raichu, Cubone, Snubbull, and Marill — come along and immediately cause trouble for Pikachu's group. The ensuing standoff soon becomes a series of competitions such as a swimming race. Their increasingly passionate rivalry soon comes to a standstill when Pikachu's companion Charizard finds its head stuck. Putting aside their squabble, Pikachu and Raichu's groups join together to release Charizard, and they soon find themselves as friends for the rest of the day. At the end of the day, Pikachu and his fellow Pokémon leave the resort with fond memories and new friends and rejoin their trainers.

The devious leader of the Team Rocket Organization, Giovanni, has a fervent ambition to take control of the Pokémon world through both financial and military means. To achieve his military needs, he covets a Pokémon stronger and more adept than any other, a veritable living war weapon, so he enlists a scientist named Doctor Fuji to create this being from the DNA of the rarest and most powerful of Pokémon, Mew, which Fuji found on a previous jungle expedition. Fuji accepts, for he is heavily into the prospect of cloning to create and restore life itself, because of his love for his deceased daughter, Amber. At the time of her tragic death, Fuji was devastated. Rather than trying to overcome his grief, Fuji figured he could instead clone Amber, and was in the process of creating Amber's consciousness in his offshore laboratory. However, his wife, as much as she loved their daughter, could not bear to see Fuji’s misguided drive to tinker with life, and thus she parted with him for good. Fuji then received the order from Giovanni to commence the Mew cloning project, which he continued while trying to clone Amber.

A while passes, and a now physical, but young, Mewtwo rests in an unconscious slumber inside a containment cell, next to a cell containing the glowing conscience of a cloned Amber. Mewtwo stirs in mind and begins to communicate with the artificial conscience of Ambertwo in a plane of limbo, and the two entities grow a personal bond. This exchange is tragically short-lived, however, as the inability of science to recreate souls catches up with the project, and Ambertwo’s consciousness fades into the darkness forever with the other prospective clones. She leaves the traumatized Mewtwo with the advice that life is wonderful, and to be alive is the greatest gift he has. Mewtwo, confused by her departure, succumbs to grief and desperately calls out for Amber telepathically, his brainwaves nearly overloading the lab’s systems. Fuji immediately administers a hundred doses of serum, forcing Mewtwo to be subdued into an artificial state of calmness and ignorance of what just transpired. Fuji, emotionally broken by the now-permanent loss of his daughter, is now intent on ensuring that Mewtwo, his brainchild, survives.

Alone in the darkness, and unaware of whatever he apparently lost, Mewtwo develops in size and power, but is tormented in sleep by a single, cryptic question: “Life is wonderful… but why?”

The Pokémon Mewtwo was created in an island laboratory from the DNA of Mew, a rare Pokémon believed to be extinct, recovered from fossilized remains. Displeased with the concept of being nothing more than a mere lab experiment, Mewtwo destroys the laboratory. Shortly afterward, he meets Giovanni, the head of Team Rocket, who proposes a partnership with the Pokémon in exchange for helping him control his powers. Mewtwo is "trained" over the next few months, being pitted against challengers in Giovanni's gym and restraining Pokémon for Team Rocket to capture. Mewtwo eventually realizes that Giovanni is merely using him as a tool and destroys his headquarters. After defeating Giovanni, Mewtwo flies back to the island where he was created and begins plotting revenge against humanity.

Meanwhile, Ash Ketchum and his friends Misty, Brock, Pikachu, and all their Pokémon companions receive an invitation to a party hosted by the world's "greatest Pokémon Master" on New Island. Ash and his friends are excited and rush to the docks in an attempt to catch a boat to New Island, but a storm is mysteriously formed and all boat rides to the island are canceled. Undeterred, several trainers make their way out to the island by riding their Pokémon, though neither Ash nor his friends have any Pokémon of their own that can help them safely navigate the stormy sea. In their latest plot to steal rare Pokémon, Team Rocket offers the trio a lift to the island, disguised as a pair of Vikings, but their small wooden boat is destroyed by a wave. Ash and his friends manage to reach the island with their aquatic Pokémon, and are escorted inside the palace on the island.

Mewtwo reveals himself to Ash, his friends, and three other trainers who braved the storm, as the "World's Greatest Pokémon Master", and that it had created the storm with its powers to test the trainers' wills. After being berated by Mewtwo for the relationships they share with their Pokémon, Ash and some of the other trainers challenge Mewtwo after witnessing Mewtwo's confession of having kidnapped Nurse Joy for his own personal purposes, the trainers pit their Pokémon against Mewtwo's clones of Venusaur, Blastoise, and Charizard. The clones easily defeat the Trainers' Pokémon and Mewtwo proceeds to steal all the Pokémon present, including Ash's Pikachu, with a special set of Poké Balls. Ash pursues his Pokémon as they are taken deep into a cloning facility on the island and rescues them while they are being cloned. The clones join with Mewtwo and the cloning machine explodes, releasing all the captured Pokémon. Mewtwo announces his intentions to overthrow humanity with his army of Pokémon.

Enraged, Ash lashes out at Mewtwo, who repels and blasts him away with his psychic powers. Ash is saved by Mew, the rare, playful Pokémon having appeared periodically before, who is engaged by Mewtwo. A brutal battle between the Trainers' Pokémon and their clones erupts, although Pikachu refuses to fight with his own clone resorting to slapping it (Meowth's clone also seems to refuse to fight, causing the original Meowth to ponder on what the two sides have in common).

The trainers are unable to bear this senseless violence, even while Mew and Mewtwo grow tired but continue fighting. In an attempt to put an end to the ordeal, Mew and Mewtwo sum up all their remaining powers for one final duel. However, just as they open fire, Ash runs to the center of the arena in a brave but desperate attempt to stop the fight. Both Mew and Mewtwo's attacks hit Ash at the same time, turning him to stone after he sinks onto the floor.

Pikachu runs to Ash's side and tries to wake him up. He uses Thunderbolt on Ash, while the other Pokémon, Brock, Misty, and Nurse Joy look on. After several attempts to revive Ash using Thunderbolt go in vain, Pikachu grows tired and stops. Realizing that Ash is dead, Pikachu starts crying for his fallen master, with the other Pokémon in the arena doing the same. Their tears all gather together and eventually reach Ash, their mystical healing powers bringing him back to life. Overjoyed, Pikachu leaps into Ash's arms as the two embrace, happy to be reunited once again.

As everyone rejoices, Mewtwo, taken aback by Ash's act of selflessness to save all the Pokémon, has an epiphany over the relationship between humans and Pokémon, and realizes that the circumstances of how one is born should not be allowed to divide anyone. He leaves the island with Mew and the cloned Pokémon, erasing everyone else's memory of the horrifying incident, knowing it is for the best.

Ash and his friends find themselves back on the docks with no idea how they got there. Ash looks up to the sky and spots Mew flying past, and recounts to his friends how he saw a rare Pokémon on the first day of his journey. 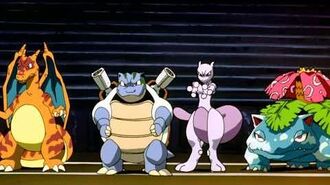 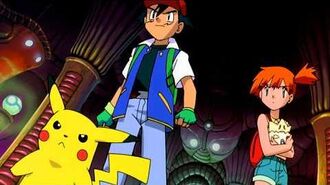