Pokemon 3: The Movie: The Spell of the Unown

5:00 PM
Pokémon 3: The Movie: The Spell of the Unown, is a 2000 Japanese animated film directed by Kunihiko Yuyama as the third feature-length Pokemon film. This adaptation, the final film to be distributed by Warner Bros., was produced by 4Kids Entertainment. Pokémon 3: The Movie opened in theaters in Japan on July 8, 2000. The film was released to theaters in the United States on April 6, 2001. The film proved less successful in the box office compared to previous films. Although, during its 10 week box office run, Pokémon 3: The Movie still made a significant profit-margin, with a worldwide gross of $68,411,275.

Like its predecessors, the film is preceded by a 20-minute short titled Pikachu and Pichu, which marks the debut of the mischievous Pichu Bros., who help Pikachu reunite with Ash after being separated. This was the first Pokémon film to premiere in an IMAX theater. The realistic crystallization and Unown created a 3D effect in the movie. It was also the last Pokémon film released theatrically in the UK, Sweden, Finland and in Latin America, except in Brazil.

The movie premiered on Cartoon Network's Toonami block on Friday, April 16, 2004 at 5:00 PM, during Dragonball Chronicles. The short, Pikachu and Pichu, was aired along with the film.[1][2]

Pikachu and his friends are left on a skyscraper in Big City by their trainers, who go off to prepare an unknown surprise for the Pokémon. Pikachu meets the Pichu Brothers, saving the younger one from falling off an opposite building. A group of Murkrow chase Pikachu off a flagpole, and he uses a group of Hoppip to reach the other side, sending Meowth who is window-cleaning, flying into a billboard. The Pichu Bros. assist Pikachu in returning to his friends but they end up going on a journey across the city to the Pichu Bros' playground. On the way, they get chased by a Houndour who they later encounter again. The angry Houndour chases the three around until he nearly knocks the playground over. Pikachu, the Pichu Bros., Houndour and their assortment of friends manage to save the playground. Pikachu realizes it is nearly six o'clock and he must return to his friends before Ash, his trainer, does. Pikachu and the Pichu Bros. use a tire to get to the building, sending Meowth flying again. The three arrive in the nick of time, the Pichu Brothers departing. Ash, Misty and Brock arrive and take the Pokémon into a room where a party has been laid out for them in celebration of the first anniversary of Ash and Pikachu's meeting.

Spell of the Unown

The feature film focuses on the beautiful town of Greenfield. A resident of the town, the research scientist Professor Spencer Hale, conducts research on the elusive Unown. He and his assistant, Skyler, discover a site of ruins, but Hale is sucked into the dimension of the Unown.

His disappearance leaves his young daughter Molly alone, her mother having disappeared previously. Molly finds a box of tablets containing Unown images and begins assembling the letters, which summons the Unown themselves. The Unown use their powers to make Molly's wishes come true, transforming her manor house into a crystal-like palace which spreads across the town and cuts her off from the world. Entei is created to represent Molly's father. Various people come to help sort out the Unown, including Professor Oak and Delia Ketchum (Ash's mother).

Meanwhile, Ash and his friends meet and befriend a trainer named Lisa. They come into Greenfield in the process and agree to join in the rescue mission to save young Molly. However, Entei kidnaps Delia, following Molly's request for a mother as well. Entei's powers hypnotize Delia into thinking she is Molly's mother. Ash, Misty, Brock and their Pokémon head out to the mansion to save Delia, communicating with Professor Oak and Skyler thanks to a PokéGear device given to them by Lisa. Team Rocket try to investigate the mansion, only to be blasted out of the air by Entei into the depths of the mansion. Molly watches Ash and the others through a television and falls asleep, imagining herself being a Pokémon Trainer. Entei then creates a dream version of Molly as an adult and takes her to battle the three. She first fights Brock, but her dreamed-up Pokémon are stronger than his; she then has a more friendly fight against Misty in an underwater battle, but the winner is not shown.

Ash manages to locate Molly and Delia, but Molly refuses to leave with him and the mansion transforms. Entei refuses to allow Ash to leave with his mother, and fights his Pokémon. He then blasts Ash and Pikachu off a cliff, but they are saved by the arrival of Ash's Charizard. Charizard, with Ash on his back, battles Entei until he is knocked out of the sky. Entei nearly kills Charizard until Molly commands him to stop and begs that no more fighting happens, which manages to stop Entei. Ash and his friends convince Molly to leave with them, and Entei reveals he was created by the Unown to be her father.

The Unown suddenly lose control of their powers and start to seal the group in the mansion. Ash, Pikachu, Charizard, Misty, Brock, Delia, Molly and Team Rocket escape down to the hall where the Unown are. Pikachu and Charizard attempt to break the forcefield protecting the Unown, but they are unsuccessful—until they are joined by Entei, combining their powers to destroy the shield with Molly's support. Entei sacrifices himself and the Unown return to their dimension, reversing all of their effects on the world and returning Professor Hale to the ruins where he originally vanished.

The group ventures outside, where Professor Oak, Skyler, Lisa and others meet them. Team Rocket hides in the mansion upon seeing all of the police outside and vow they will succeed or fail in their next scheme. In the end credits, Charizard and Lisa depart from Ash's company; Molly is seen with her own Teddiursa and reunites with her father—and later, with her mother. 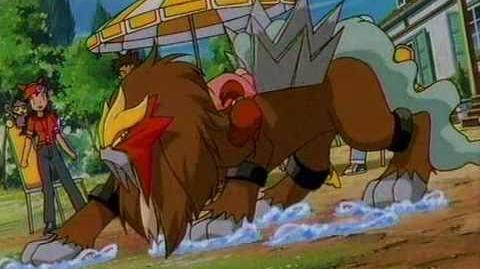 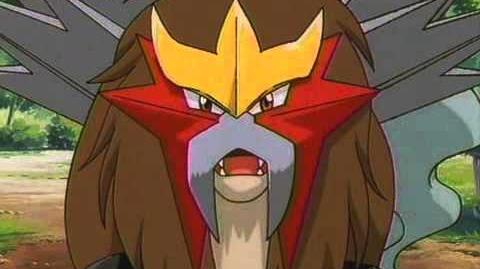