Pokemon Mystery Dungeon: Team Go-Getters out of the Gate!

7:30 PM
Pokémon Mystery Dungeon: Team Go-Getters Out of the Gate! is a special episode of the Pokémon anime series. It was first broadcast in Japan on March 23, 2007 and in the United States on September 8, 2006 on Cartoon Network.

Unlike previous special episodes, Team Go-Getters does not take place in any continuity of the main storyline. Instead, the plot is based on the spin-off games, Pokémon Mystery Dungeon. The story involves a young child turning into a Squirtle and teaming up with a Chikorita and Charmander to form a Rescue Team.

The special premiered on Cartoon Network's Toonami block on September 9, 2006, at 7:30 PM.

The episode begins with Charmander's voice calling out from the darkness, asking if Squirtle is okay. The sleeping boy wakes up, and can't believe himself when he sees a talking Charmander. Charmander then points out that he's a Pokémon too. The boy takes a look at his reflection in a river beside him, and sees that it is true! He has turned into a Squirtle, and has no recollection at all how this happened.

Later, Squirtle wakes up at a house, and takes a look at his reflection in a pool of water, seeing that he truly is a Squirtle. While trying to get a closer look, he falls into the water. He starts sinking, but to his surprise, he finds himself able to breathe underwater. He swims around for a while and starts thinking that being a Pokémon isn't so bad after all. As he's a Water Pokémon, he tries to use Water Gun, but it turns out as Bubble instead. While admiring how pretty the bubbles are, he sees that Charmander has entered the house with a Chikorita. They think that Squirtle is pretty weird, as he acts like a human. Squirtle tries to explain that he really used to be a human, but Charmander and Chikorita don't seem to take him seriously. Charmander asks what Squirtle thinks about the place, and Squirtle says that he loves the house. Charmander, however, explains that it's not a house but their Team Base. He then throws Squirtle a Rescue Team Badge, and explains that from now on, he's a member of their Rescue Team, Team Go-Getters. Squirtle asks what a Rescue Team is, shocking Charmander and Chikorita. Just then, an earthquake strikes, and Squirtle starts panicking, but it goes over quickly and Charmander and Chikorita explain that it is normal, and those earthquakes are why Rescue Teams exist, to help Pokémon that are in trouble. Chikorita says that Squirtle must be the only Pokémon around that doesn't know anything about this. Squirtle tries to explain that he was a human, but Charmander and Chikorita still don't believe him, and instead push him out and tell him that they're going to the Pelipper Post Office to look for a new rescue mission. They give Squirtle their bag, and he tries to keep up with them as they run ahead.

Meanwhile, at the Pokémon Square, the Whiscash Elder tries to calm down crying Pichu, and tells him that Alakazam and the other Team A.C.T. members are sure to save his older brother Pikachu. Snubbull, however, points out that Team A.C.T. is at the Magma Cavern, trying to save Minun and Plusle. Whiscash tells Pichu that despite this, they still have many Rescue Teams to do the job. Just then, Team Go-Getters arrives, only to be pushed away by Ekans, Medicham, and Gengar of Team Meanies, who are ready to take the case. Whiscash gives both Rescue Teams the mission to go through the Sinister Cave and save Pikachu. Gengar, however, doesn't seem to think he's going to need help from the other team.

Chikorita leads Charmander and Squirtle to the Kecleon Brothers' shop for supplies, but when they get there, they find out that the whole shop has been emptied by some greedy customers. When they're about to leave, Squirtle asks who those customers were, and the Kecleon Brothers say that they were Gengar and his companions from Team Meanies. Later Team Go-Getters checks out their bag, which is full of Berries, but nothing else. Team Meanies then appears behind a tree, mocking the three Pokémon about how they could save anyone with just Berries. Charmander tries to explain that Berries can be really useful. Gengar sends Ekans forth, and it eats all the Berries. Outraged, Squirtle tries to use Bubble on them, but his attack is easily stopped by Gengar's Night Shade. Team Meanies then leaves, leaving Team Go-Getters with just two Oran Berries. Just then, however, Aunty Kangaskhan comes and offers her help. She gives them each their own Pecha Scarves, and a bag of Corsola twigs. She then wishes them luck as Team Go-Getters leaves for the rescue mission.

Team Go-Getters enters the Sinister Cave and starts going through, having their way lit by Charmander's tail flame. Then they hear someone crying for help. Charmander locates the voice coming from behind a big rock, and uses Metal Claw to break it, revealing a small tunnel. Out comes Pichu, who is terrified of the darkness. Charmander hands Pichu the other one of their Oran Berries, and Pichu quickly regains his strength. Pichu explains that as he couldn't just sit and do nothing while his big brother was in trouble, he followed Team Meanies. They weren't too pleased to see Pichu, so Gengar tricked Pichu into the tunnel and trapped him inside by blocking the tunnel way with a big boulder that he lifted with Confusion. Team Go-Getters is outraged at such behavior, and decides to rescue Pikachu before Team Meanies can.

The Rescue Team then reaches a group of sleeping Shroomish. Charmander tells everyone to keep their voices down, but Squirtle accidentally bumps into one Shroomish, and quickly all the Shroomish in the cave are awake, and use their PoisonPowder on them. Team Go-Getters quickly runs away, but the Shroomish are following them. Charmander uses Ember, scaring the Shroomish. As he tries to do the same again, Charmander ends up using Flamethrower instead. The Shroomish run away and Pichu congratulates Charmander and tells him that he just leveled up. As they continue forward, Squirtle starts thinking that they all might have leveled up because the PoisonPowder did nothing to them. Chikorita, however, explains that this was due to the Pecha Scarves Aunty Kangaskhan gave them.

Team Go-Getters reaches the end of the cave, and Pichu notices Pikachu's Treasure Bag on the ground and picks it up. Just then, a Skarmory shows up, snatches Pichu and flies away. He is taken as a prisoner to the top of a mountain, with his brother Pikachu, who apologized for getting him into trouble as well. Pichu, however, tells Pikachu that Team Go-Getters is on the way to rescue them. While climbing the mountain, Squirtle is tired as the top doesn't seem to get any closer. He thinks that he could use Water Gun to rocket himself there, but when he tries to use it, it just turns out as Bubble again.

Then Team Go-Getters notice something lying in their path; Team Meanies! They explain how they had been surprised and defeated by Skarmory. Squirtle, Chikorita and Charmander then take their last Oran Berry, split it into three parts, and feed two parts to Medicham and Ekans respectively, recovering their healths instantly. At first, Gengar refuses to take his part, but when Squirtle tells how they're all Pokémon, and therefore like brothers who must be helped when needed, Gengar accepts and eats his piece of Oran Berry.

Finally Team Go-Getters reaches the mountain top, and see Pichu and Pikachu as well as Skarmory. Skarmory doesn't like the intruders and attacks them. Chikorita tries to use Razor Leaf, but Skarmory just uses Whirlwind to blow the leaves away before attacking Chikorita with Steel Wing. Squirtle attacks Skarmory with Bubble, but Skarmory easily avoids the Bubbles and uses Fury Attack on Squirtle.

Team Go-Getters retreats. Seeing how strong Skarmory is, they decide to use the Corsola twigs Aunty Kangaskhan gave them. They open the bag, and find three twigs, one for each of them. They start a combination attack. Charmander uses Flamethrower, and while Skarmory dodges it, Chikorita throws her twig, but Skarmory easily dodges it too. Squirtle then uses Tackle on Skarmory, knocking it off balance. Charmander throws his twig, but Skarmory just knocks it away and prepares for a new attack. Pikachu then hurries Pichu to drop the content of his Treasure Bag out. A Seed falls out, and Pikachu kicks it, sending it flying into Squirtle's mouth. Squirtle swallows the seed, and when he dodges Skarmory's attack, he and everybody else notice that he's a lot faster now. Pikachu explains that the Seed was a Quick Seed, which makes its eater's moves super-fast. Squirtle uses Skarmory's confusion to his advantage, and throws his twig at Skarmory, scoring a direct hit. Charmander attacks with Flamethrower and Chikorita goes with Razor Leaf. As Squirtle tries to add a Bubble attack to the barrage, he finally uses Water Gun! The attacks make a direct hit, and Skarmory is finally defeated. Charmander and Chikorita admire how strong Squirtle's Water Gun was.

Team Go-Getters releases Pichu and Pikachu from their ropes. They're very glad for being saved. Just then, Skarmory wakes up, and doesn't seem to remember anything that just happened. Chikorita suspects that Skarmory possibly hit its head. Whatever the case, Team Go-Getters celebrates for successfully completing their first mission. Then they see a Pelipper flying towards the Pokémon Square, and they rush back to the town in hope for a new rescue mission. Squirtle ends the episode by saying that as long as he's going to be a Pokémon, he's going to stick in Team Go-Getters with Charmander and Chikorita. 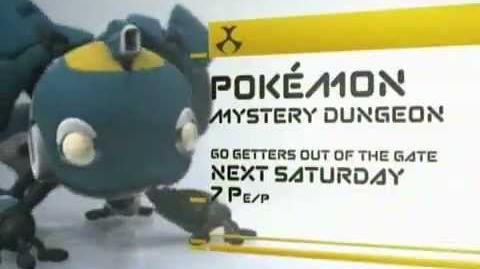