Pokemon The Movie 2000: The Power of One

5:00 PM
Pokémon: The Movie 2000, originally released in Japan as Pocket Monsters the Movie: Revelation Lugia, is a 1999 Japanese animated film directed by Kunihiko Yuyama. The film was the second Pokémon feature-length film, taking place during the Orange Islands saga of the series and featuring several new Pokémon, including Lugia and Slowking. Brock, who temporarily left during the season on which the film is based, makes a cameo appearance trying to protect the Pokémon in Professor Ivy's lab.

Pokémon: The Movie 2000 has two parts: the feature presentation and a 20-minute short titled "Pikachu's Rescue Adventure". The film is set during the Orange Islands saga, where Ash, Misty and Tracey enter Shamouti Island. While there, they discover the three legendary Pokémon, Moltres, Zapdos and Articuno. When a collector named Lawrence III attempts to steal the three Pokémon and Lugia attempts to stop him, the fate of Ash, Lawrence III and Lugia is at stake.

The film was released in Japanese theaters on July 17, 1999. The English version, produced by 4Kids Entertainment and distributed by Warner Bros. in association with Nintendo, was later released in the United States on July 21, 2000. Pokémon: The Movie 2000 earned less at the box office than its predecessor, Pokémon: The First Movie, despite increased promotion and slightly better critical reception. The movie was released on VHS and DVD in the U.S. on November 14, 2000.

The movie premiered on Cartoon Network's Toonami block on Friday, April 2, 2004 at 5:00 PM, during Dragonball Chronicles.[1] The short, Pikachu's Rescue Adventure was not aired along with the film.

When Togepi falls down a dark hole, Pikachu, Bulbasaur, Squirtle, Marill, Venonat, and Psyduck give chase and find themselves in a giant tree that once was Pikachu’s old home. With help from Pikachu’s old friend, Elekid, the Pokémon find Togepi but she has been mistaken for an Exeggcute egg. The Pokémon head off into the depths of the tree to find the missing egg, meeting a trio of dancing Bellossom along the way.

A severe storm hits the area and Pikachu and his friends try to protect the Exeggcute eggs from being blown away. The grass Pokémon lend a hand and Snorlax saves everyone with his great strength. The storm fades when a Dragonair appears and calms the storm and a Chansey appears, revealing she had the missing egg all along. When the eggs are reunited, Exeggcute suddenly evolves into Exeggutor with the assistance of a Leaf Stone. Pikachu and his friends say farewell to Elekid and the others and head back to their trainers. Meanwhile, Meowth tries to find his way to a campsite but ends up getting caught on Pikachu’s mishaps and gives up.

The Power of One

Lawrence III, a Pokémon collector, strives to make a legendary prophecy occur. His plan to capture the legendary birds Moltres, Zapdos and Articuno will ultimately lead to the capture of the "Beast of the Sea" Lugia. Lawrence sets out in his flying hovercraft to the heart of the Orange Islands to capture the three legendary birds, referred to as the Titans of Fire, Ice and Lightning. He successfully captures Moltres, but the balance of power the birds have over the world's climate begins to collapse, causing all sorts of weather phenomena across the world, alerting countless Pokémon to the change. Ash Ketchum and his companions Misty and Tracey Sketchit get caught in a freak storm, and are washed ashore Shamouti island, set in the centre of the Orange Islands. Learning the island festival celebrating the legend is about to begin, Ash is selected as the festival's chosen one by a girl named Melody, the festival maiden.

At the festival's banquet, Melody explains to Ash he must retrieve three glass balls from each of the legendary birds' islands and take them to Shamouti's shrine, guarded by a talking Slowking, where Melody will end his task by playing the festival's song, actually the song of Lugia. Ash immediately sets out, led by the troubled Pikachu. Taken to Fire Island by sea captain Maren, Ash and Pikachu find Moltres' treasure, but are interrupted by Team Rocket. Misty, Tracey and Melody arrive via Melody's multi-purpose boat, followed by Zapdos who attempts to conquer the island. Lawrence appears overhead, absorbing Zapdos' electrical energy and captures it along with Ash and co. accidentally. Meanwhile, Professor Oak, Professor Ivy, and Ash's mother Delia Ketchum fly to the islands but their helicopter crashes on Shamouti. Lawrence frees Ash and the others and attempts to capture Articuno, accidentally awakening Lugia in the process. Meanwhile, Ash and the others manage to free Moltres and Zapdos who escape and bring down Lawrence's hovercraft.

Afterwards, Articuno, Zapdos and Moltres have engaged in all out war, unleashing all of their powers in a bid to destroy each other. Ash and co. manage to escape, gaining Zapdos' treasure in the process, and are transported back to Shamouti by a mysterious water spout revealed to be Lugia. Lugia at first tries to stop the battle himself, but is outmatched by the birds powers combined against him. Telepathically he then explains the birds and the weather can be stopped by the legend's Chosen One, Ash. Ash agrees to go to Articuno's island to get the final treasure, but his progress is halted by the legendary birds. Team Rocket arrive on a speedboat made from a dingy and the helicopter's discarded propeller, wishing to save the world in order to continue their villainy. The group race up to Articuno's shrine and retrieve the treasure, but before they can escape, the legendary birds appear. Zapdos destroys the speedboat and Ash watches on as Articuno is knocked out by Moltres and Zapdos. Lugia rescues Ash and Pikachu, but Team Rocket heroically fall into the sea upon realising they are slowing Lugia down. Lawrence tries to catch Lugia, but Lugia uses its Aeroblast attack to destroy his airship and take out Moltres and Zapdos before collapsing into the sea.

Misty and Tracey rescue Ash and Pikachu, who venture to Shamouti's shrine and place the final treasure with the others. Melody plays Lugia's song, ending the storms and bringing peace to the legendary birds. Lugia rises from the sea, bringing the true Beast of the Sea with him, an underwater current that has been altering the climate. Later, after the birds returned to their islands, Lugia departs after thanking Ash. Delia and the professors arrive, Delia having witnessed her son's actions but asks him to be more careful which he complies with. Lawrence laments on his decisions, deciding to start his collection again. Team Rocket reach the island a day later, and are told by Slowking that the audience saw their heroics, the trio contemplating changing their ways. 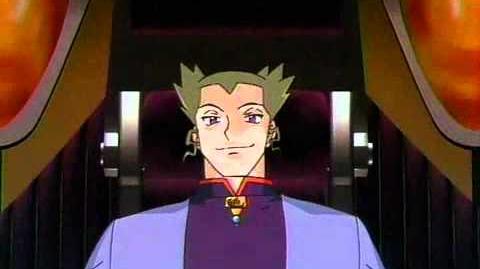 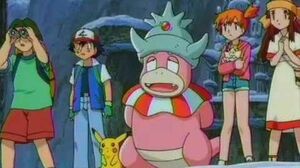