12:00 AM
Primal is an American animated series created and directed by Genndy Tartakovsky and produced by Cartoon Network Studios and Williams Street. The series is praised for its storytelling and emotion despite being devoid of any dialogue. The first half of season 1 aired on Adult Swim from October 7-11, 2019 and the second half aired from October 4, 2020 to November 1, 2020. The series has been renewed for a 10 episode second season that will premiere in the Summer of 2022.[3][4]

At the dawn of evolution, a caveman and a dinosaur on the brink of extinction bond over unfortunate tragedies and become each other's only hope of survival in a treacherous world.

Spear — A caveman whose tragedy begins when his mate and two children are attacked and devoured by a pack of horned theropods. Although he overcomes his initial urge to commit suicide, Spear is still learning to cope with the loss. Eventually, he develops a deep bond with Fang and is willing to make any personal sacrifice to protect her.

Fang — A medium-sized female Tyrannosaurus whose tragedy begins with the death of her hatchlings, caused by the same predators who killed Spear's loved ones. Initially, she attempts to assert her dominance over Spear, but eventually learns that it is far healthier to work in a partnership rather than with a pack mentality, and is willing to do anything to ensure his survival. 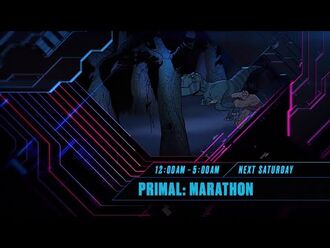 During the panel for the series as part of the Television Critics Association's Winter Virtual Press Tour on February 14, 2022, it was announced by the TCA that Primal season 2 will premiere on Adult Swim in the Summer of 2022. The second season's premiere date was later revealed to be Thursday, July 21st.

Primal has only had one marathon appearance during its run on Toonami, the Primal: Season 1 Marathon on November 28, 2020.